We were both up bright and early today...it is a travel day and we wanted to get an early start because we were going to stop at Service Tire—a businesses advertised on the park information pamphlet—to have the trailer tires rotated.

All was going smoothly until Steve jumped in the truck and fired it up...the ‘brake service light’ went on along with the warning alarm...just great! This is the same thing that happened back in November when we were camped just outside of Savannah. At that time it had been a faulty flow switch that had to be replaced. We continued to get the 5th wheel hitched-up and after stopping at the sani-dump, continued on our way. The warning alarm had stopped but the service light was still on...it eventually went off. The brakes seemed to work fine as well...whew...but we will definitely have to get that checked out before we continue west on the Interstate!

Steve also noticed that the Hensley trailer brake controller that he replaced last month under warranty was reading 0 amps when the brakes were applied. Great....should have stayed in bed...everything worked fine yesterday!!!

Once at Service Tire, Steve managed to get the trailer backed into the spot they wanted us so they could take care of the tires...he also asked them to switch the valve stems to steel so that he would mount the tire pressure sensors on them. Unfortunately, they had an old, very slow fellow working on our tires so it took a lot longer than it should have...we were there over 2 hours. But the manager did give Steve the name of a GMC truck dealer...Martin Truck Center which wasn’t too far away. Steve called them and they said that they were really busy but they would take care of us when they could.

We arrived at Martin Truck Center around noon and they directed us to back into a spot where we could wait for a mechanic...this was to be our new camping spot for at least one night...likely longer. We sat outside for the whole afternoon waiting...and waiting for a mechanic to come over and take a look. Steve was reading and I was trying to get our blog posted...constantly fighting with the sporadic internet connection.

Around 4:00 we finally decided we might as well unhitch, put the sliders out and unpack the trailer. Steve even set up the satellite dish and managed to get a signal fairly easily. After another trip up to the office, Steve found out that they wouldn’t be able to get to us today...he gave him the code to the gate in case we had to go out. 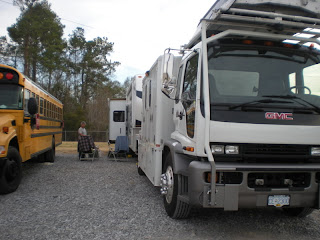 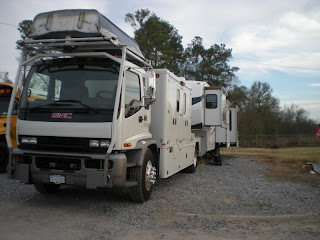 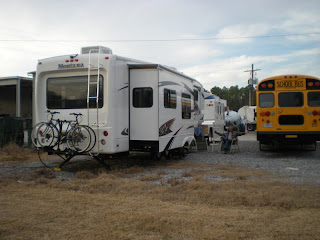 One thing Steve was happy about was being able to get the generator out...we hadn’t used it since we were at Reed Lake in northern Manitoba last August. So we sat inside watching TV all evening. It was very bright outside as all the flood-lights came on when it got dark.

So...here’s to better luck tomorrow...hopefully we’ll get the problem fixed and be on our way!
Posted by Dianne and Steve