It was cold, windy and cloudy this morning...not exactly the type of day I like to travel in. I would prefer blue sky and sunshine as we drive along the highway...but, oh well...at least it wasn’t raining out.


We got the trailer all packed up and then since we hadn’t fuelled up last night, we drove to a station just outside of the campground that we had noticed diesel was $3.18/gallon. All of the diesel pumps had plastic bags on them. Sheesh! We then drove a few miles back down the highway to a station with a higher diesel price...$3.29/gallon. Of course, the first hose Steve tried didn’t work and another truck had driven up and was using the other one, so we had to wait for him to finish. Oh man...was that wind cold! 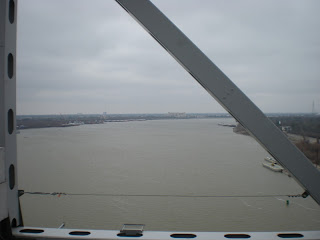 It was after 10:30 by the time we got back, hitched up, emptied the holding tanks at the sani-dump and were finally on the road. As in many parts of the New Orleans area, there is major road construction going on and it just so happened that the route Serena chose to take to I-10 involved going over a very narrow bridge that was having traffic delays as a crane lowered new bridge X beams into place. Timing being such, all traffic going in our direction was stopped just as we were in the middle of the bridge. So there we were stopped high up on this bridge...smack dab right in the middle of the Mississippi River! 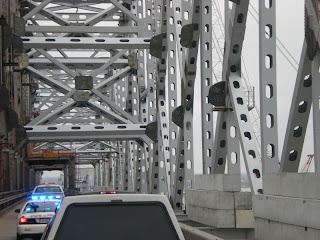 To make matters worse, traffic going in the other direction was moving and the bridge actually shook as we sat in the truck! We sat there close to 30 minutes before workers had finished doing whatever they were doing and finally allowed traffic to continue across the bridge. Steve met a fellow (Ron) at the campsite that told him about a narrow bridge to stay away from if you’re in a big rig. Great....we found it! He said that back in the day the engineer that designed the bridge hated the teamsters so he deliberately made the lanes too narrow for trucks.....so we took up both lanes. 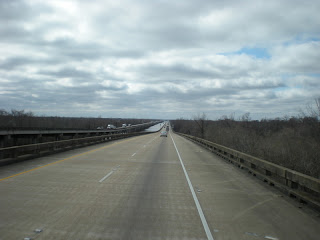 Before long we were heading west on I-10 and our destination...Sam Houston Jones State Park which is just outside of Lake Charles, Louisiana. It was very interesting as we travelled along the interstate...much of the highway is raised going over vast areas of bayou. As I have said before, they sure know how to make bridges down in these parts.... but not smooth roads. You feel like you’re riding a bucking bronco on parts of I-10! We haven’t experienced such rough roads since Edmonton and northern Manitoba. There is so much cement in their highway construction even when it’s not a bridge.
It was around 3:30 when we arrived at the park. The young girl in the office, gave us a map with available sites marked on it and we continued into the campground to pick out which one we wanted. Although a little tricky backing into site #44 because of two huge trees on either side of the driveway, Steve manoeuvred the trailer back in with little trouble. We chose this site because it was at the end of the road and much larger than most others. There would be no one on our awning side so we would be able to sit outside with an unobstructed view of the big pond/bayou that was across the road. Again, our site had water and electrical hook-ups for $16/night. There are some sites with sewer as well (for $18) but none were available for the 4 nights we were staying...besides we liked the site we had chosen anyway. Many of the sites are close together without much room or privacy.

Once unhitched and levelled off, I was happy to go inside and get the heaters going. I was lucky to do my set-up inside out of the cold...poor Steve was chilled right through by the time he came in. It didn’t help standing outside trying to latch onto a satellite signal in 39F temps. He finally gave up and came in to warm up...we’d watch taped programs on TV tonight and try again tomorrow.
This is the view from the window...while I sat...all nice and cozy in front of the fireplace... 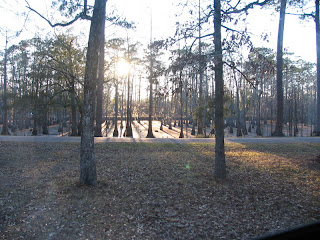