Wow...its February already! These weeks and months are just flying by!

After more research on local tire dealers yesterday, Steve found a place in Pensacola to take the truck to have the tires changed over from being filled with air to nitrogen. Vannoy’s Tires had good reviews and with a number of locations in the Pensacola area, he chose one fairly close to GCR Commercial Tires. After getting the nitrogen in the tires, we could go to GCR for a tire rotation.

So there would be no dilly-dallying this morning...we needed to get to Vannoy`s early because it would likely take a while to do all 6 "big" tires. There was also a storm coming in later this afternoon...with all sorts of warnings—from high winds, rain and thunder to possible tornadoes...so we figured we should get the work done and get home.

We arrived at Vannoy’s just after 8:30 and started the work right away. They had a great WiFi signal inside their waiting area, so I sat with the laptop and updated our travel blog. The pictures uploaded so quickly...it was great! So...you got lots of pictures to look at! The work took a good couple of hours...which wasn’t as long as they had originally thought it would take. So it must have been around 11:00 when we were finished there and headed to GCR for the tire rotation. Steve installed the tire pressure/temperature sensors http://www.tsttruck.com/ before each tire was re-installed. Because of the anti theft design of the sensors they are extremely difficult to install on the rear dual tires. There is a special wrench that fits over the sensor that makes it difficult to install. The valve stem on the outer rear wheels point inward through a small hole and the inner wheel valve stem is almost impossible to get at. Steve still has to program the display monitor to the sensors once we return to the campsite. The trailer tires will have to be done at some point as well. 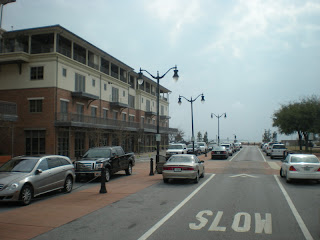 We were all done by 12:30. We had considered going back to the Aviation Museum to finish up our visit from the other day but decided against it. The weather was not looking very good. So instead we took a drive through the historic district of Pensacola and then headed home. 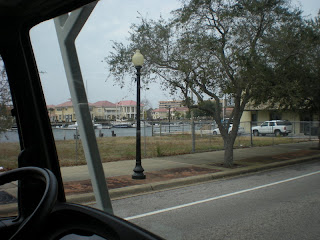 It was very, very windy out! But mild which was nice...69F. Unfortunately, a cold front was coming in and the temperatures were expected to drop...another cold snap...we’ve experienced plenty of those here in Florida! We are on the fringe of that major storm system moving from as far south as Texas up through to the eastern seaboard of the US and Canada. 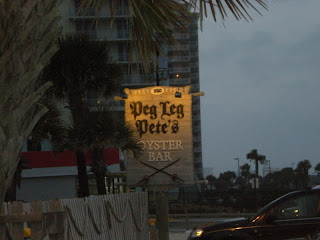 This would be our last night in Florida so we decided to go out for a feast of seafood. We had heard (and read) that many restaurants offer early bird specials if you are there before 5:00 so we thought we would try to cash in on that deal. We headed off to "Peg Leg Pete’s Oyster Bar" just after 4:00. This is a restaurant that is on the road to the park and campground so we have passed it many times over the last 5 days and the parking lot always seems full...a good indication, we thought! It didn’t have any early bird specials, though...oh well. 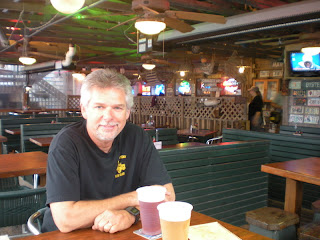 We started off at a table that was out on the enclosed deck and had a drink taking in the funky atmosphere. But the clear plastic "walls" enclosing the deck were flapping wildly in the wind... 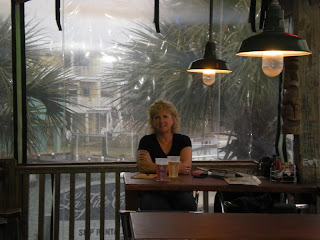 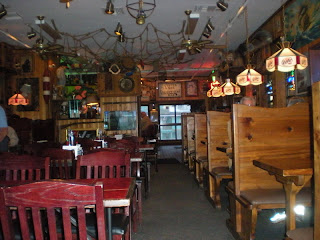 ...so we asked to move inside and were given a nice table for two by a window. We asked the waitress if it would be possible to order just one of their baked oysters...we would love to try one but didn`t want to order a half dozen and not like them. Soon two parmesan-crusted baked oysters arrived at our table...they were very tasty but then I think the major flavour came from the coating. We ordered dinner shortly after having our appetizer. Steve ordered Stuffed (with crab) Shrimp and I had the Mixed Grill (shrimp, scallops and grouper filet). Both meals came with rice pilaf, snap peas and garlic toast...and were absolutely delicious! We had a wonderful evening!
On our drive back out to the campground, we were treated to a spectacular display of lightning. We couldn’t hear any thunder yet but the sky was completely lit up by the lightning and the wind was just howling!
Once back at the trailer, we snuggled down in front of the fireplace, with lights off and blinds open watching the display which now included the roar of thunder. We weren’t too crazy about the gusts of wind that would shake the trailer though....
Posted by Dianne and Steve