Well...the name of the game today was...wait, wait...and wait. Had we known that we would be boon docking for a day or two, we would have put more water in the tank. As it is, there is very little...so that left Steve filling up our 5 gallon water jugs...quite an inconvenience!!!

Steve decided to call Hensley Manufacturing about the brake controller that was no longer working. That lead to many phone calls...and because the signal wasn`t strong enough for our cell to stay connected, Steve had to walk back and forth to the office to use their land line. There’s no troubleshooting info in the installation manual so Steve was told to do a reset on the controller. That only worked the first time the brakes were applied. The next time they were applied the amps remained at 0. Hensley called back to say that they were out of the upgraded controller that we purchased to replace the original version. Our options were to wait a week.....can’t do that....or accept the original version to get us going and switch out again to the upgraded version in the future. Sheesh!!! Steve doesn’t have a warm fuzzy feeling with this brand of controller any more as this will be the third failure in 8 months!

It was around 11:00 when John, the mechanic finally came walking over...complete with laptop in hand. He and Steve headed to the truck...I went back inside the trailer. Next thing I know, Steve is telling me they are going for a test drive. John got the fault code indicating the flow switch failure but still wanted to see if he could duplicate the situation with the laptop connected while they do a test drive. Steve assured him that from past history once the warning lights and alarm go off they don’t come back on. It was now Johns lunch time so he said he would be back for the truck when it cools down.


John came over as I was making sandwiches for lunch and took the truck over to a service bay...hmmm...that`s hopeful. This picture is taken from inside the trailer looking out the window... 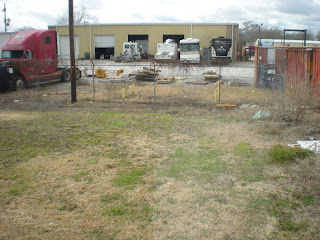 At least it was a nice day out...broken cloud with the sun coming through frequently and the temp was up into the low 70`s. So after lunch, we decided to have an afternoon siesta...setting our chairs out in the sun and taking in the rays...ahhhhh...

At about 3:00, Steve decided to walk over and out the status on the truck. About 45 minutes later, he came back with the truck...``the part would be delivered tomorrow...let`s go to the mall so I can get a haircut!`` So off we went.

I wandered around JC Penny for 20 minutes while Steve got his hair cut. On the way out we passed a mattress store...`Sleep Number` and found out all about their mattresses, as well as tested them. I really like the ability to adjust the firmness of my side of the bed independent of Steve. But the mattresses are pretty expensive and this was our first stop. Also they don`t keep inventory in the store—the mattresses are custom made and shipped...another problem for us.

Once home, I prepared kabobs for dinner while Steve filled up a water container and got the generator going. After a yummy dinner, we settled in front of the TV...and that was our day!

Hopefully, all goes well tomorrow and we get on the road by early afternoon!
Posted by Dianne and Steve at 8:20 AM