We woke to cloudy, dreary skies this morning...more rain is in the forecast today. As the morning progressed though, little bits of blue were breaking through...it might not be too bad a day after all.

After breakfast Steve borrowed Earl's portable sani-station so he could use the water to wash my quad...thanks, honey! While he was doing that, I changed the bedding and got the laundry ready to head off to the laundromat. 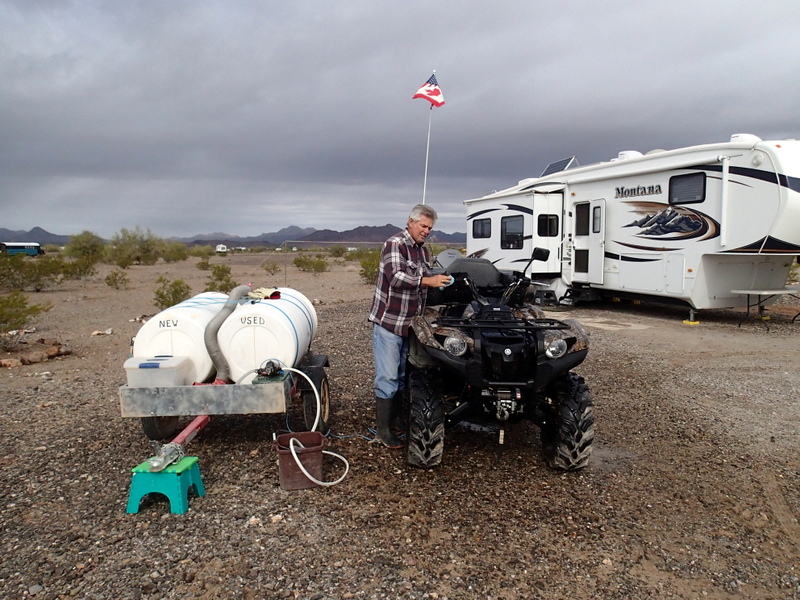 After he was finished washing my quad, Steve organized a spot in the truck where we could put the laundry bags. There was some blue sky and sunshine starting...gee maybe I'll be able to hang the laundry on the clothesline after all. 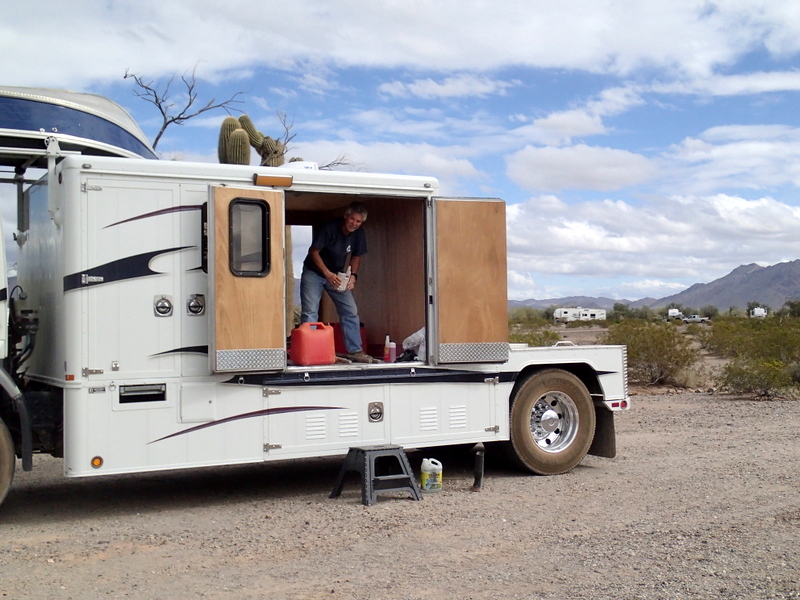 We were just about to load the laundry bags into the truck when we had visitors. Bill and Janet Snider are from Vancouver Island and belong to the same ATV club we belong to...Cowichan Valley ATV Club. Bill follows our blog so knew where we were and also knew we were leaving tomorrow, so wanted to pop in to say hi. They are down here on vacation and have just come up from Yuma...where they had to have their motorcycle trailer fixed after it was hit by a reckless motorist...not much fun at the best of times but especially when you have limited time while on vacation. We chatted for a bit and then they were on their way to Lake Havasu.

Shortly after 11:30 I headed into Q to do laundry. When I left there was a big gap in the clouds with lots of sunshine coming through, so the plan was to bring the wet laundry back and hang it to dry on the clothesline. I had just loaded all of the machines when my cell phone rang...it was Steve, the clouds had returned and it looked like rain, so you had better use the dryers at the laundromat. Okay...see you in a couple of hours! At least the laundromat wasn't busy so I didn't have to jockey for available dryers! I also had a great surprise while there...Donna and Bill spotted the truck and stopped to say hi. We met up with them not long after we got to Quartzsite {Donna is Mike's (our brother-in-law) sister}. They have been travelling around Arizona since we last saw them. It was great seeing them again, even if it was for just a short chat.

I was home at about 2:00. Steve continued his packing up by loading my quad into the truck while I put the laundry away...then we hitched the trailer to the truck. It was going on 4:00 by the time he was finished. We were all packed up with just the satellite dish and generator to put away in the morning...plus my pack up of the inside, of course. 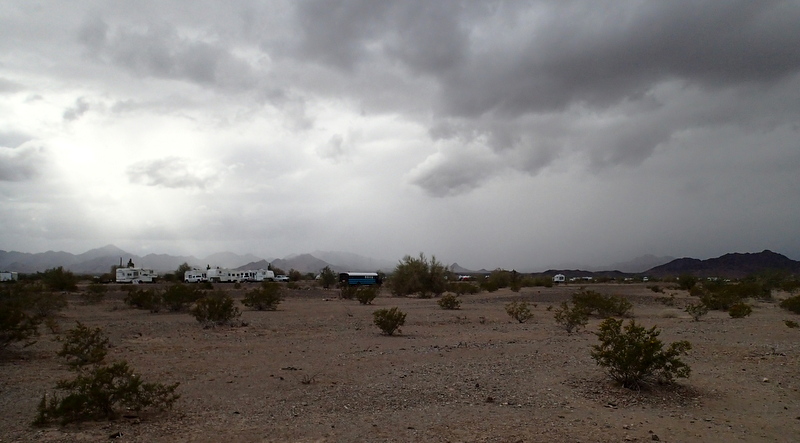 The work was finished just in time as the wind picked up and dark, rather ominous looking clouds moved in. Earl and Allison were having everyone over to their place for happy hour this afternoon...hmmm...it doesn't look good...don't think it will be very pleasant sitting outside. Sure enough, Earl called at 5:00 to say "the party was cancelled"...it had also started raining by this time. Darned weather...especially on our last night at Quartzsite! Sheesh! 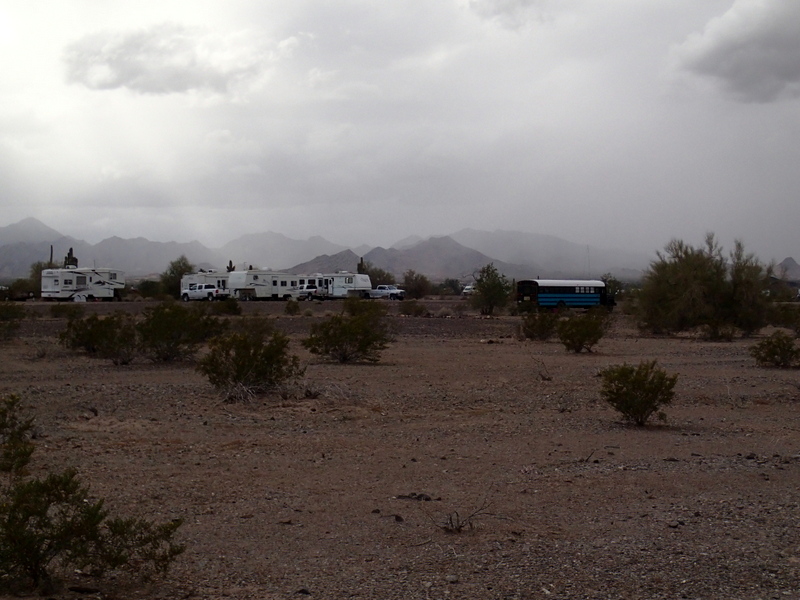 About an hour later, there was a break in the down pour and a slight rainbow appeared over Earl and Allison's trailer... 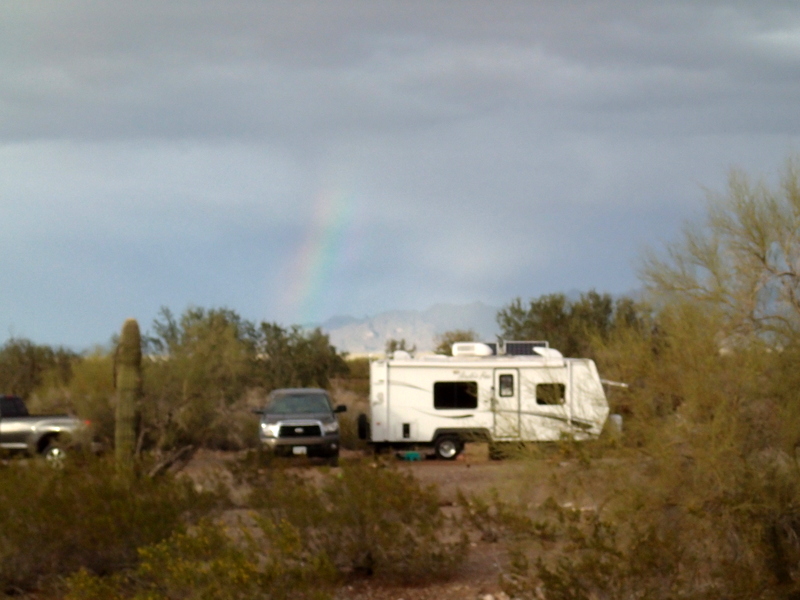 We settled in front of the TV for the evening...well, I settled with my kindle reading. Our last night in Q...it's been a great winter but we are looking forward to Estrella Mountain Regional Park in Goodyear...and seeing Ken and Charlene, our friends who are visiting from Cochrane, Alberta.