I was awake really early again this morning...it was just before 5:30 when I decided to get up and turn on the coffee maker. About a half hour later, Steve got up...what?...Steve is up at 6:00 a.m.??! Apparently he had also been awake since before 5:00 and finally decided to get up. He had a great suggestion... ”Why don’t we go down to the beach and watch an Atlantic Ocean sunrise?” What a great idea, honey! The sun doesn’t rise until 7:24 so we had a little time yet. So Steve showered while I finished yesterday’s entry in the travel journal. 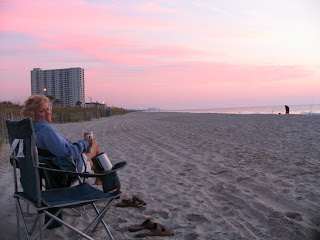 We headed down to the beach just after 7:00...with our chairs, coffee and, of course, camera. It’s just so peaceful first thing in the morning. There were already a number of people out for their morning walk and quite a few fishermen were already staking out their spot on the beach. We set up our chairs and sat down to enjoy the serenity of the early morning sunrise. 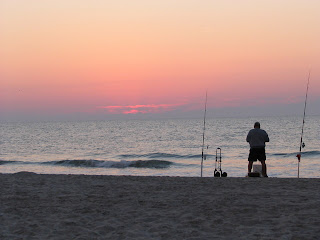 As it got closer and closer to 7:24, the sky got pinker and pinker...just beautiful! Then the sun appeared...first as just a bright glow on the horizon and then as a great ball of red and orange as it greeted the morning. What a lovely way to start the day! It was going to be another hot day with the temps in the low 80’s but there was a slight possibility of showers this afternoon. 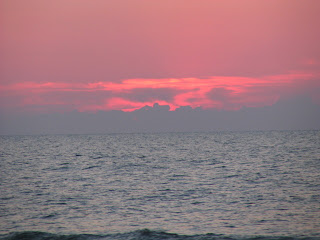 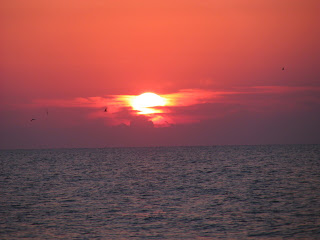 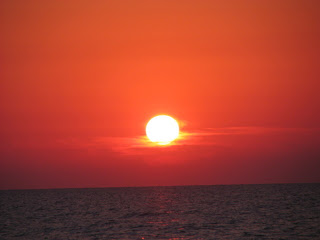 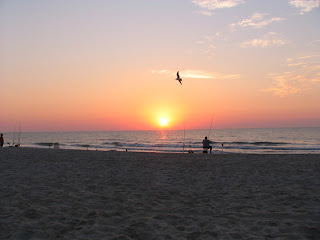 And it was a very relaxing day...after breakfast, we went for a walk on the beach, south to the Surfside Beach Pier. That was a good hour walk that I really needed! Other than yesterday when I did some major housecleaning, we have walked on the beach everyday...love it!

This afternoon we decided to go relax and do a little sunning by the pool. The water was a little warmer than yesterday...but not much! Unfortunately, we were plagued by a light cloud covering that would come and go...hmmm...maybe the slight possibility of showers were on the way.

Around 3:00, we headed back to the trailer and got changed out of our wet suits. We were sitting out in our lounge chairs discussing where we were going to head when we leave Friday when we felt a few rain drops. We put the chairs away and went inside but the rain didn’t develop into much...more like “hardly any showers”.

Steve took some pictures of the spic-n-span truck and 5th wheel... 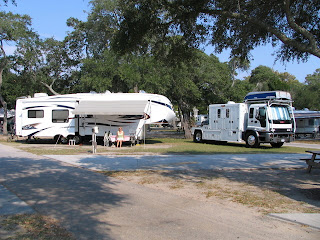 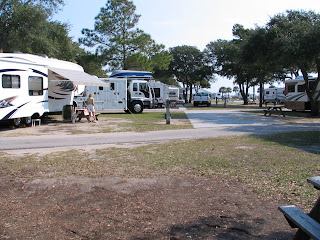 We had been trying to get onto the internet but for some reason couldn’t...we had been blocked! There was a text message from Rogers saying that we had exceeded our data plan and for security reasons I was to call them. Well, I wonder what that was all about. So I packed up the laptop and walked up to the free WiFi area so I could make a Skype call to them. It wasn’t very busy up at the “Meet N Eat” area so I was able to find a secluded spot in the corner where I could make the call. It was a really good connection on Skype. The first person I spoke to could not figure out why I had been blocked so they passed me onto their “investigation” section. After being put on hold a couple of times, she explained that there was nothing on my account to indicate why we had been blocked but since we were in the States and on AT&T network they wouldn’t know our usage until they received the info from them. She asked if I had done any downloading of big files...hmmm...oh, oh....I had downloaded 2 episodes of Survivor since we had missed them and wanted to be up-to-date before watching it tonight. Well, both of those files are over 500 MB...so yeah...I guess I had done some major downloading!! I would say that blunder is likely to be a little costly...oh well...this is all a learning experience!! She gave me some tips on using the data stick...like taking advantage of free WiFi service where possible (duh, eh?!) and unblocked our Rocket Stick.

After a yummy steak dinner (and cleaning up afterwards), we went for a walk around the campground before setting in to watch Survivor and Criminal Minds. I can’t believe we only have one more day here...guess we had better figure out where we are going to go on Friday!
Posted by Dianne and Steve at 5:03 PM