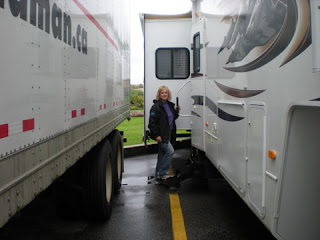 We woke up to another dreary, cloudy, rainy day...but I had a better sleep than I had expected to have. I knew trucks had arrived during the night but was Steve ever surprised when he opened the door to go outside...there was a semi parked right beside us, just inches from the slider! And there was another one on the other side! Too funny....man, those truck drivers are good! 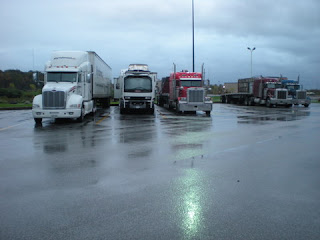 We continued traveling east for a short distance and then took Interstate 79 south through Pennsylvania and into West Virgina. What a beautiful State! The highway wound through high rolling hills and valleys...they probably call them mountains here but to us, they are big hills...nothing like the mountains we have in BC.

We arrived in Charleston, WV close to 5:00. Tonight we would be camping in a Walmart parking lot. We stocked up with some groceries and after getting them all put away, I thought I would fire up the laptop and see if we could get any internet connection. To my surprise, we were soon connected! YAY! I left Steve surfing the net and answering some emails while I returned to Walmart...I had forgotten to get a new black ink cartridge for the printer. We needed to print off the directions to Gilbert...they had recommended that visitors with large vehicles not take the route that is normally suggested by most GPS’s...and had provided direction for an alternative route.

Beautiful sunset from our campsite at the Walmart parking lot.... 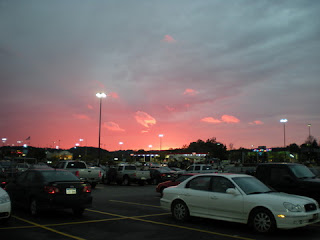 When I got back, I shooed Steve off the laptop...he went to bed to read for a bit, while I had my turn on the laptop. I caught up on a few things...then headed to bed for a "peaceful" night in the 24-hour Walmart parking lot.
Posted by Dianne and Steve at 5:03 PM