We had just finished up the breakfast dishes when there was a tap on the door. Ben and Carol had stopped by to see our truck and 5th wheel and to say goodbye. We showed them around, had a nice chat with them and then they were on their way. And soon we were too...we were going to Beaufort today.

Beaufort is one of only a handful of U.S. towns that has had its entire downtown designated an historic district. Filled with mansions built by the wealthy plantation owners before the Civil War, Beaufort was one of the only Southern towns chosen to be occupied by Union troops, rather than destroyed. More than 50 historic structures have been identified in Beaufort, including many lovely private homes that have been beautifully restored and are now available to view via professionally-guided walking, bus, or horse-drawn carriage tours. If you are interested in reading about the history of the area check out this link... http://www.beaufortsc.org/what-brings-you/authentic-history.stml 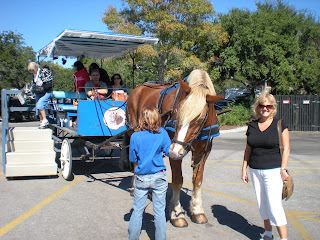 We decided to take the horse-drawn carriage tour. The young girl handling Duke, the horse, was excellent...she promptly told everyone that she was 24 despite looking like she was 12....Steve thought maybe 9. Duke is a beautiful...HUGE...horse. He has been recorded as the second largest draft horse in the world. His former job was hauling barges up river in another state however there was a problem in finding other horses that could match his size and strength as a two-horse team so he was retired and brought to Beaufort.


The area has been used to film a lot of movies...Forest Gump (she pointed out Tom Hanks’ favourite restaurant where he would go after a day of shooting and randomly ask people if he could join them at their table)...The Big Chill...just to name a couple (because I can’t remember the rest).
This is the bridge used in filming Forest Gump and it had a "Welcome to Mississippi" sign on it...well, they forgot to take it down for 3 days after filming...very confusing for some tourists!! 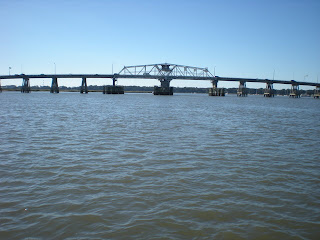 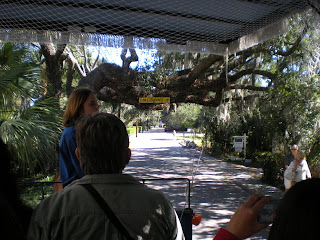 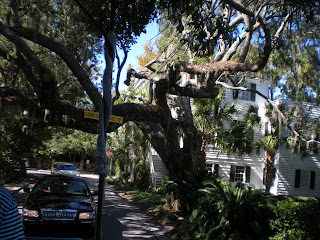 There is Spanish Moss growing all over the trees...apparently it isn't actually moss but belongs to the pineapple family...really??  There are also teeny tiny little bugs that live in it...so you have to be careful... 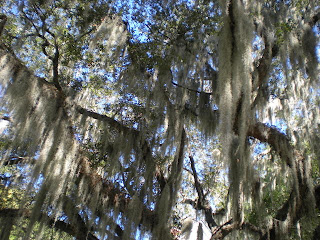 Such beautiful stately homes...most were summer homes where they did a lot of entertaining--big parties to introduce their daughters to young men in hopes of getting them married off....(oh the good ol' days!) 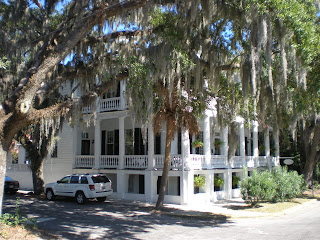 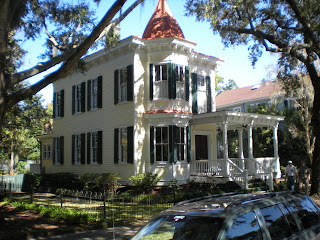 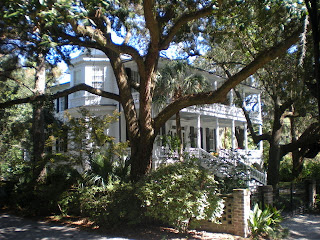 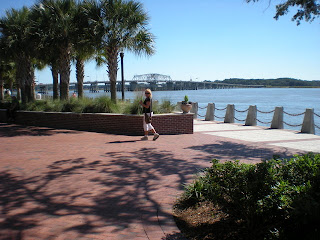 After the carriage ride, we had about 40 minutes before going on the boat tour up the river so we wandered around the waterfront park where a band was providing the entertainment. It was a beautiful tourist area. 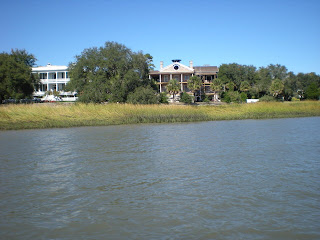 The boat tour was about an hour and a half and he pointed out some of the same historic mansions as in the carriage tour...we were just much further away and of course, were seeing them from the water front instead of the street front. 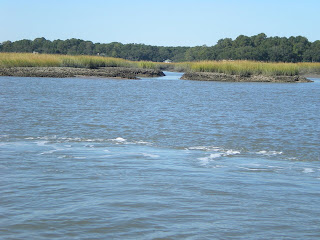 We did learn a lot about the marine life, though, and the inland marsh tributaries. Basically this area consists of 1300 inland islands but you would never know that from looking at a map or even Google Earth. 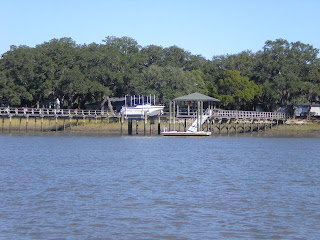 The water looks dirty like the Fraser River from being so nutrient-rich and isn’t polluted because there are no factories in the area. A lot of the boats are raised out of the water to prevent rapid growth on them. 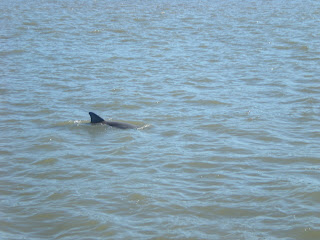 We saw a small Atlantic Bottle Nose Dolphin feeding on the shrimp. 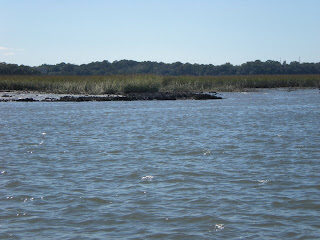 The brown clumps in this picture are oysters. They require sunlight to kill off organisms in them so they grow only between the low and high tide levels and are very edible. 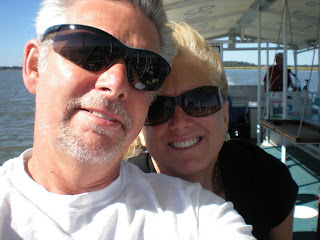