We were up and out by 8:30 this morning and with the address programmed into Serena, we made our way to Advantage Truck Centre. It was back up on I-77 north of Charlotte and took us about a half hour to get there.

They had a nice customer lounge with nice big comfy leather chairs, so I settled in there with my laptop as Steve took care of the details. In addition to having the truck receive its first service, he wanted to see if they could also paint the front bumper. The paint had started to peel off weeks ago so it should be a warranty issue. Well...he wasn’t too happy to learn that a warranty claim had already been put through on the painting of the bumper...when the truck only had 15 kms on it!! After a rather unpleasant phone call to the dealer we bought it at in Surrey, the fellow gave Advantage Truck Centre his VISA card number to pay for the re-painting.

With that settled, the truck would not be ready until tomorrow so we decided to rent a car. We had a hellava time finding one because there is a big Nascar Race happening here this weekend and all the cars have been rented out already. But we finally managed to nab the last car that Triangle Rent-a-Car had...a Chrysler 300. The fellow from Advantage was nice enough to drive over to pick it up. 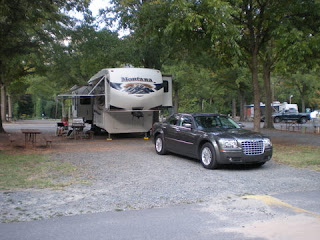 Wow...what a difference riding in a car from the truck! It felt like we were so low. When we were in Hawaii last year with Steve’s sister, Nadine and her husband, Mike, we had started out with a Chrysler 300 but it was a very plain model and not particularly nice on the inside. This 300 was the Touring Edition and quite luxurious...a far cry from the one we had in Hawaii (that we actually ended up trading it for a Lincoln Towncar due to issues with the front wheel of the 300).

On the way back to the trailer, we stopped at the South Carolina Visitor’s Centre and picked up a bunch of pamphlets on the area. We thought we would explore around a little this afternoon. After a quick lunch at home, we headed out...first to find a grocery store to pick up a few things...then to sight-see a bit.

After a drive through Rock Hill and Fort Mills, we returned home. I wasn’t feeling to spry with my cold and really didn’t feel like doing too much.

We sat outside and chatted with our neighbour in a big diesel-pusher. He is from Georgia and gave us suggestions of areas to visit there.

We had a quiet evening watching TV...I just wanted this stupid cold to go away!!!!
Posted by Dianne and Steve at 3:14 AM