I was up just after 5:30 this morning...it was the coughing that got me up so early today. There’s “stuff” trying to get out of my lungs...but I won’t go into any further descriptive narrative than that!! 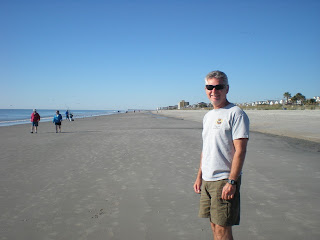 It was going to be another beautiful day today...supposed to go up into the 80’s. We decided to go the opposite direction down the beach on our walk today...to another pier. This one was about a half hour away in the community of Surfside Beach. There were a few fisher people out but not as many as yesterday...and the tide was way out making the beach even that much wider. We had decided to wear our walking shoes today...much easier on our feet (knees and back) when walking on hard packed sand. But not as easy to cross the small creeks that cut across the beach. We were able to jump across most of them...there was only two spots where we had to walk up to the top of the beach (through all the soft sand) to a bridge. 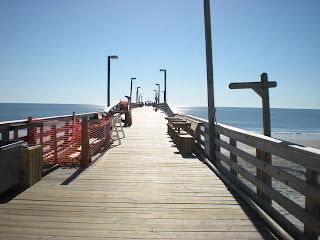 I always thought that I walked at a good pace but trying to keep up to Steve when he has to go pee is quite a challenge...especially when he spotted the restrooms at the entrance to the pier!! Too funny! This pier is privately operated and maintained so they charge a $1.00/person to walk on it. We wandered through the gift shop and peered through the windows of the restaurant as people were enjoying their Sunday morning brunch but did not go out on the pier. I took pictures from the gate instead.

Once back at the campground, we relaxed with a bottle of water...whew...that was a good walk! There wasn’t the breeze today like there had been yesterday so it seemed much hotter...and it was only 10:30!

After changing into my “going to town” clothes, we headed into the city of Myrtle Beach to do some sightseeing. With the weather being so beautiful and with lots of people still around, we found it odd that so many of the businesses were closed for the season. I can only imagine what it must be like here during the summer months! 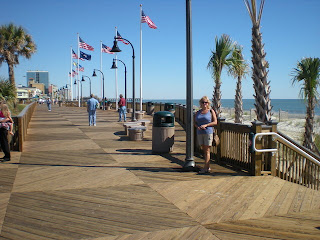 There is a newly constructed Boardwalk that runs between two piers, so we parked the truck on Ocean Boulevard and walked to the 14th Street Pier at the northern end. There was a cool looking restaurant at the foot of the pier and it was noon, so we decided to go in for lunch. We selected a table on the deck, looking south. 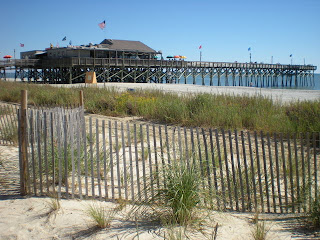 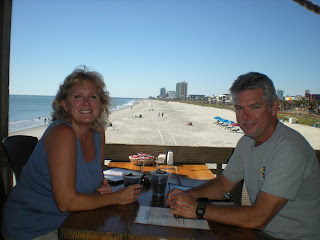 After lunch, we sauntered down to the end of the pier and back and then decided to walk back along the Boardwalk to the other pier...we were certainly getting our exercise today! 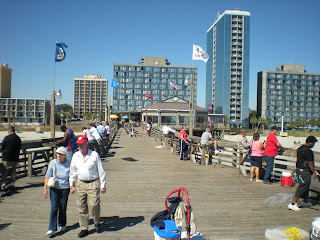 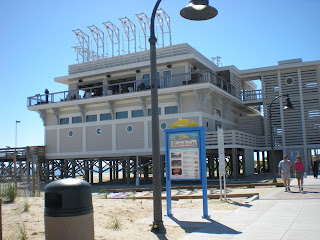 The 2nd Avenue Pier also has a restaurant and gift shop. We understand from chatting to some local people that the 2nd Avenue Pier has just been refurbished. Actually the whole Boardwalk between the 2 piers has only just been completed fairly recently. 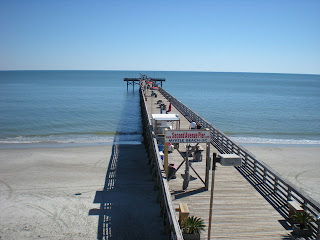 We checked out the pier and took some pictures (without going out onto it...after all...once you’ve been on one pier...........) and then headed back to the truck. We were hot and tired by the time we reached the truck. It was so good to sit down and get that air conditioning going!

We continued our sightseeing tour along the waterfront heading north through Myrtle Beach. There are literally hundreds of hotels/motels, resorts and vacation homes/condo all along the waterfront. As I said earlier, a lot of them are closed for the season.

About 8 miles further north is the city of North Myrtle Beach, so we decided to carry on and check it out as well. Other than just a brief break in the oceanfront boulevard where you have to take the highway, it is really just a continuation of Myrtle Beach. There is actually 60 miles of beach along this stretch of South Carolina (called the Grand Strand) with a number of smaller communities. North Myrtle Beach is at the most northern part, with Myrtle Beach, Surfside Beach, Garden City Beach, Murrells Inlet, Litchfield Beach and Pawleys Island dotting the coast as you head south.

We were home just before 3:30 and I immediately tried calling Dennis and Suzanne (brother and sister-in-law) using Skype. The connection wasn’t great but it was still so nice seeing them while we chatted. It was so good talking with them!

After that, we sat outside enjoying happy hour! We met our next door neighbour, Gil, a fellow Canadian from Ontario. He and his wife come down here every year for their vacation.

After dinner, we watched a little TV (as usual) and then headed to bed...the end to another wonderful day!
Posted by Dianne and Steve at 8:04 AM