Today was one of those days where you wish you could just go back to bed and get up again and start all over!

It must have been around 10:30 when we were all packed up and on the road. It was a short distance to the Fort Erie and the Peace Bridge border crossing into Buffalo, New York. When the border guard asked where we were going Steve said the Hatfield McCoy Trail Fest in West Virginia. After a few moments of silence he handed back our passports and said...if a couple gets married in West Virginia ...moves to Michigan and gets divorced are they still brother and sister? Well did that ever catch us off guard! Nice to see a friendly border guard for a change. We had no problem at the crossing and were soon on the I-90 heading east along the southern shore of Lake Erie. This is when Steve asked if I had phoned Pacific Blue Cross and purchased our travel insurance...oh dam...no...so I immediately got on my cell. Now....I made one fatal error...when the agent asked where we were now, I said we had just crossed the border into New York State...DUH! We had already left the country so she was unable to sell the medical insurance to us. Great...here we were...planning on being down in the USA until mid-December and we had no travel insurance!! I tried to back-track but it was too late, the damage had been done. So to make a long story short...we went all the way to the Pennsylvania border, turned around and went back to Buffalo and crossed into Canada. 284 KM and 5 hours later we were back where we had started from! We found a big parking lot in Fort Erie and waited while I sat on hold waiting to talk to an agent. I finally got through and after giving her my long spiel and reassuring her we were back in Canada, we had our insurance and were good to go...again. We needed to be able to prove we were in Canada when we purchased the insurance should we need to make a claim.

We got a bit of an interrogation when we went back across the border but after explaining what had happened and answering a few more questions, we were on our way. It was now just after 3:30 p.m. We drove the toll highway again...this time we had some US cash...we got thoroughly ripped off the first time we went through. We paid with Canadian cash (they don’t take credit cards) and the $11.80 toll became $17! This time we saw the sign that the exchange rate was 10%...I really don’t know what math the fellow used but the toll should have been $12.98 Cdn...Oh well. 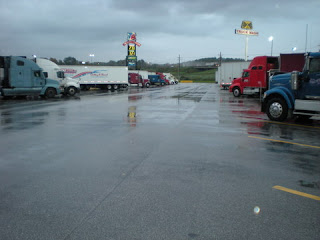 We stopped at a truck stop just outside of Erie, Pennsylvania and fuelled up. Since it was getting late and just pouring out, we decided to stay the night. This is the biggest truck stop we have ever seen! Steve chose a nice secluded spot and backed in. We put the slides out, cleared off the bed (that’s where the printer and satellite dish go while we are in transit) and then decided to go for dinner. Armed with our umbrellas, we dodged puddle after puddle...and semi-truck after semi-truck...over to the building where there was a big restaurant as well as all the professional trucker services—showers, laundry, store, resting lounge, etc.
After dinner, we returned to the truck and watched another downloaded movie. It sounded pretty busy outside as trucks pulled in. I wasn’t expecting to have a very good sleep tonight....
Posted by Dianne and Steve at 4:56 PM