It was shortly after 11:00 a.m. when we said our goodbyes to Garth and Donna. We were heading to Niagara Falls, a relatively short two and a half hour drive today. 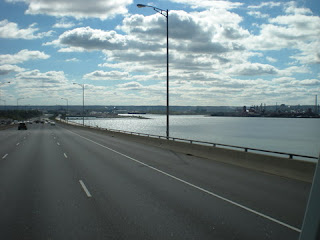 We managed to navigate the maze of freeways going every which way, encountering only one small oops on the way...but we were soon on the highway we were supposed to be on. We went over a huge bridge that crosses a corner of the lake by-passing Hamilton. The QEW highway took us by vineyard after vineyard...and winery after winery...towards Niagara Falls. We took the exit at St. Catherine’s, hoping that Serena knew where she was taking us...but have no worries...we soon arrived at the Campark RV resort.

After checking in, we continued to our assigned site, #304, a large pull-thru. We got levelled off without too much difficulty and soon the sliders were out and I was doing my thing inside while Steve did his outside.

Once we were all set up, we sat outside for awhile enjoying the little bit of sun that was available, and chatting to people...our truck seems to always garner attention from curious passerby’s. Once the sun disappeared for good behind a cloud, it got quite cool out so we headed inside.

While we were eating dinner, there was a knock on the door. It was a fellow from Adventure Tours promoting their half-price special. We decided a bus tour of the area would be a great idea so we signed up for it. The bus would pick us up by the front entrance at 9:15 tomorrow morning.

After dinner and dishes, we decided to go out for a walk. The campground had been busy preparing for their first Haunted Hayride (complete with Haunted Manor) and the roadways had been decorated with all sorts of creepy things...so we wanted to take a look.
They had done a very good job... 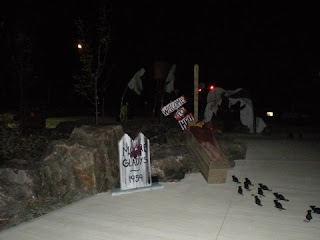 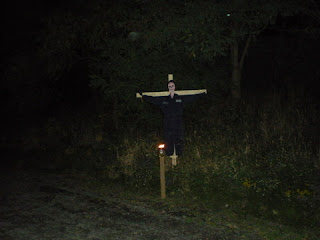 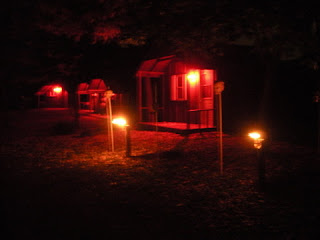 After our walk, we cozied up in front of the fireplace and watched a little TV before heading to bed. We were looking forward to our tour tomorrow.
Posted by Dianne and Steve at 8:04 AM