We had a slow start to the day. There were not many campers left and those remaining were quickly leaving this morning. The grounds had to be cleared out my noon...and it was just after 12:00 when we said our goodbyes to Sherry and Andrew.

As we drove out, the crew from OnTrackTV were packing up all their equipment and were taking pictures and waving as we drove by. We continued on Hwy 80/52 south and it wasn’t long before Steve was asking how much further before we are on an Interstate. He was getting tired of these narrow, twisty roads. 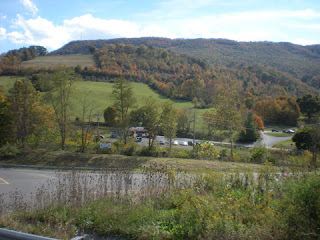 We thought we would try to make it to Charlotte, North Carolina. The truck was overdue for its first service and we figured that a big city would have the best options for finding a dealer that could work on it. So we decided on a KOA campground just south of Charlotte...which was actually in South Carolina.

We pulled in just after 7:00 p.m...which wasn’t great because that meant we had to set up in the dark. It’s sucks that it gets dark so early...oh well.

I had had a bit of a scratchy throat all day...hopefully it’s just all the dust over the past 5 days.
Posted by Dianne and Steve at 2:59 AM