We woke to beautiful clear sky this morning. It was chilly but once the sun came up over the mountain, it would soon take the chill out of the morning air. We had a leisurely breakfast and then got our riding gear on...we were going out for a ride. Sherry and Andrew only wanted to go out for a couple of hours because they were expecting their friends by early afternoon.

There are 6 trail systems that make up the Hatfield-McCoy. We are at the Rockhouse Trail System... http://www.trailsheaven.com/trailsystems/detail/RockHouse,4.aspx   The trails are all well marked and are rated easy (green), moderate (blue), hard (black) and extreme (black with red). We stuck to the green trails but even being rated easy, there were a couple of pretty good hill climbs. 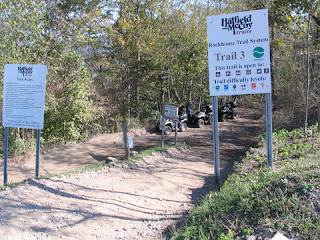 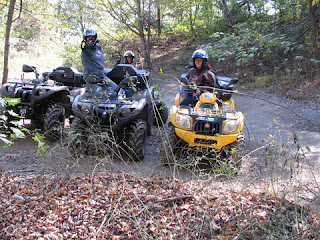 We were back at around 1:30. Chris and Lisa had arrived with their 37’ trailer along with Dave and Shelley with their tent trailer. We wouldn’t meet them until a little later because they had gone out on a ride.
What a fabulous day it was...the sun was shining and we finally got to put our shorts and sandals on again!
Chris, Lisa, Dave and Shelley (Lisa and Shelley are sisters) returned a couple of hours later and we finally got to meet them. What great people! We received a warm welcome into their group. Chris is quite a character...a cross between Burton Cummings and Fred Flintstone (thank you, Andrew, for that description). 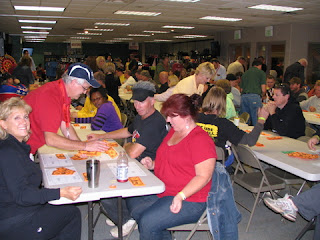 That evening we went to the “casino”...basically they give you a sheet of paper that has 4 squares on it, marked ‘Red‘, ‘Black‘, ‘Odd‘ and ‘Even‘ along with a stack of “play money”. You place a bet on the squares with the play money they gave you and then they roll the roulette and if the ball lands on Black and you have bet Black, then you win...you can bet black, red, odd or even...or any combination. If you bet both black and odd...and the roulette ball lands on a black odd number, then you win twice as much. Anyway once all the “money” has been won by all the players, then they hold an auction...you use your winnings to bid on whatever is being auctioned. I got a nice pair of riding gloves plus a bag that contained a Hatfield-McCoy tee-shirt, hat, beer cozy, keychain and sticker. 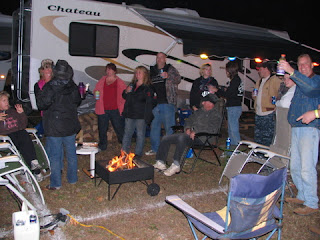 The rest of the night was pretty much a party night sitting around the campfire with people coming and going all evening. Chris had promised chicken wings but he never quite got as far as making them. Both Sherry and Shelley brought out cheese, cracker and sausage plates and I eventually made the hot cheese and chilli dip which was devoured by everyone...and that was pretty much dinner.
I headed into bed around midnight and once Steve followed a short time later, everyone seemed to disperse and either head to bed or to another campfire for more visiting

Posted by Dianne and Steve at 6:12 PM