We had a pretty laid back morning today after our full day of riding yesterday. We went up for breakfast...they had eggs this morning but had run out of bacon. I must admit that I find it interesting how much they are really into the biscuits and gravy down here. The fellows take a biscuit or two and break it all up then smother it with the chicken gravy and top it off with crumpled bacon.

Back at the trailer, I worked a bit on the travel journal while Steve sat outside with our neighbours. We didn’t see Sherry and Andrew until early afternoon...apparently they carried on after we went to bed last night...along with Chris....they weren’t feeling too spry this morning. Some of them got into the moonshine at one of the other campsites! 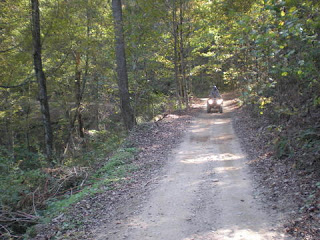 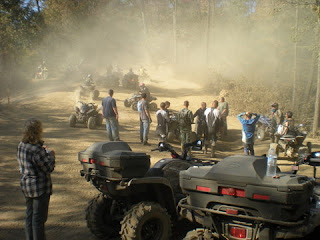 After getting cleaned up, we headed down for dinner. Tonight there were buns with pulled pork that was pretty well gone but there were lots of chicken breasts...some plain and some in a barbeque type sauce...baked beans, potato salad, pasta salad, coleslaw, green beans and corn-on-the-cob. 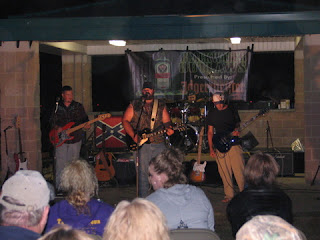 After dinner we walked around taking in all of the action...it is a very festive atmosphere. We watched the band play for awhile...The Blackwater Outlaws...then we waded through the crowds to watch the mud pit, drag races and the wheelie races. There was even a small track set up for the kids to ride...one little fellow was all decked out in blue riding gear that matched his little motorcycle and he was just having the time of his life going around and around on the track....too cute! 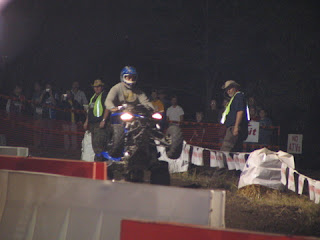 We wandered around a bit and then headed back to our camp. We joined Sherry, Andrew, Chris, Lisa, Dave and Shelley around the campfire. Soon there were 2 big plates of nachos out on the table along with jalapeño poppers and deepfried cheesestick...and Chris’ famous deepfried chicken wings!! YUM!!
The fireworks were scheduled for 11:00 p.m. but just after 10:30 the sky was lit up by a spectacular display. It must have lasted over a half hour...they really know how to put on a great fireworks display! 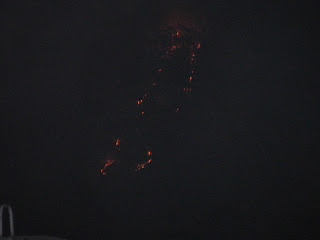 I decided to head to bed after the fireworks were over. Not long after I had gone in, Steve came in and asked me if I was ready to evacuate. Huh...what?!! I guess the fireworks had sparked a forest fire on the side of the mountain just above us. This really wasn’t all that surprising considering the hot weather they had been having and the fact that Gilbert is nestled in a valley with mountains on either side.
I turned over and went back to sleep...they’d wake me if it got really serious....
Posted by Dianne and Steve at 4:05 AM