There was a light cloud covering this morning but it was really quite mild out. We spent the morning puttering around...Steve replaced the outside kitchen fan vent (the one that had lost its flap awhile ago) and some light bulbs in the outside security lights. I cleaned up inside and then spent most of my time on the laptop paying some bills and updating our travel blog. 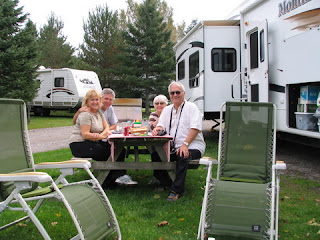 I thought I had been so smart last week by making up a bunch of hamburger patties and putting them in the freezer for future dinners. What I hadn`t really thought of was how soon we were planning on crossing the border into the USA. Of course, there are restrictions on bringing meat and fresh fruits and vegetables across the border. There was no way we would have all these burgers eaten in less than a week so we thought we would invite Donna and Garth over for lunch. It was really quite lovely out...not really sunny but very pleasant...so Steve barbequed the burgers and we sat out at the picnic table. 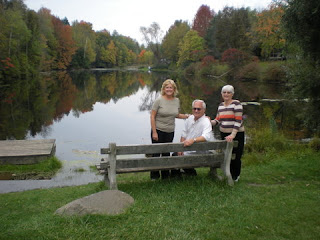 After lunch we went for a walk around the campground. It is a huge park with a section that goes down into a small valley away from the highway. There are a lot of permanent RV’s...some live in them full time while others just keep their trailer there and use it seasonally. It is a very pretty area with the leaves starting to change colour...there is even a small lake.

After our walk, we relaxed in our lawn chairs for a bit before going in to get cleaned up. We were going into Toronto for dinner and thought we would leave early and see the area on the way over to Garth and Donna`s daughter and son-in-law`s place. On the way over to Cindy and Bob`s, we stopped at an apple farm that has a cute little cafe and bakery. We sat out on the deck and had hot apple cider (Steve had coffee).

Cindy and Bob live in a heritage house in the small community of Kettleby. Cindy takes the “Go Train” into Toronto everyday to work...it takes her about an hour and a half. Their house is 200 years old and very cool...the main part of the house has been completely restored...and still has the original floors (complete with the eerie creaking upstairs)...and there has been a modern kitchen added. I wish I had taken some pictures! The four of us sat outside on the deck with a drink while Cindy and Bob finished up their work (Cindy was working from home today...and Bob works from home as a photographer).

About 5:30, we all piled into Garth’s truck and headed into Toronto. We were going to Cindy and Bob’s favourite Mexican restaurant that was right downtown on Yonge Street. It took about an hour to get there and it was great getting a tour of Toronto on the way! 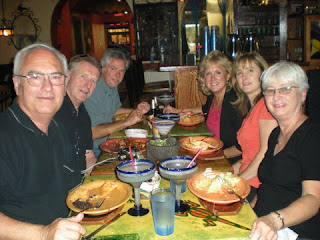 We had a wonderful Mexican dinner complete with margaritas!

On the way home, we were given a further tour of Toronto by taking a longer route down to the lakefront. We really couldn’t see Lake Ontario in the dark but it was still interesting seeing the area and having tour guides that gave us a great narrative of the areas we were going through.

It was shortly after 10:30 by the time we got home...the end to another great day!
Posted by Dianne and Steve at 4:22 AM