We woke to another gorgeous clear sunny day...it is going to be a great travel day. Before getting started with the pack up, we went for one final walk to the beach. Ahhh...just beautiful! 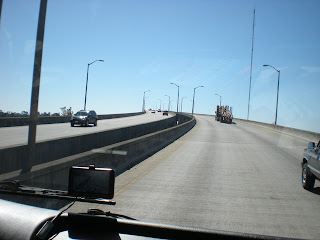 We hit the road at about 10:45 a.m., heading south on Highway 17 towards Charleston, SC. We went over some pretty incredible bridges and saw some beautiful and unique countryside. The only thing lacking in our route was a rest stop where we could stop for lunch. We ended up pulling over at an historical marker (there is a lot of history in these parts!) alongside the highway. 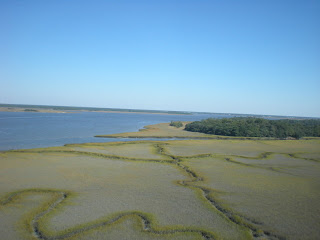 We arrived at Point South KOA at 2:30 p.m. It is a small, fully treed park...guess we won’t be using our satellite dish here either. When making our reservation yesterday, we explained our situation so when we went in to register she said that she had blocked off the whole week for us but we could pay night by night in case we received “a phone call from home”. KOA have people that escort you to your site, so we followed Ken in his golf cart to site #51, a big back-in site on the edge of the park. He directed as Steve backed up into the site. One thing we can never figure out is why they can’t make the gravel pads level...we were quite low on the passenger side, so we had to get the blocks out. 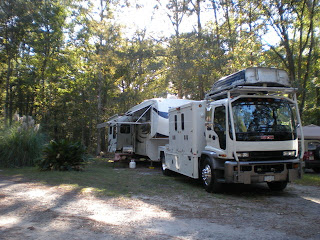 It was just after 4:00 p.m. by the time we were all set up...time to sit outside for happy hour! I brought the laptop out with me and we Skype-called my brother, Dwight. Another thing I like about the KOA’s we have stayed at...they have all had good strong WiFi signals...at no extra cost. It’s very cool sitting outside chatting with him...we were even able to show him our site.
After our call, we decided to go for a walk. We followed the path to the lake...alligators in the lake...interesting...but we didn’t see any on our short walk. 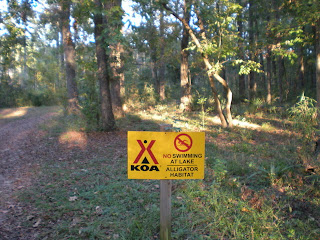 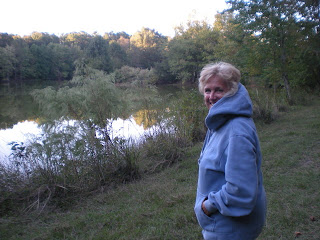 We stopped in at the office on our way back where they have The Swimming Mermaid Coffee House. During the day, they serve all sorts of “fancy” coffees and in the evening this is where the wine tasting is. They also have a pizza place serving fresh pizza and chicken wings...they even deliver to your RV. We decided to return at 7:00 (in an hour) for the wine tasting (Steve could bring his own beer) and have a pizza for dinner as well. 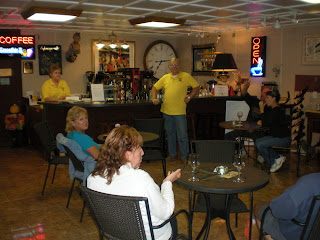 There are 4 tables and they were all full for the wine tasting. We were all politely listening to Ken (yeah...he multi-tasks...in addition to escorting guests to their sites and filling propane tanks, he also leads the wine tasting) explain the different local wines we would be tasting. It took a few minutes for the ice to break but eventually we learned one couple was from Canada...well, it ended up that out of the 4 couples there, 3 were from Canada! Jeff and Gail are from Ottawa and Ben and Carol are from Port Alberni!! What a small world! After the wine tasting (and pizza), Ben and Carol invited us all to their motorhome for a drink. 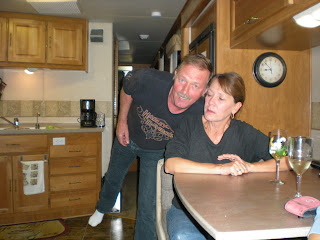 We learned that with the recession back in 1983, Ben lost his job in Port Alberni. Being young and carefree, they moved to the Turks and Caicos. He worked in construction there with Carol keeping the books. They now winter there and travel Canada and the USA in their motorhome the rest of the year. They were on their way to Fort Lauderdale where they would store their motorhome and fly over to the Turks and Caicos. 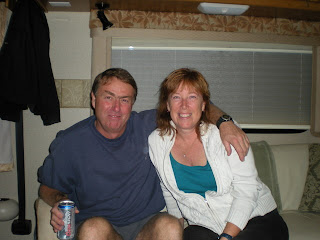 Jeff and Gail had retired a couple of years ago...Jeff had been a firefighter in Ottawa and Gail had worked in HR for Correl. Upon their retirement, they travelled around the world. They did not have an RV but were staying here in one of the KOA cabins and were enroute to a small house they had in Sarasota, Florida.

Both couples had only stopped here overnight enroute to their southern destinations. We had had an enjoyable evening and although it is unlikely that our paths would cross again, we did exchange contact information just in case.
Posted by Dianne and Steve at 5:09 PM