We were up and "at it" early this morning...I didn't even get a chance to finish my second cup of coffee. With the forecast of rain this afternoon, we wanted to get moved and set up without getting wet.  So we were on the road by 9:00.

On the way, though, we needed to empty our holding tanks and fill up with fresh water.  There was a private campground not far away on highway 78...Desert Ironwoods RV Park...that offered RV dumping.  However, after a phone call to them yesterday, I was told that their dumping fee was $20 plus another $15 for water fill...HOLY CATS!  That a little rich, don't you think??  Instead, we chose to go to the State Park campground just west of Borrego Springs and do the job...both dump and fresh water fill for $8.  Now, that's more reasonable!

It was definitely cloudy out this morning...and there was a low-lying thick "smog" hanging over the valley...probably from L.A.? 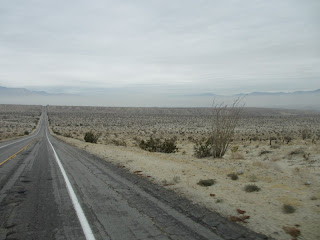 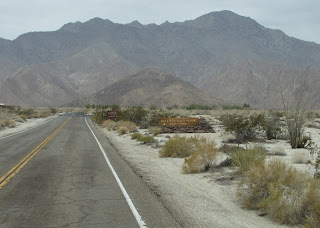 While we were at the State Park, it started sprinkling lightly...oh, come on...the rain wasn't supposed to start until later!  At least it wasn't a major downpour!  The rain seemed to have mainly fallen in the park (near the mountains) because once we left, the roads were dry.

We arrived at Rockhouse Trail Rd. just before 11:00...we had hoped there would have been fewer RVs in the area, but it was the opposite, more had moved in since we scouted out the area earlier in the week.  Although we would have preferred to be further away from the highway and closer to the mountains we needed to have good cell and MiFi service for the big day tomorrow (and of the course, the further back you go in to the wilderness, you loose the signals).

We found an easily accessible spot that, while further back, still had an acceptable signal strength...much better than at Ocotillo Wells.  So we positioned the fifth-wheel in an east-west direction for our solar panels, unhitched and began unpacking.  The first thing Steve did was bring out the California Duster to dust off the truck and trailer before the rains come. 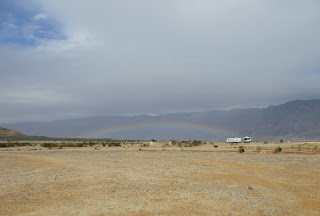 We are very pleased with the treatment that was put on when we had the rig washed in Indio.  With all of the dust at Ocotillo Wells SVRA, surprisingly very little actually "stuck".
This beautiful rainbow appeared while we were setting up.

Once we were all set up, we had a bite to eat for lunch and then headed back into Borrego Springs.  The missing part for my helmet radio had arrived at the post office, so we wanted to pick up the parcel and also find a grocery store.  We accomplished both...although, the prices for beer and wine at the grocery store are definitely not "Walmart prices". 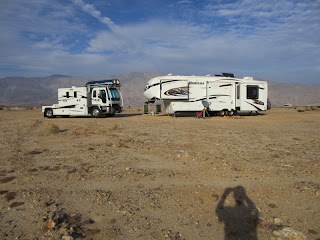 Back at the rig, Steve brought out his rake to remove some of the stones around camp...it seems this spot is no different than our last...even though we walked the area first lots of nails magically appeared.  He also took some pictures of our new spot...there was actually some blue sky and sunshine breaking through... 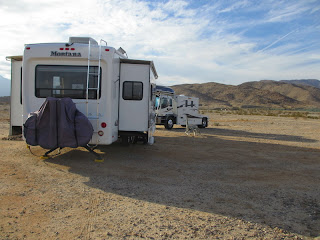 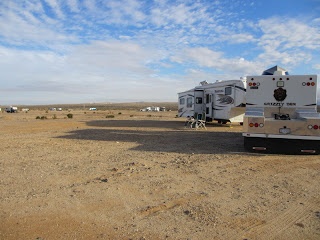 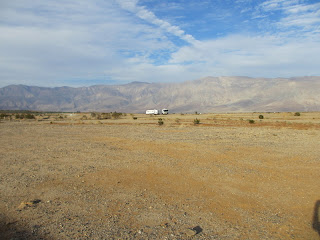 I sat inside on the laptop working on our blog for a bit, but it wasn't long before it was time to sit outside with a cocktail and enjoy the scenery...

Posted by Dianne and Steve at 8:52 AM