The sky looked pretty clear as I peered out the window first thing this morning. After yesterday’s cloud and rain, I was expecting a repeat today but so far it looked pretty promising.


After exercises and showering in our own bathroom (YAY...for full hook-ups), I made bacon and eggs for breakfast. We generally have a “big” breakfast every other day or two. It wasn’t too long before we had the door open along with all the windows. It was going to be a hot, humid day (no use straightening my hair today)!!
Over breakfast, Steve and I discussed what we should do today. Should we take our riding clothes and drive to West Delancy to check out the campground there and go for a ride; or should we just explore around here today? We decided to stay here. So after we were finished breakfast and the dishes were all done up, we put on our walking shoes and headed out. But before doing that, we closed all the windows and turned the air conditioner on! 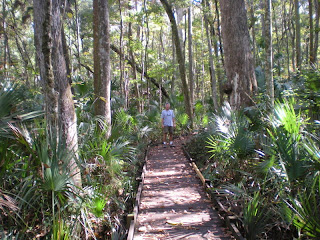 The campground map had a trail marked on it but there was no indication of how long it was... we thought we’d try it away. We found the start of “Bear Swamp Trail” and off we went. It was a nice walking trail particularly when we got to the boardwalk...very cool but being made of wood and covered with wet leaves, it was quite slippery so we had to be careful walking. At this point, we seemed to be in the heart of the swamp...a waterless swamp, mind you...but very pretty with lots of Saw Palmettos. The saw palmettos are akin to the ferns we have in the forests back home. 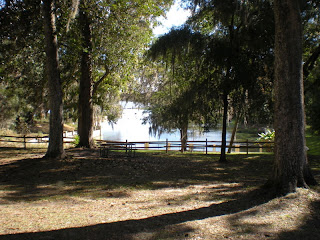 We walked and walked with no idea where the trail ended. We finally came to what we thought was another trailhead to the trail but it look awfully familiar, so I said to Steve that it looks like where we started off from. Sure enough, unknown to us, the trail was a big loop...very weird because we had no idea we were walking in a circle! Too funny! That hike took us just over 30 minutes and then we continued on through the park to the day use area where the springs are. What a very pretty area! The springs are not hot springs as we thought but cold springs, maintaining a constant temperature of 72 degrees. There were an incredible number of fish swimming and jumping in the basin...but no manatees  http://en.wikipedia.org/wiki/Manatee . 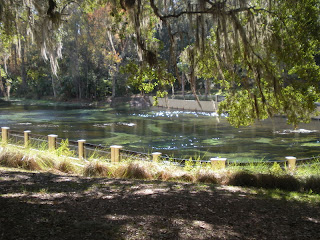 Look at all the fish in the centre of the picture... 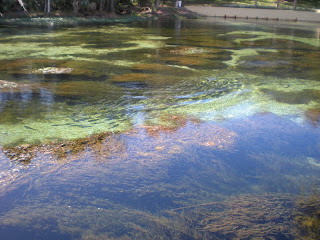 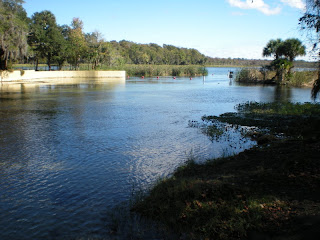 On the way back, we stopped at the park office and paid for another 5 nights...so we will be here until next Monday. It was hot and humid and by the time we got back to the trailer, an hour and a half later, we were hot and tired! Ahhh...what a relief to walk into the coolness of the trailer and relax with a bottle of water!

We relaxed for a bit and at about 1:00 we decided to drive over to ‘Salt Springs Square’ and check out the Visitor’s Centre a bit better. We had been there yesterday when we arrived in the area but hadn’t really looked around much. When we got there, there was a sign in the window stating that the Centre would be opening later today due to a meeting. So we continued to check out the rest of the shops...there was a Laundromat, a restaurant (only open for breakfast and lunch), a Real Estate office, Post Office, a hairdresser and a fishing and outfitters store called ‘Buck & Brass’. Of course, we checked out that! A very cool store that had a variety of mounted animal heads from around the world lining the walls. There was also a back room that held live bait for fishing...a bin full of crickets, for one! The lady minding the store (who was the previous owner looking after it while the new owner was on a hunting trip in Tennessee) was very nice and we had quite a conversation with her about the store. I also asked her if there was a restaurant in the area that was open for dinner. Bass Champion is a restaurant and lodge about a mile back on the highway we came in on and serves incredible food...amazing, she said, for just a “hole in the wall” place out in the middle of nowhere! Excellent...I knew I could find a place for Steve to take me out for my birthday dinner this Friday!!

Steve decided to take a chance on a haircut at the hairdressers and got scalped again. He’s not pleased with the cut but it looks good to me. It’s just shorter than he is used to. By the time he had finished getting that done, the Visitor’s Centre still wasn’t open. So we decided to drive up the highway to check out the restaurant and see if we could make reservations for Friday night. Unfortunately, the restaurant doesn’t open until 4:00 and with no cell service, I guess we are going to just have to take our chances on getting a table Friday night.

We returned to the trailer and Steve noticed that it was wet under the trailer. His first thought was that our fresh water tank was leaking as we had filled it before coming here expecting to be dry camping at Delancy West. It turned out that our water hose was spraying from a few pin holes. This is the second hose purchased from Camping World that we have had to throw away! Steve also discovered two ant colonies next to the trailer that were very active so after changing out the water hose out came the Home Defence ant poison we just purchased at our previous stay. So much for a couple of hours of reading and relaxing for Steve before going back up to “the Square” to use the pay phone. It is Steve’s Dad’s birthday today and Steve wanted to call to wish him a Happy Birthday. We were hoping to be able to get enough of a cell phone signal but it was too weak so he had to use the pay phone. I absolute HATE being in an area with no cell coverage or internet signal!!! I thought I would be able to use Wifi at the park office but apparently not...sheesh!

It was after 4:00 by the time we returned home. We sat outside reading but after a few uncomfortable minutes of getting bitten by mozzies...they attacked my butt from underneath the chair again...I left Steve who wasn’t being bitten and headed inside to take a Benadryl and lay on the couch reading.

After dinner, I resumed my spot on the couch...I had felt really exhausted today. This cold is taking a toll on me...so it wasn’t long before I was asleep.
Posted by Dianne and Steve