The day started off with nice clear blue skies but as the morning wore on, the wind came up and by 11:00 the sky has gotten quite dark with nasty looking clouds. If we are going to go for a walk, we had better get to it quickly. Rain was forecast for this afternoon...and another cold front was moving in tonight with the lows predicted to go down to -2. The rest of the week is supposed to be sunny but with highs only around 13 and night-time lows just below freezing. We’re flying home Wednesday...it’s warmer there!

By the time we were ready to head out for a walk, it had gotten pretty nasty out. But we thought we would try to walk the two loops of the campground before the rain set in. We did a major power walk and arrived back just as the rain was starting in earnest. Well, we had an excuse for sitting inside and doing nothing this afternoon.

So we sat with the fireplace on...Steve watching TV while I at the table with the laptop researching campgrounds for our return in January. We’d like to take a tour of the Kennedy Space Centre and I’d like to go to Disney World...Steve isn’t fussy about that but I figure that we should because who knows when we are going to be in Florida again. We also would like to see the couple, Roy and Sandra, that we met at Laura S. Walker State Park and they live in Port Orange. So I was looking for someplace on the east coast around Titusville but there are no State parks in that area...guess it’s going to have to be a private park. We belong to Passport American which is a club where participating campgrounds give a 50% discount. Unfortunately, what we are finding, though, is that the discount is only given on their “off season” and in Florida that appears to be roughly from April to November.

We were wondering if we were going to be able to have a campfire tonight...Steve checked at 4:00 and it was still drizzling out. At 4:30 it had pretty well stopped so we changed into our “campfire clothes” and headed outside. Just as we got the fire going well and had settled into our chairs, the rain started again...sheesh! It was hard enough for us to put our chairs away and to return the firewood to a dry spot under the trailer. Of course, it didn’t last long and we were soon back out sitting by the fire.

After dinner, we spoke to Rob via Skype. He is “baching” it right now because Angie is visiting her family in Winnipeg. She gets back on Wednesday...a few hours before we arrive, so Rob will be making two trips to the airport that evening.

Well, today was a nice relaxing day but we are gearing up for a busy one tomorrow. Lots to do as we get prepared to leave Tuesday to drop the 5th wheel and truck off at Suncoast RV....laundry, packing, cleaning...


Since I have no pictures to post today, I thought that I would add some that I neglected to post the day that we took the boat out on Salt Springs run...this is an airboat...very noisy...but it would be fun to take a ride on one............ 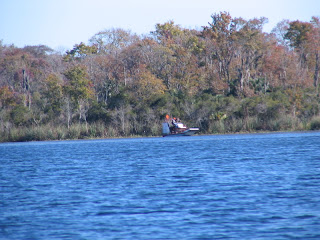 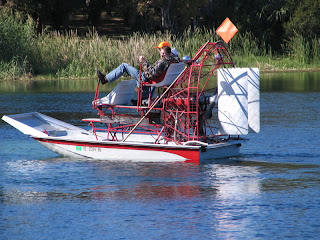