I was up before 6:00 this morning...to a very cold morning in Florida. Our outdoor thermometer said it was -1C (30F). I figured it was pretty cold out there because the furnace was on when I got up...and that’s in addition to 2 portable heaters we had running all night.

Steve was up at 7:00 a.m. and headed directly to the bathhouse for a shower. Hmmmm....I think I am going to forego a shower today. Steve called me a big wussie! Perhaps he is right but I figured I could go one day without showering...it’s just too cold to be going to have a shower in an unheated bathhouse. 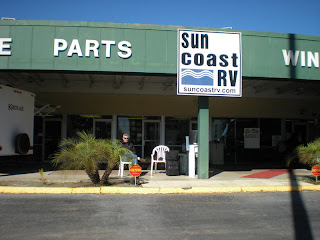 All went smoothly as we packed up and headed to Suncoast RV. After going over the list of things we wanted them to fix, we were waiting outside with our suitcases for the taxi to arrive. We sat there for almost 30 minutes until a plain unmarked car pulled up in front of us...hmmm...no exterior signs to indicate it was a taxi and no meter inside...don’t like that. But the fellow said that he was an independent driver. Well, okay. I was very happy when I started to see signs indicating that we were nearing the airport...whew...at least it looked like he was driving in the right direction.
We arrived safe and sound at the LaQuinta hotel. The driver had really been a nice fellow. Instead of a meter, he charges by miles driven...it had been a $47 cab ride. Well worth it though, I would hate to have driven ourselves...there are freeways all over the place going every which way!

After checking in, we relaxed in our hotel room for an hour or so before walking a short distance down the street to TGI Fridays for dinner. We had a great dinner...both choosing one of the 3-course specials they offered. After which, we waddled back to the hotel and spent the rest of the evening in stretchy pants in front of the TV.
Posted by Dianne and Steve