Like most mornings lately, I was up at 6:00 a.m...amazing how easy it is to get up that early when you don’t have to go to work. While I was waiting for the coffee to brew, I tried to get onto the internet again. I knew I wouldn’t have any luck, but I always keeping trying! I hate not having internet!!! We leave here on Monday and our next stop had better have a good internet connection because I have some catching up to do!! 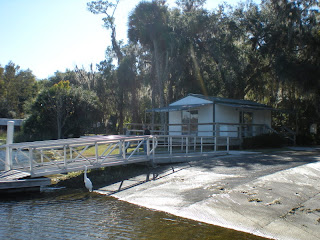 We decided to do the Salt Springs run today...no, we’re not entering a marathon! The Salt Springs run is basically a 5-mile river that runs from the Springs to Lake George and is supposed to be very scenic. I hope we see a manatee! After paying the $5 parking fee at the marina, we unloaded the boat and motor. We hadn’t had the motor out since last August when we had been in northern Manitoba. After adding the oars, life jackets, etc. into the boat, we wheeled it down into the water.
Now it was time for Steve to try starting the boat motor. After numerous tries, it finally sputtered to life giving off a big cloud of smoke. We let it run for a bit before shoving off.
Because of the cooler weather a few Manatees had moved into the area for the constant 72F spring water that’s located next to the marina. They usually just stick their nostrils out of the water so from a distance there’s not much to look at. 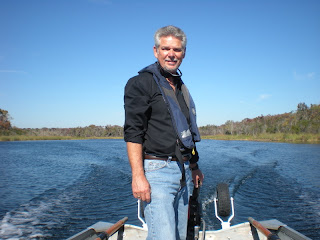 As we left the marina, the water was fairly shallow and very weedy. You must go dead slow (or as their signs say...Idle Speed) for the first mile. The run was very pretty...in its own way. Lots of different birds and it was another clear sunny day which always makes a difference. The sun was actually quite warm as we motored along...we never even thought about taking suntan lotion with us. 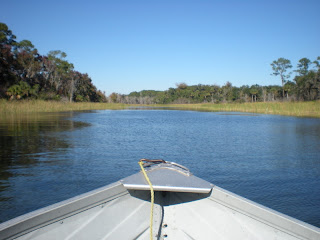 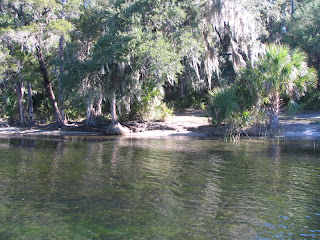 About a mile before you reach Lake George, you must go “idle speed” again and as we were passing some people camped on the shore, our boat motor stopped. Hmmm...that’s odd but Steve let it sit for a few minutes and it fired right back up again. A few more bends in the run and we arrived at Lake George. 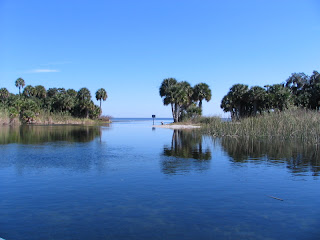 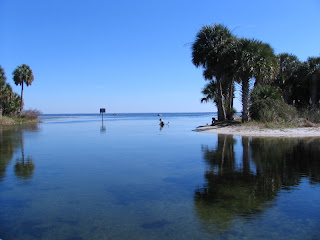 Lake George is a huge lake...the second largest in Florida. We had also been warned about how quickly it can get really rough. Apparently it is a fairly shallow lake and once the wind comes up, it gets pretty nasty. Steve wanted to give the motor a good run and also use up the gas that was in the tank so away we went zooming out onto the huge lake. He decided to head towards a point jutting out and as we neared it, we noticed it was very weedy again, so we quickly headed out further way from shore.
So...we’re bombing along in our little 12 foot aluminum boat on this huge lake, quite a ways from shore and guess what happens? The motor quits....doesn’t slow down and sputter or give any warning whatsoever...it stops so fast that it kicked forward out of the water! Because it was smoking and had a burning smell Steve thought it had totally seized, never to start again. Okay, let’s not panic...grabbing the oars, Steve started rowing us towards shore the best he could. Of course, the wind had come up, it was getting very rough and he was rowing against the wind and waves!
But after much perseverance and some major rowing, we made it closer into shore and away from the open lake. Now, we just had a couple of miles of rowing to make it back to mouth of the run. It was marked by boats fishing there. Oh, why are there never any boats close by when you need them?! All I could think of was how glad I was that it wasn’t late afternoon...at least we weren’t battling daylight too! 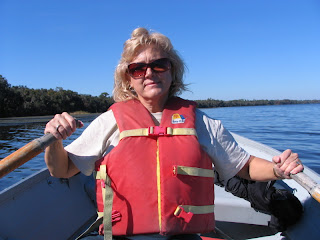 I relieved Steve after 20 minutes rowing. After a while, he thought that he would try starting the motor. We both didn’t think he’d have much luck but thankfully, it did sputter to life....YES! Unfortunately, it wasn’t pumping water to cool the engine down. Steve thinks it got plugged with all the weeds that we went through and overheated. Giving it a bit more of a break, he tried it again. It was pumping now and we sped away trying to get as close to the mouth of the run as we could before it stopped pumping again....and it did stop. So we limped along, with some rowing between periods of the motor running properly. I was very relieved to finally make it back to the run. At least once there, if we had no motor at all, there were plenty of boaters in the area fishing. 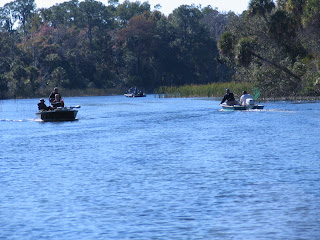 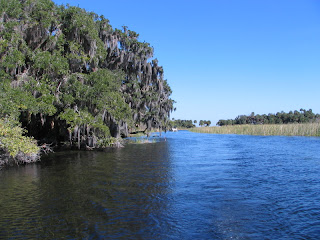 I tell you, that 5 mile run back up to the Springs seemed to take forever! But we finally made it back to the marina....whew! That was an adventure that I would not like to experience again! And we didn’t even see any manatees.
So, we now have a boat motor that will need some servicing as well as a quad...great! Oh well...it is what it is! 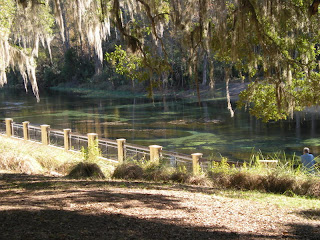 After loading the boat, motor and everything back into the truck, we headed home. But before actually going to the campground part of the park, we went to the Springs just to see if by chance a manatee or two had come in. There were some people swimming...it was a nice warm afternoon, after all (we learned later that it was 70 degrees and that was in the shade). So no manatees were present.
It was just before 3:00 when we arrived back at the trailer. We changed into some lighter clothing, found a spot of sunshine coming through the trees and sat in our chairs relaxing...ahhhhh...that had been just too stressful a day! 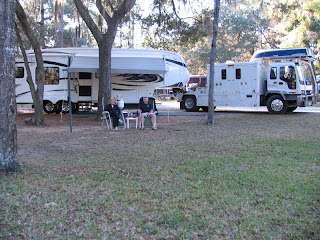 We decided to go for a walk before happy hour today so we put on our walking shoes and walked the whole campground...not just the perimeter but back and forth on all the roads too. There....now we will sit down with our bevies and enjoy what is left of a warm afternoon. After being entertained by a couple of squirrels and then chatting with a neighbour for a bit, we decided to head inside.
We had dinner and then settled in front of the fireplace watching TV...well, Steve did more watching than me...I made the mistake of lying down on the couch....say no more....
Posted by Dianne and Steve