I actually had a much better sleep than I was expecting! I was up at 7:00 and after turning the coffee on, I headed immediately over for a shower. We wanted to get going as early as possible this morning so there would be no time for my usual relaxing cup of coffee this morning.


By the time we had gotten all packed up and made a stop at the sani-dump, it was 9:45 by the time we hit the road. Rather than taking an Interstate highway, we would be on highway 301 heading south towards Ocala, Florida. For the most part, it was a four lane divided highway. Unfortunately, not being on the Interstate, there was no Visitor’s Centre to stop at as we entered Florida nor were there any rest stops to stop and have our lunch. We managed to pull into a Shell Station in the small town of Lawtey where Steve filled up the gas containers to ensure we had enough gas for the quads once we got to Salt Springs. There was also a large lot adjacent to the station where we were able to park the rig and have our lunch as well.
We even saw our first cotton field along the way.... 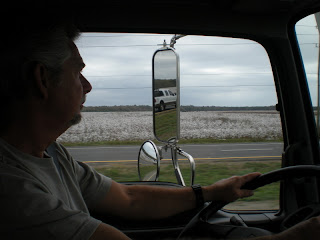 As we neared Ocala in central Florida, the countryside turned into rolling ranch land. The area is known for large horse ranches. Very beautiful.

It was shortly after 2:00 when we pulled into a small shopping area parking lot in the community of Salt Springs...where the Visitor’s Centre was. After researching the area on the internet, we had decided to go to a small rustic campground call Delancy West. It was the only campground in the area where you are allowed to access the Ocala ATV trails directly from your site. All others do not allow ATV riding in the campground...you must unload at the trailhead. However, after asking the fellow at the Visitor’s Centre about the campground, it sounded much too rough a road to get our rig into. Rather than chance it, we decided to stay at the Salt Springs campground which was right across the street. We’d stay at least a night there and see how the road was before pulling the 5th wheel in. 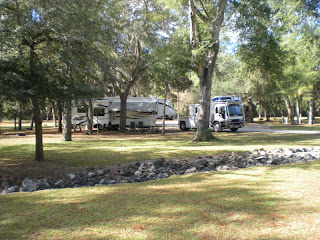 Salt Springs campground turned out to be really nice. It has full hook-ups, including sewer and 50 amp service for $26/night. We were allowed to go ahead and pick the site we wanted and then go back and let her know which one we had chosen. We decided on site 81 which is beside a stream...okay...well, it’s a stream when it has been raining...thus not having another camper right beside us. It took a little manoeuvring to back the 5th wheel into the site so that it was positioned between the power post and a big tree to enable us to get both the slides out and the awning down. But we managed it just fine.
It was very humid out...and cloudy. We ran into a bit of rain along the way and as we set up camp, it drizzled on and off...but it was very warm out!! After getting all set up, I walked back up to the office to let her know which site we had chosen and pay for 2 nights. It is likely we will stay longer but we wanted to keep our options open and take a look at the other campground tomorrow to see if we would move to it.

When I got back, we sat outside with a cold beer before deciding to set up the satellite dish and see if we could find a signal. I had found the coordinates on a website called “DishFinder” and Steve set out to see if he could find a spot through the trees. After getting it all set up, I sat inside reading out the signal strength to Steve (via our two-way radios) while he moved the dish. To our surprise, he really didn’t have too much trouble find a satellite and a fairly strong signal...YAY!! We really think that the reason we had such a hard time in Waycross was because ShawDirect had turned off our signal. But we were up and running now...all was good!

After securing the tripod down, Steve went over to talk to a camper across the way. We had noticed he had an ATV with him and Steve wanted to talk to him about the trails. While he was gone, I tried and tried to get an internet connection on the laptop but had no success. Occasionally, I’d get a weak signal, but it was too weak to actually connect to the internet....BOO, HISS! Oh well, I believe there is Wifi up at the office...for a price. Guess I will just have to use it while we are here.

Once Steve returned, we decided to sit outside under the awning (out of the rain) and toast our new destination...we are now in Florida!! Wow, I really have a hard time believing it sometimes! What a blast!
Posted by Dianne and Steve