It was cloudy out for a change when we got up this morning. But it eventually cleared up and we had another sunny afternoon...and it was warmer than it has been. Still not shorts and sandals weather but warmer.

We were up and out at a relatively decent hour this morning. Steve had located a company that would service the boat motor so that was where we were heading first thing. We located the address in Longwood (another suburb of Orlando) without any problems...thanks, Serena. Mark at Boatwrench would call us when they found out what the problem was.

Our next stop was the Altamonte Mall...yes, to the mall again! When Steve bought his shoes yesterday, he chose to wear them so the clerk put his old shoes in the box. Well, he had tried on two different sizes so there had been two boxes out and she put the box with the other size in the bag instead of the box with Steve’s old shoes in it. Yes, Steve basically had two pairs of new shoes when he got home but being the honest fellow he is, he decided to take them back....well actually...he wanted his old shoes back to wear as “grubby” shoes. The sales clerk knew exactly who we were when we walked into the store and I think she was very relieved thanking Steve for his honesty in returning them.

We decided to check out Suncoast RV where we are dropping the 5th wheel off for the warranty work next week. When Steve had made the arrangements early last month, they had said we could leave the 5th wheel and truck there for 3 weeks while we were home for Christmas. But the fellow Steve had been talking with seemed rather nonchalant in his response so we wanted to just confirm all the arrangements. Yes, they had it noted that we would be leaving the rig there until January 6th. Good, that made us feel better...I’d hate to have arrived there Tuesday and have them know nothing about us wanting to leave both the 5th wheel and the truck there for 3 weeks.

While we were at the RV place, we decided to go take a look at some of the Montana 5th wheels they had on their lot. Although they did not have the same model as ours, we determined that we got a very good deal when we purchased ours.

Our final stop was Cycle Sports Center to pick up my ATV...but as we were getting back into the truck, I said to Steve that I could really go for soup, salad and bread sticks at The Olive Garden. Steve had also been thinking that a visit to The Olive Garden would be a good idea...but we hadn’t seen any in the area at all. So I checked with Serena and sure enough there is an Olive Garden only 5 miles from where we were and it was also on the way to Cycle Sports. Perfect!

I love The Olive Garden restaurant. The decor is really nice, the servers very attentive and the food is excellent! Mind you, I really haven’t been very often...just a couple of times for lunch and I have always had their all you can eat soup, salad and breadsticks (pretty reasonable at $6.95). We did go to one in Winnipeg for dinner with Angie’s parents and as I recall, the food had been excellent. Anyway, I pigged out on the warm, fresh breadsticks...they are to die for!...leaving little room for the soup and salad. Steve had soup and seafood fettuccine. We were both absolutely stuffed when we left.

We made our way to Cycle Sports Center and picked up my quad. Apparently they could find nothing wrong with it other than on our last service they over filled the rear differential. The vent tube leaking the fluid runs from the differential all the way to the front of the quad. We found that very strange because we have done over 600 km of riding since we had them serviced in Kelowna back in July with no leaking. They also found that the air filter had been over oiled and the air box was full of oil. Steve had the differential overfill thing happen to him once before with our first quad on one of his moose hunting trips. The thing is you can’t see the vent tube....you just know you have a leak. You would think that a professional tech would be able to do something as non technical as a fluid fill to its proper level!

While we were at Cycle Sports, Mark from Boatwrench called. It turns out that the motor does need about $295 worth of work done on it...Well, it is what it is.  It should be ready to be picked up tomorrow.


After loading my ATV into the truck and securing it down, we headed home. Steve puttered around outside for a bit and then chopped wood for a fire while I was inside trying to do some banking. I was finding it a little frustrating...the internet connection was very inconsistent. It would be fairly strong and download quickly and then the next moment it was very slow to non-existent. 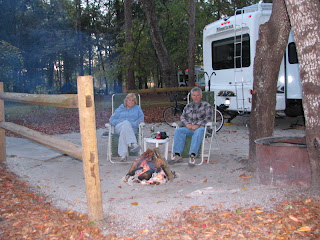 After about an hour, I was very frustrated and decided to close it all down. Steve had a fire going...it was time to go out and relax with a glass of wine by the campfire.
After such a huge lunch, we decided to just roast hot dogs over the fire for dinner...yum! So we sat chatting about our plans once we returned in January. I’m going to look into taking a tour of Cape Canaveral...that would be very cool. Of course, it would even be cooler to actually watch a space launch! 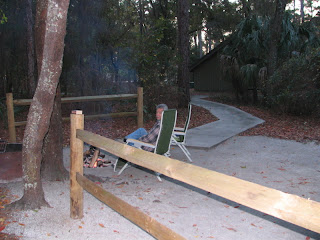 Eventually, we retreated inside to watch TV...CSI was on tonight! In other words, we had our usual evening inside in front of the fireplace watching TV.
Posted by Dianne and Steve