Despite the long day travelling yesterday and finally getting to bed just after 1:30 a.m., both Steve and I had a heck of a time getting to sleep. But we finally did manage to get a few hours of sleep, waking up at 8:00 a.m. All we had done last night was to let the bedroom slide out, clear off the bed and crawl in. Today we were anxious to move out of the storage area and get set up in site #26. We also had the rental car for the day so wanted to take advantage of having it by going to have one final look at Beaufort.
But first of all we needed coffee, so we walked over to the office and were greeted by Kay and her husband, J.D. They are full timers staying here and working part time at the KOA campground. From North Carolina, they both have strong southern drawls when they speak...particularly J.D....he is really hard to understand! Steve thinks he is too lazy to form a proper sentence. After coffee and bagels, we headed back to the trailer, closed the one slider and set off over to the site where we would spend the next 2 nights. It’s not as nice as the previous site (#51) that we had but it would work. Mind you, we did have some fun positioning the trailer far enough away from a tree so that we could get our living room slider out.
It was just before 11:30 by the time we were all set up and ready to head into Beaufort. We were going to stop in Port Royal for lunch at the Dockside Restaurant...it had been highly recommended to us and a feast of fresh shrimp sounded awesome. But first we were going to drop the truck off at the Walmart parking lot—that way we could use the rental car all afternoon and have transportation back to the KOA after we dropped the car off. We arrived at the restaurant just before noon. The parking lot was packed...wow, this is a popular spot! As it turned out, there was a private function on today and the restaurant doesn’t open until 4:30 p.m. for dinner....drats!
Well okay, then...I guess we will just drive into Beaufort and see if we can find a waterfront restaurant there to have a nice lunch. It was just an absolutely beautiful sunny day! Not too hot...mid 70’s. Ahhh...it's so nice to be back in shorts and sandals! 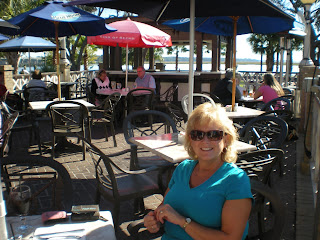 We decided on Panini’s Cafe that had a patio overlooking the park and water. We had a lovely lunch and then walked the full length of the waterfront park and both sides of the main downtown street. Lots of little shops and a small museum...I didn’t see inside many of the shops but we did go inside the museum! It was actually very interesting...so much history there. 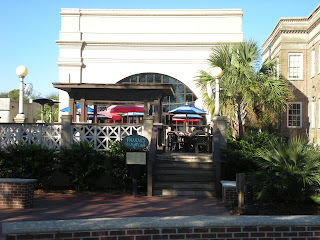 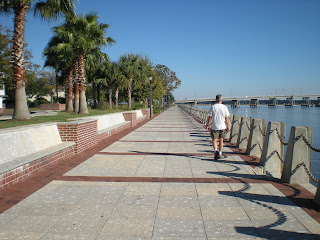 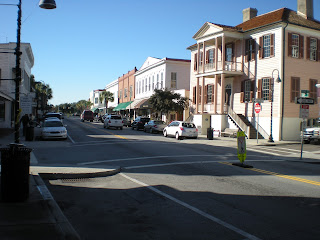 We were 4 minutes late getting back to the car and found a parking ticket on it!! We couldn’t believe it! So we immediately went over to the office...Steve was going to give them a piece of his mind! Well, he was back out in 2 minutes...no problem, sir; you don’t have to pay it.

We went for a drive following much of the same route that the horse and carriage tour had taken us...sticking to the waterfront streets but seeing more of the old stately homes. We stopped at a boat launch area for a look and some pictures.... 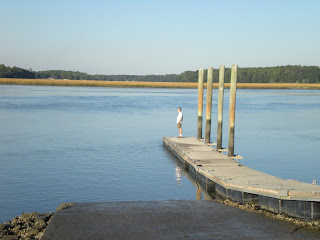 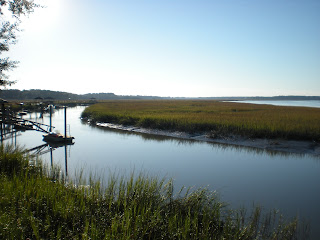 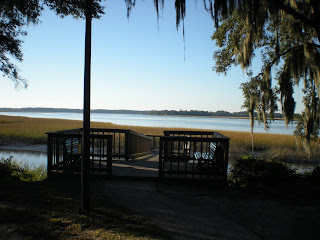 It was getting late and we still had to pick up some groceries, so we went back to Walmart and picked up some essentials. After packing them into the truck, Steve followed me to the Shell station we had passed earlier. It appeared to have the cheapest diesel at $2.96/gallon...so we thought we would fuel up there. I gassed up the car while Steve took care of the truck.

After dropping the car off, we continued back home. It was just before 6:00 p.m. and it was dark already! I hate that it gets dark so early, mind you, it is nice having it lighter in the morning.
Posted by Dianne and Steve at 3:15 PM