We had planned to be on the road by 11:00 a.m. this morning but that didn’t quite work. After our morning routine, breakfast, packing the 5th wheel up and stopping at the sani-dump on our way out, it was just after 11:30 by the time we were on the road.

It was another beautiful sunny day as we headed south down I95. We took exit 9 onto Georgia State Highway 82 going west towards the town of Waycross. Laura S. Walker State Park is 2 miles off the highway and 9 miles out of Waycross. We’ll have to check out Waycross another day...it’s got to be fairly large—they have a Super Walmart Center, after all. 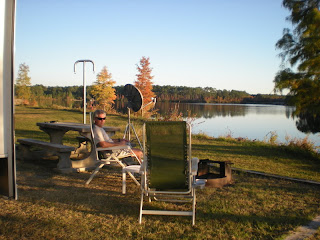 We pulled into the park at about 1:45 and after registering ($26/night with electricity, water hook-ups and free showers) we were free to go in and pick our site. Well, that didn’t take long! Site #8 was lakefront...that’s the one for us! The park is really nice...quite different from Fort McAllister. It is much more open here with large grassy areas between the sites.
After getting backed in, levelled off and the sliders out, I decided to play “Susie Homemaker” and give the trailer a good vacuuming before I put out all the furniture. While I was doing that, Steve was outside setting up all the outside stuff involved in setting up. I had the vacuuming done and the inside pretty well all set up when it was time to get the satellite dish out. We had wide open skies, so there should be no reason not to be able to get a signal...we just had to find the right satellite. Well, that proved to be very frustrating...there was no way we could find a signal stronger than 18. Something must be wrong. So rather than continue with the frustration, we decided to leave it until tomorrow when Steve could call Shaw Direct and see if they could help us.

The sun was going down and it was getting cool so after changing into warmer clothes, we got a campfire going and sat outside enjoying our beautiful view of the lake. It so lovely just sitting there that instead of having the planned spaghetti for dinner, we decided to just roast hot dogs over the campfire.

It was after 9:00 when we finally decided to go in. I actually seem to have a stronger internet connection here...must be the wide open sky...so we did a little research of the Ocala National Forest in Florida. This is where we are planning to go to next. The only issue we are having is that next Thursday is the American Thanksgiving and it seems that the campgrounds get very busy over that weekend. We are scheduled to leave here next Wednesday but we don’t have anything reserved so that may be a bit of a problem...we’ll have to deal with that one over the next few days.
Posted by Dianne and Steve at 5:53 PM