Well, the first thing I found out this morning as I fired up my laptop and got onto the internet is that it is snowing back home! It looks like they are going through a bit of a cold snap and there is a snowfall warning...10 to 15 cms of snow expected in both the Vancouver and Victoria areas. Sorry guys...but we’re in our shorts and sandals down here in southern Georgia, enjoying lots of sunshine and temps in the mid 70’s (mid 20’s for those back in Canada).

After breakfast, Steve called the Okefenokee Swamp Park to book a 2 hour boat tour of the swamp for today. Unfortunately, he was told that the boat tours had to be cancelled due to lack of water...drats! But there was still the train tour available.

But before heading out, we had one more thing to take care of...we did a Google search for local satellite dealers in the area that may be able to come out and troubleshoot our problem. Steve researched a couple of options and then called one...”What’s yor problem, honey?...” (said with the most perfect southern drawl...). After explaining the situation, she was most helpful and will have a technician out as soon as possible Monday. Let’s keep our fingers crossed that there is a fairly inexpensive solution! 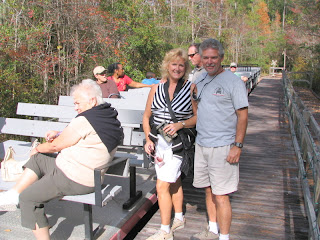 Okefenokee Swamp Park http://www.okeswamp.com/ is only about 8 miles away and we arrived there just before 11:00 a.m. ...just in time for the scheduled 11:00 train tour. We enjoyed the tour but unfortunately we could not hear a lot of what the tour guide/train driver was saying. The combination of a rather inadequate speaker system, the noise from the engine along with his southern accent made it a real challenge. There was also the diesel exhaust from the engine in front of us which was rather unpleasant as well. But he did stop the train a couple of times and when you could hear what he was saying; he was really knowledgeable and very interesting. He had been working in the swamp since 1971 and we really learned a lot about alligators.  He even had a name for all of them...how the heck do you distinguish one from the other??! He then listed off all the different characteristics of each of them! A very interesting fellow!

This is Lucy...she is very sick.  They have tried to separate her from the others and nurse her back to health but she is not doing well... 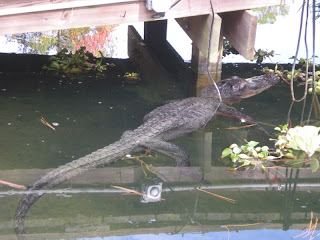 We saw lots of alligators! 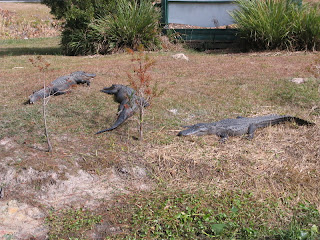 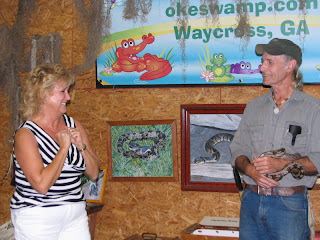 After the train ride, there was a show in the Interpretive Center, so we headed down there. Another very interesting fellow shared his knowledge of the swamp...he had 2 types of snakes and 2 baby alligators...one was 2 years old and the other 3. He brought out each one individually telling us all about it...and then walking through the audience letting everyone have a close-up look and feel. No thanks...I’ll pass on that! I’ll just admire from a distance...but of course, this only made me his target...great! At one point, he had me up front and wanted me to put my hands out in front of me...and of course, he was going to put the snake in them....just couldn’t do it...I touched it and then basically scurried back to my chair! 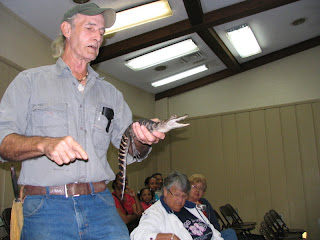 Then he brought out the baby alligators...awww...they are “so cute”! As with the snakes, he brought it into the audience and just as he came over to Steve, the alligator peed. Boy, did Steve jump...good reflexes, honey!! The fellow said...it’s okay...it’s just Gatorade! Too funny! 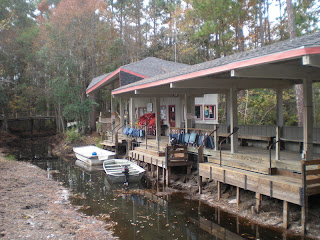 I’m glad that we went to the park and were able to see what we saw...mainly lots of alligators...but we were both very disappointed that we were unable to go on the boat tour deep into the swamp. It’s very obvious why the boats aren’t running...the water level is so low in the canals that the distance between the platform (dock) and the boat is incredible! They desperately need rain.
After a good 2 ½ hours at the Okefenokee Swamp Park, it was time to go into Waycross and find the Walmart Supercenter and pick up a few groceries. That was not a problem and we were in and out of there and on our way back home in no time...okay...a little time...
We were back home by 3:30. Steve decided to unload the boat while I put the groceries away. We are going to take the boat out for a ride around the lake tomorrow...no fishing...just sightseeing. I did a little banking and then it was time to sit out and enjoy the late afternoon sun before it slid away behind the trees on the other side of the lake. While we were sitting there, the camp hosts came by inviting everyone in the campground to the Chilli Cookoff. For $2 each we could come and try the different pots of chilli made by the entrants to the cook-off. It was from 6:00 to 7:30 over at the interpretive center hall. That sounded good to us and after chatting with our neighbours Toddie and Vic, they were going to join us as well.
So, armed with our flashlights, the four of us set out at 6:00 for the chilli cook-off...aka dinner! There was a nice gathering of people who had decided to partake in the event. And the 4 big pots of chilli were soon devoured! They were all delicious...I chose to mix the super-spicy with a mild one...just the right combination! 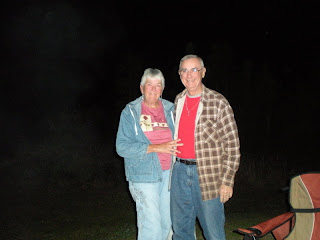 After some good conversation and great chilli, we headed back to our campsites. We changed into our “campfire” clothes and joined Toddie and Vic by their fire for about an hour and then retreated inside to watch a PVR’d show before heading to bed.  This is a picture of Toddie and Vic...
While Steve was getting ready for bed, I decided to go on-line and check our email...then I decided to return a couple. Needless to say, that took longer than I anticipated and Steve was snoring peacefully by the time I made it to bed. It’s not very often that he is asleep before me...
Posted by Dianne and Steve at 4:12 AM