We had our usual start to the day. After breakfast we sat outside enjoying the sunshine as we waited for a phone call from the company that was going to come out and take a look at our satellite dish. At about 10:00, Steve decided to give them a call...they were “working on it” and should have a technician out later this afternoon. 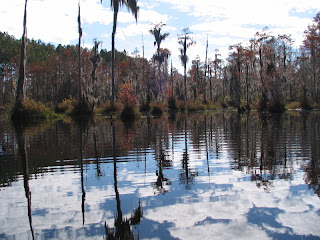 Well, okay then...let’s go out for a ride in the boat and see if we can find more alligators. We had the other end of the lake to explore so we headed out in that direction. It was such a beautiful day as we skimmed quietly along the water towards the bridge. We went under the bridge and the other side was very cool...”Welcome to Baba’s Swamp Tour”...Steve announced. But unfortunately, no alligators...no critters at all, for that matter...just very interesting scenery.

That's the campground in the background behind Steve...﻿ 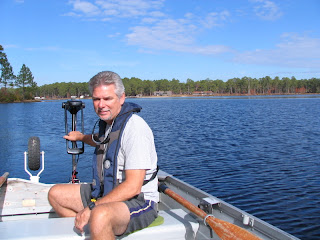 On the way back, I saw two little turtle heads peering out above the water but they quickly disappeared. That was it for our wildlife sightings.

After lunch, we waited and waited for a phone call...they said that they would call once they knew when a technician would be available. So finally Steve called again...the technician was on his way. Well, sheesh, it would have been nice if you had called to let us know.

While we continued to wait, we did have a little entertainment...Steve spotted an alligator floating in the lake right in front of our campsite! 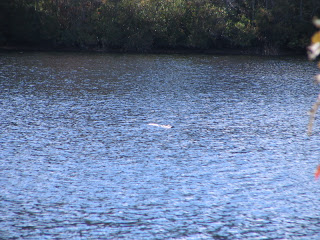 Lee (“the satellite guy”) arrived just after 2:30. The good news is that there is nothing wrong with the LNB arm on the dish...but it did take him about 45 minutes to find a satellite signal...and he had very expensive equipment to assist him. Great...what does that mean next time we try finding a signal by ourselves...it could be pretty expensive getting a technician out to help us find the satellite every time we put it up! (In Canada we never had a problem aiming the dish before and this was our first attempt in the USA) However, once inside they were still unable to get any stations. Lee went over all the setting and double checked everything he could...but still no stations. So, that meant a phone call to ShawDirect...and another exercise in frustration as you wait on hold forever! As it turned out, if you don’t use your dish for over a week, it automatically blocks and you have to phone ShawDirect to have it unblocked. Well, no one told us that! It is supposedly some kind of security feature. Wouldn’t it be nice if they automatically deducted the time it is blocked from your monthly bill?

It was after 5:30 by the time Lee left. He had been here for 3 hours and only charged us $75 for the service call. He said it had been a learning experience for him as well working on a Canadian system and that was why he only charged for the service call. Wow...thank you very much! I saw dollar signs in front of my eyes as the hours ticked by and had not been looking forward to the bill.

Needless to say, we stayed inside tonight...we had satellite TV and could now get CHEK and BCTV news! As a matter of fact, I turned on CHEK news just in time to hear all about the snow storm that was happening in Victoria. The southern west coast is sure getting hit hard with a cold snap right now.
Posted by Dianne and Steve at 12:01 PM