Well, we thought we had all the bugs worked out of our 5th wheel...but today we found more...hundreds more, as a matter of fact! We have been invaded with little teeny tiny ants. Just lovely...(said VERY sarcastically!) There are warnings posted about an ant problem here and Steve had been monitoring around the outside of the trailer but hadn’t noticed any...yet. I guess they decided to make their invasion during the night while they had the cover of darkness! I was not impressed, to say the least!!

After spending the morning vacuuming up ants (Steve sprayed the inside of the hose with Raid to kill them) and spraying all around the outside of the trailer, we ran out of Raid. So we made a trip into Waycross to pick some more up at Walmart.

We were trying to avoid having to spray the inside of the trailer but upon returning from Walmart, we found that many more were enjoying their new found home. So we closed up all the windows and Steve sprayed all around the corners of the trailer and closed it up while we went for a walk.

We walked the nature trail again. I had my pedometer with me and was trying to calibrate it. To do that, I needed to know the distance between two points and since the trail is 1.3 miles (2.08 km), I can use that. After going around the loop once, I found that my pedometer was still out quite a bit so after adjusting the stride on it, I decided to do another loop and test it. Besides, I needed the exercise. Steve didn’t want to, so he went back to the trailer. Whew, it was hot! But I had a good 45 minute power walk and it felt great! I still don’t think I have my pedometer quite right yet, but I wasn’t about to do another loop! I’ll test it again on another walk later in the week.

Well, the trailer had been closed up for 2 hours...hopefully, that did the trick! We opened it up to air it out while we sat outside enjoying the late afternoon sun with a beverage. We are still finding the occasional straggler but nothing like the infestation we had this morning.

After dinner, Steve lit the campfire. Our neighbours...in a big Class A motorhome two sites down from us...are coming down to join us for a visit. Roy and Sandy are from Daytona, Florida and have enjoyed RV’ing since 2003. They are not full-timers but do enjoy extended trips each year. He retired when he was 47 (he’s 61 now)...wow! He then went on to explain how he was able to retire at such an early age. In 1973, right out of the service, he was offered a job by a friend who was developing a computerized billing system for a local health care company. In a nutshell, it was right at the start of the “computer-age” and with a lot of hard work and long hours; the company grew and was eventually in 42 States. The company was eventually purchased by another larger one and the deal made was that all current employees would not lose their jobs. Only the executives (i.e. founders) of the company...he was a Vice-President would go. Consequently, he retired...but he carried on as a consultant  for a bit afterwards.

It was close to 10:00 when they left and we put out the fire and went inside. We had had a great evening sitting around the campfire chatting with new friends!

I thought I would end today's posting with some pictures of the campground that we took while out on one of our walks.  This is a picture of the day-use area... 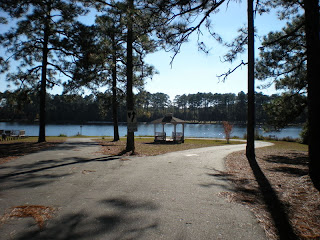 That's our truck way in the background... 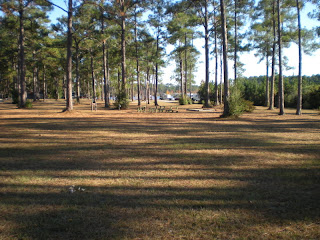