There was lots of dew and a little fog out there when we opened the blinds this morning, but not nearly as thick as it had been yesterday. It didn't take long to burn off and we had a nice sunny day...until late afternoon when a high cloud covering rolled in. Another rainstorm is forecast to roll in Friday...tomorrow is supposed to be cloudy with a high of 70F. It would be nice to have sunshine for the RV-Dreams mini reunion but as long as it doesn't rain....

It was going on noon by the time I had showered...but I had actually accomplished a lot before then. After our resistance exercises, I managed to get out for a 40 minute powerwalk (something I haven't been doing enough of lately!), then I had breakfast, colored my hair and made banana muffins! While I was doing my thing, Steve was outside cleaning the barbecue.

We had a phone call from Larry, a fellow who fixes day/night shades (we had picked up his business card while at Gamblers getting the grommets for our stovetop)...he is going to be in La Posa South this afternoon and would have time to come by and take a look at our broken back window blind. My brother, Dennis, had tried to convince us that we could easily re-string them ourselves but after having trouble finding the cord locally...and wanting to get it done asap, we decided to just go ahead and have Larry do it for us. 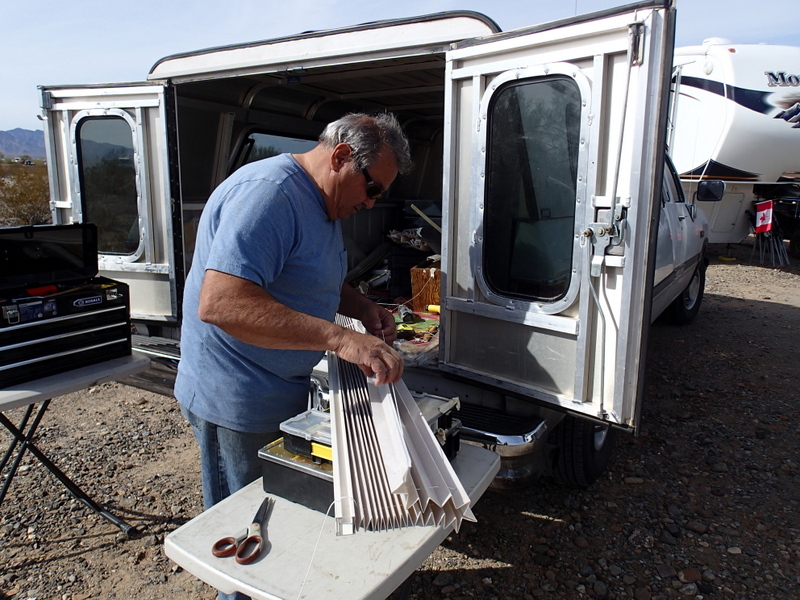 He arrived around 2:00 and after giving us an estimate of $60.00 on our 6' blind, got to work. Steve helped him take the valance down so the blinds could be removed. He set up a table outside the back of his truck and got to work. He re-strings blinds a different (better?) way and also replaced the bushings that were apparently installed backwards. Larry is an awfully nice fellow that appears to really know blinds. Although fairly chatty (good thing he doesn't charge by the hour, LOL!), he explained what and how he was doing it differently than the factory install as Steve watched. He also replaced a couple of plastic pieces the string ties to that were pulling out of the wall so that he could adjust another blind that was left too tight after being restrung previously. That was another $15.00.

It was going on 4:00 by the time he left...I don't say "finished" because he stayed chatting for quite awhile. He spends his summers up in New York State in an RV park on Lake Ontario (looking across to the Toronto area) and winters down here. If you are ever in the Quartzsite area and need day/night shades repaired, let me know...I have his business card.

After he left, we relaxed outside with a drink for a bit...but with the cloud covering and the breeze, it had really cooled down. So inside, we went!

We spent another evening in front of the TV watching our favorite shows until it was time to go to bed. We're looking forward to our little RV-Dreams gathering tomorrow afternoon...too bad the forecast isn't for sunshine! Oh well...it will be good seeing everyone again!