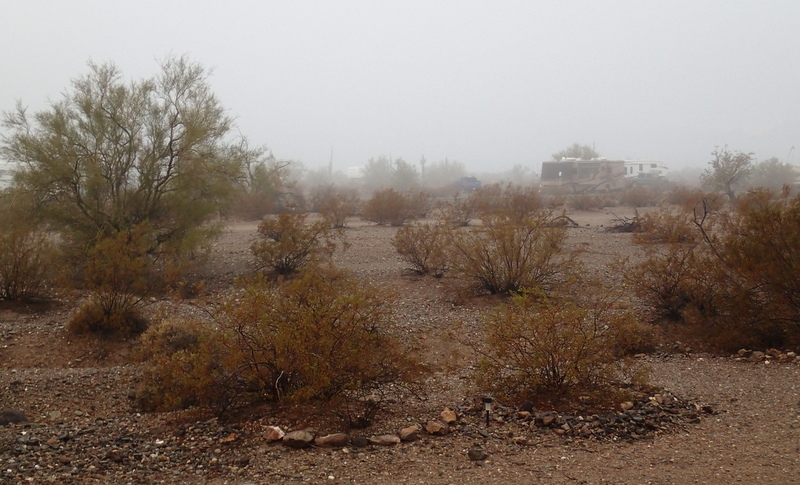 We opened the window blinds this morning to find the area blanketed with a thick layer of fog... 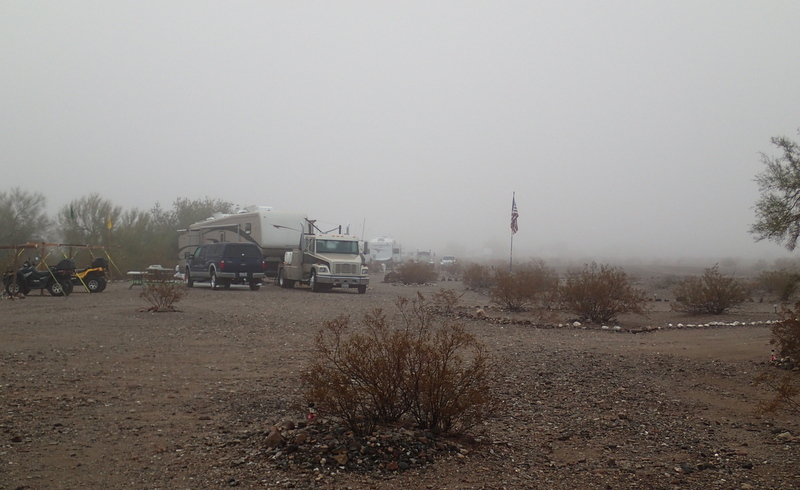 The fog actually got thicker a little later but the pictures Steve took ended up being deleted... I formatted the camera thinking that all of the pictures had been downloaded...oops!

We had a work morning today...Steve spent a couple of hours emptying the holding tanks and then filling the fresh water tank. The line up at the sani-dump was long (17 rigs) so he had to ride all of the way down to the 'blue-boy' dump near the entrance.

While he was doing that, I cleaned up inside, did a little banking (recorded expenses and paid a couple of bills) and then cleaned our two leather recliners...something I had been meaning to do for some time! I wiped them down with a clean damp cloth and then used a leather conditioner on them. They look great!

Just after 12 noon, we headed into town to run a few errands. There were a couple of parcels waiting for pickup at Quiet Times. Steve ordered a new gas pump and a replacement monitor for our 507 tire pressure monitoring system we bought in 2012. Last year when we were here our original monitor battery wasn't holding a charge so Steve inquired about battery replacement with one of the TST vendors. They gave him a reconditioned replacement even though ours was out of warranty. Last November that monitor started dropping out sensors so Steve called TST. Surprisingly they sent us a free new replacement! We then needed to pick up a few things for the RV-Dreams mini reunion we're having Thursday. Steve also filled the drinking water containers.

Back home, we had a quick bite to eat for lunch and then Steve called his Dad back in Victoria. When Dennis and Suzanne were here, they suggested we try "Magic Jack", so I installed the app on my android phone. We tried it out by calling Chris and then Steve used it today to call his Dad...it works great...way better than our TracFone!

After the phone call, Steve headed outside to "fix" the feet on our anti-gravity chairs. The ends have worn down, leaving sharp metal exposed and tearing a hole in our new mat. So he wrapped gorilla and electrical tape around them...hopefully that provides enough protection.

We spent the rest of the afternoon relaxing in our chairs...reading...until it got a little chilly and we retreated inside...and that was it...another relatively quiet day....