We had a better sleep last night...being able to run the air conditioner through the evening made a big difference. It was also much quieter on this side of the buildings, away from the main street.

There was no reason to rush this morning since the parts for our trailer weren't due to be delivered until sometime around noon. We had our coffee, showered, had a bite to eat, got the inside of the trailer packed up....and with the laundry bags loaded into the truck, we went off in search of a laundromat. It was just after 9:00.

We found the laundromat and about an hour and a half later, the bags of clean clothes were loaded back into the truck...whew...glad that job is done! It hadn't been my idea to do laundry this morning, but good idea, Steve...might as well take advantage of being near facilities now rather than make a special trip next week.

Next on the agenda was one final grocery shopping trip to Safeway...mainly for fresh vegetables and meat. With the amount of money we have spent on groceries over the last couple of days, you'd think we wouldn't need to shop for at least another couple months...but we know that won't be the case!

After a stop at the liquor store and then at a Husky Station to fuel up the truck, we were back at Jubilee RV by 12:30. As we drove up to the trailer, I noticed a shiny new jack...the part had come in a little early and all the work was done...yay!

Peter greeted us as we got out of the truck and confirmed the work was finished...the tech had worked through his lunch hour to get it done asap for us. Steve went inside with Peter to finish the paperwork while I put the groceries into the trailer.

We want to thank Peter and the techs at Jubilee RV...they were very accommodating, not only in their efforts to get us fixed up and back on the road, but also in making us comfortable in our stay in their parking lot...supplying electricity so we could run the AC and filling our fresh water tank. All folks we had contact with were very friendly and professional.

We were starving and wanted to have lunch before we hit the road, so we quickly walked across the road for a bite to eat at A&W. As we were waiting for the light to change at the crosswalk, a horn honked and a couple was waving at us as they drove by...it was Ray and Deb! They are now staying at Tunkwa Lake, so are obviously out for one of their drives exploring new areas and campgrounds. What timing....that we would be at that crosswalk at the moment they drive by!

About a half hour later we were hitching the trailer back up to the truck...and soon we were on our way back to Paska Lake. This is the view as we leave Kamloops... 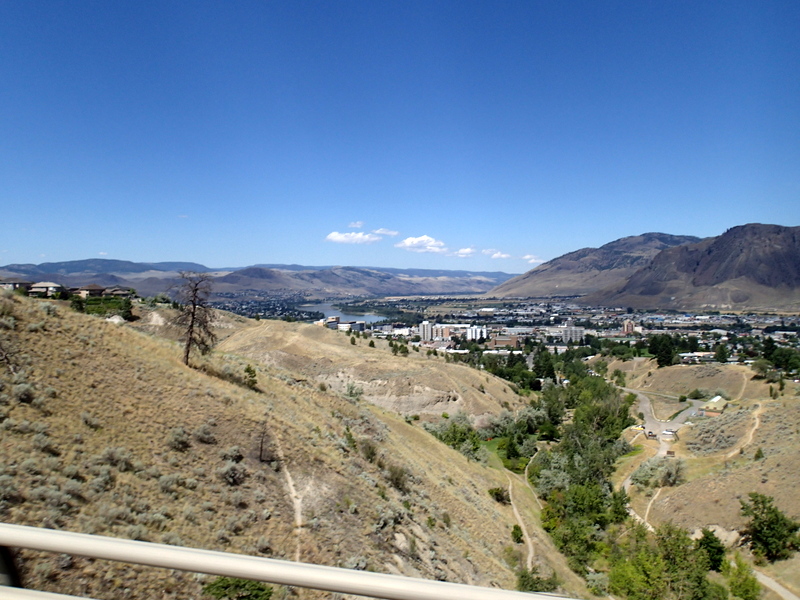 We drove to the sani-dump in Logan Lake to empty the tanks and fill up with fresh water and then back-tracked to the turnoff to Paska Lake. 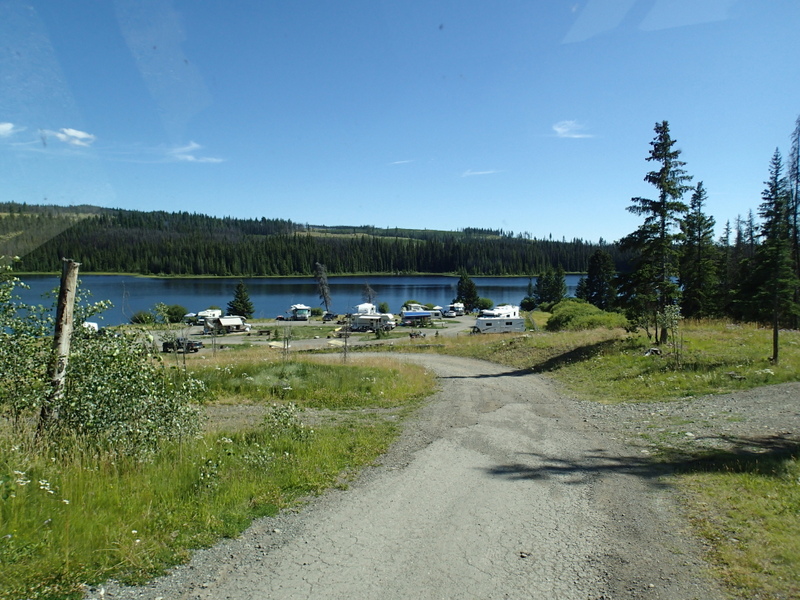 It was going on 3:30 when we pulled into Paska Lake Recreation Site. Our site was waiting for us but we had lots of new neighbours....it was starting to fill up for the long weekend. We managed to get backed into our site, unhitched and all leveled off... the front jacks worked flawlessly! Then the work of unpacking started...very hot work...it was 31C/92F in the trailer.

It was after 5:00 when we decided to take our chairs down to the lakefront and relax....ahhh...such a beautiful spot!

We had a light dinner and then Steve decided to power up the TV and see what programs were on tonight. Well, he expected to just be able to plug the satellite cables back in and all would be fine...after all, we hadn't moved the dish at all. No such luck...we still had a strong signal but the message on the TV said "channels temporarily unavailable"...this message usually indicates that our receivers need to be "pinged". I can do this myself by going on-line to our account...but...we don't have an internet signal here...sheesh! It's also very odd that this would happen after only being gone for two days...it's usually after a couple of weeks of inactivity that it needs to be done.

So we decided a nice evening walk was called for...so we put the laptop in a backpack and with our MiFi in hand, we walked up the hill, across the road and along the trail to the spot where Steve has gone on the quad to get a cell signal. We found a spot with a sporadic signal (one bar, two bars, three bars...down to two then one back up again...etc) and with Steve holding the laptop, I managed to log into our account. The message said that I had been successful but we really wouldn't know for sure until we got back down to the trailer to see. We had left both receivers on...so hopefully... 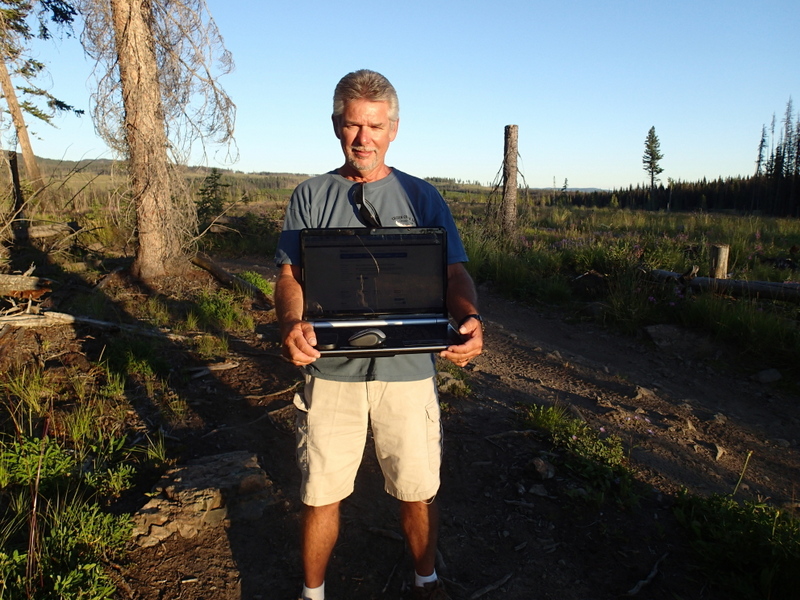 We had to navigate across a creek....I don't have the best balance, so Steve always loves to take a picture of me with my arms stretched out flailing! 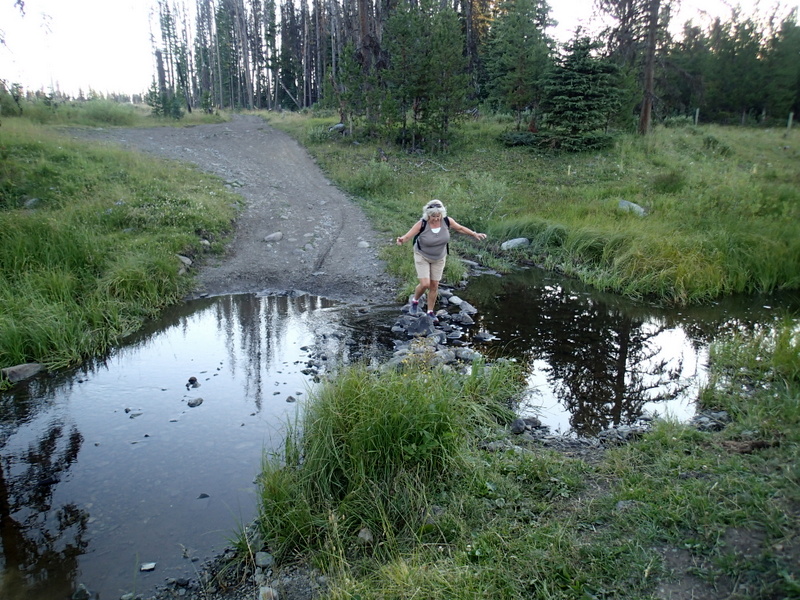 It was actually a really nice walk...it felt good to get out for some exercise! About 45 minutes later we were back...and we had been successful! The channels were active again!