Our Saturday morning was very lazy (okay...more so than usual)....it was cloudy and windy. Of course it was windy....Steve wanted to go out fishing!

It was late morning by the time we had had breakfast...then it was time for a little work. Steve headed outside to tackle the repair on the underbelly using the Gorilla tape this time. While he was doing that, I cleaned up the kitchen and then made some trail bars.

Steve had just finished when another 'Doug' stopped by to introduce himself. This Doug is Sue's husband. We met Sue at the gatehouse when we arrived last Monday. Doug and Sue live (and work) in Port Coquitlam and when the opportunity to work here at the park came up, they decided to spend their vacation working here. Sue has the summer off and Doug, after he finished his 3 weeks vacation, now comes up on weekends. They thought it would be a good way of trying it out to see if they like it before they retire next February. As it stands, they love it and plan on being here full time next season. 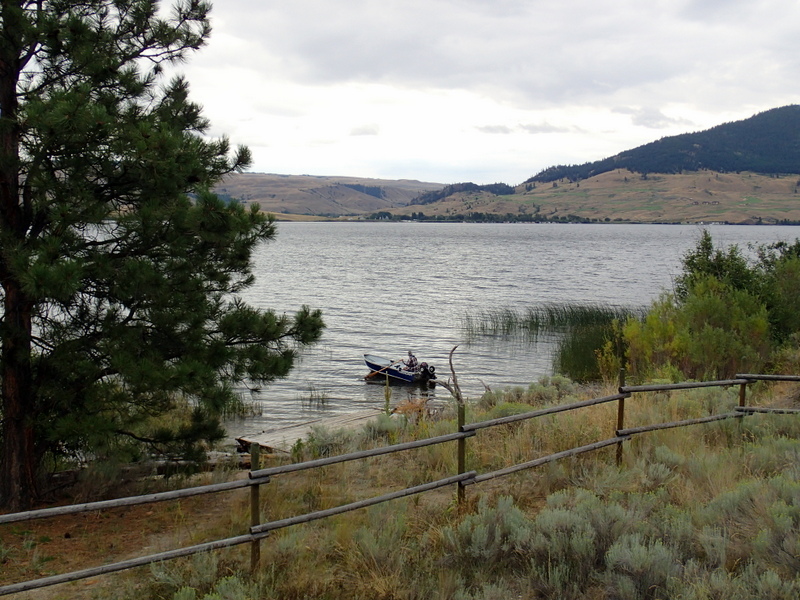 It was early afternoon when Steve decided that the wind had died down enough to go out fishing. I helped him carry his gear down to the boat and then he was off. While he was out, I read my book for a bit and then decided that I should get some exercise, so put on my runners and walked around the whole campground. I used the "My Tracker" app on my phone...1.71 miles (2.75 kms) in 27 minutes.

As I returned to the site, Steve was also just getting back. No fish...too bad, he's dying to catch a Kokanee! I resumed my position in my chair outside reading and he decided to go for a walk. He forgot the camera so missed getting pictures of a fork buck that was about 20 feet away and a huge ant nest that's about 3' tall.

Shortly after 4:00, Doug and Sue (and Tucker, their Golden Retriever) arrived...we had invited them down for happy hour. We enjoyed getting to know them and chatting about life here at Monck. The people working here are wonderful and seem to quite enjoy it. 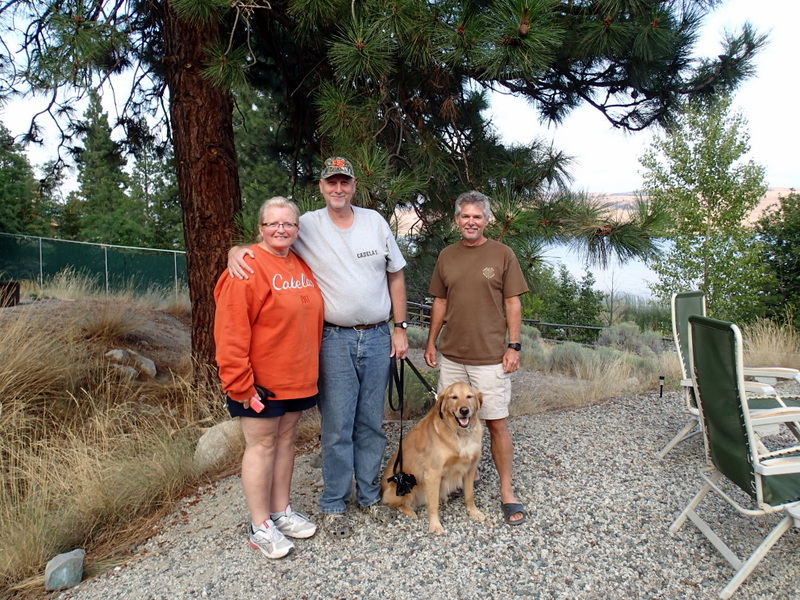 We woke to a much nicer morning Sunday. There seemed to be a bit of a light cloud cover but it soon burned off leaving us lots of sunshine. 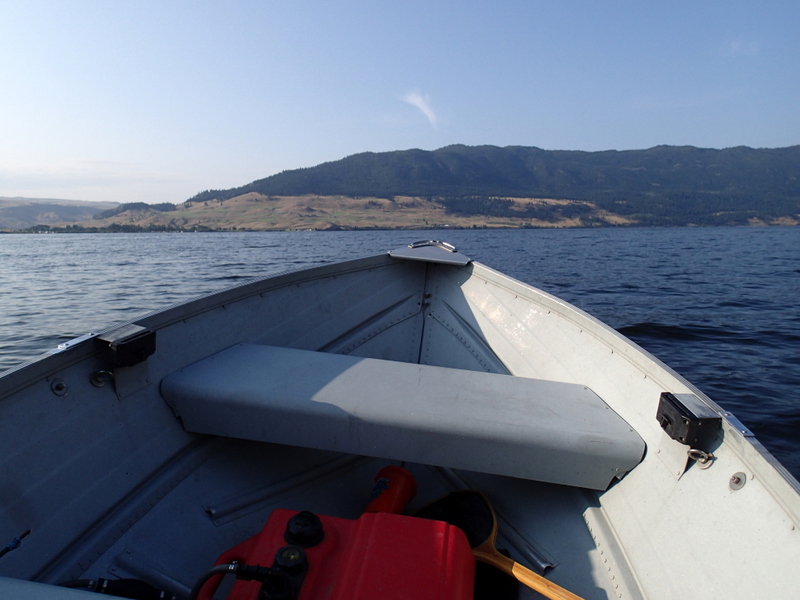 After his coffee, Steve headed out for his morning fish...it was about 8:30....and a beautiful morning! 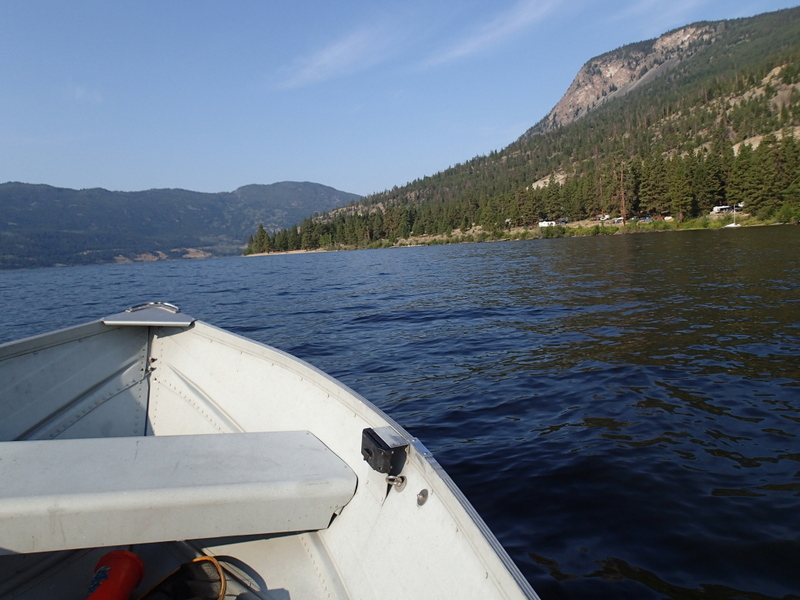 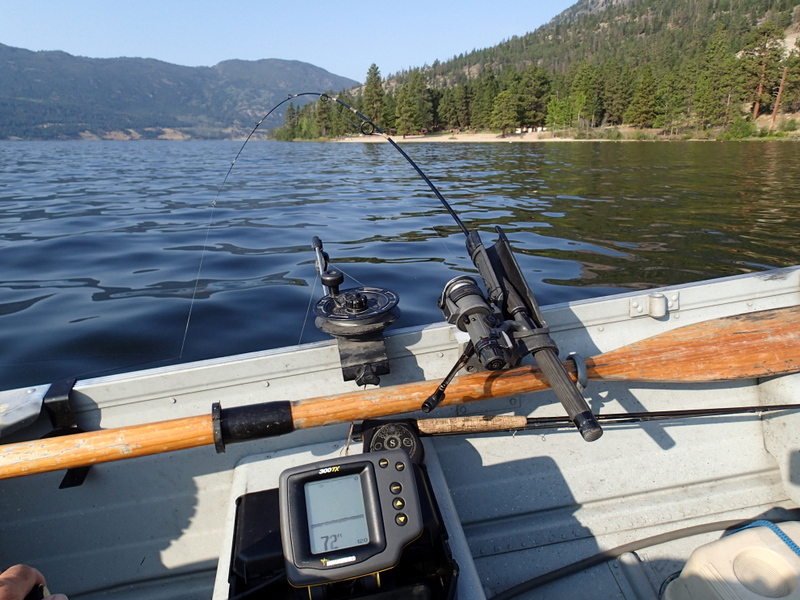 Osprey with a fish... 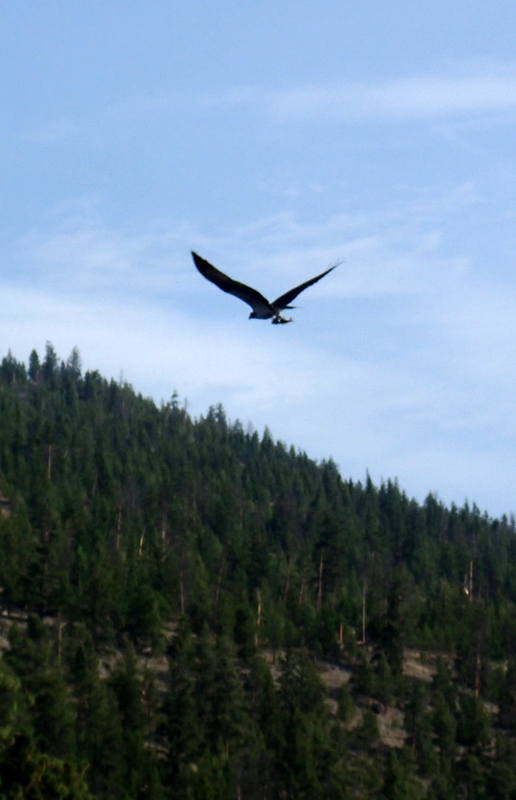 He was back about an hour later. He caught one fish about 12"...he actually didn't know it was on until he brought his line in. It wasn't a trout or a kokanee...he thinks it was a char. I guess if he wants a Kokanee he'll have to go to the liquor store :-) To our American friends Kokanee is a brand of Canadian beer.

We sat outside reading in the shade and then about noon decided that it was time to load the boat back onto the truck. That took about an hour...and then it was time to resume position in our chairs outside...reading.

Shortly before 2:30 we walked up to Doug and Sue's place. They have full hook-ups in the compound and had suggested we come up and take another look at the area should we decide to work here next summer. We sat and chatted with them for a bit and then after hugs and handshakes, we said goodbye...Doug was headed back down to the coast and to work for the week

We stopped on our way back and had a chat with Toni and Doug (the park managers)...and met their son and granddaughter who were visiting for the weekend. We said our goodbyes since we are leaving tomorrow morning...we will stay in touch!

Once home, it was back to sitting in the shade reading...and that was pretty much our day. We have enjoyed our stay here but it is time to move on. We are going to join Ray and Deb at Peter Hope Lake Recreation Site. Hopefully we will also  have an internet signal there but if not....well...stay tuned!