Thursday morning was pretty lazy...both of us enjoying being "on the grid" again. Of course, I had nine days of blogging to catch up on. 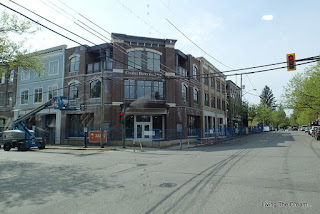 Late morning we headed off to do some shopping...I wanted to do a Costco run, it has been awhile! As we drove through Fort Langley, I took a picture of a building that has been under construction for the past couple of years...it finally looks like it is almost finished. I believe there was quite a bit of controversy over the construction of a 'modern' building along the main street...locals not wanting to take away from the quaintness of this small town.

Before Costco, we went to Walmart and London Drugs...I had a little shopping to do there while Steve wanted to talk to the peeps in the camera department of London Drugs to see about getting his camera cleaned.

Trying to find a parking spot in the Costco parking lot proved to be impossible...what the heck is going on today? We purposely decided to shop today (Thursday) rather than tomorrow or the weekend. There were cars driving around and around looking for a single spot...so the chances of us find 4 spaces in a square together were pretty slim! This was like Christmas at the mall! With the traffic jammed up, we thought we'd never get out of there...but finally, we made our way out. I guess we'll have to do our Costco run another time. So much for lunch at Costco LOL!

Back home, we had lunch and then I settled down at the table with the laptop to take care of some banking and then continue working on the blog. Meanwhile, Steve off-loaded the bikes from the back of the trailer, washed them, pumped up the tires...and got them ready for riding. 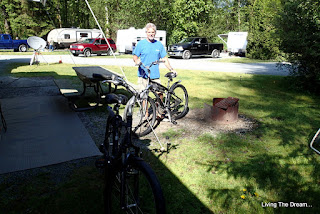 Friday morning we woke to cloudy skies...yup, today the rain and cooler weather is supposed to settle in for a few days. We've been extremely surprised at the fabulous weather we've had since returning to BC. We expected to be in jeans and coats from the time we left Alabama Hills but have spent more time in shorts!

Just before 10:30 we headed off to meet Deb and Ray at Peace Arch RV Park. They arrived there at the end of March and it is a park we want to check out since it looks like we won't be able to get into Fort Camping in November when we get back from our trip.

Peace Arch is the first RV park we stayed at when we left the island after retiring back in 2010. It had been very over-grown back then and not a great experience for our first stop. However, things have changed over the last six years...it is still heavily treed but they have been trimmed, making it more big rig friendly. They have lovely gardens in the courtyard behind the office... 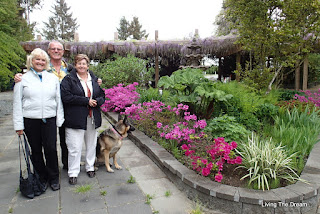 Ray and Deb showed us around and then we stopped at the office to see about booking both storage for our rig while we are gone, as well as a site for our return, until we leave in early January, 2017. As it turns out, you cannot pre-book storage...if any spots are available, you must take and pay for it immediately. They could not say if a spot would be available come October...they were full right now. So we reserved a site for our return at the end of November...and we'll have to continue looking for storage options for the rig.

After that was done, we hopped into Ray and Deb's car and went to Big Ridge Brewing Co. for lunch...enjoying good beer, food...and friends! Great catching up with Deb and Ray! 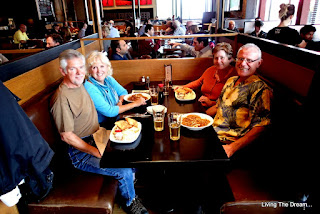 On our way home, we thought we'd give Costco another chance...today, there were a few single parking spots available but nothing for us. Decision made...we will be there at 9:30 tomorrow morning when they open!

The rain was starting to settle in by the time we got home. Steve changed into his comfy clothes and settled in front of the TV to watch "his shows". I walked down to the gatehouse to book a site here for our return to the area in September. We are able to get a site from September 10 to October 10...after that, we will put the rig into storage and visit the kids (on the island and in Coquitlam) before we leave on our trip to Africa and France.