We did a first this morning...we joined a crowd gathering outside of Costco waiting for the doors to open at 9:30.  When we pulled into the parking lot, I was surprised at the number of cars already there...obviously lots of others had the same idea. However, on this trip to Costco, we had no problem finding a parking spot!

We were back home shortly after 11:00 and started on the chore of storing away all of our purchases. I knew it was going to be an expensive shopping trip, but...yikes! Well, we're stocked up on those "Coscto sized" items that we use often...and have room for in the rig (coffee, olive oil, coconut oil, vitamins...just to name a few).

After lunch, Steve headed off into Langley to an ATV/BC meeting. This was a face to face meeting with the Director and Trails Manager of Recreation Sites & Trails BC The lady responsible for bringing in the new registration, licensing, rules and regulations also clarified many issues. Steve found it very informative and enjoyed getting re acquainted with many of the people we've met from various clubs over the years.

While he was gone, I coloured my hair, did a couple of loads of laundry...and basically puttered around the trailer all afternoon, until Steve got home at 5:40. A little while later, we had a wonderful Skype call with Rob, Angie, Conner and Bryce...we are so looking forward to seeing them next week!

Sunday, we headed out late morning...we're finally going to visit Chris and Angela! They just moved into their new home and we could hardly wait to see it. On the way through Fort Langley, we drove by a British Car Show being held at the Community Hall... 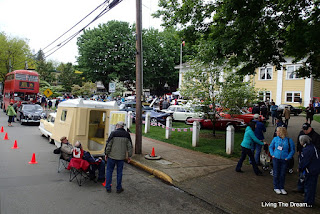 The cars were parked on the front lawn... 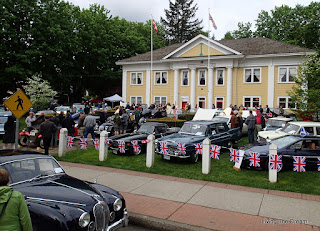 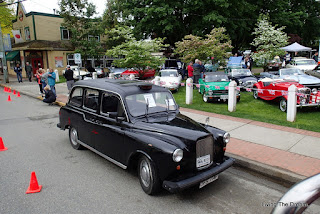 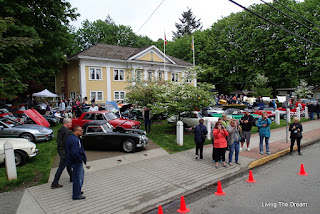 Before reaching Chris and Angela's place, we made a stop at Home Depot...to pick up a house warming gift. Their first home has a small yard, so some outdoor equipment will be required. After making our purchase, we continued the short distance further to their duplex...and were greeted with big hugs! 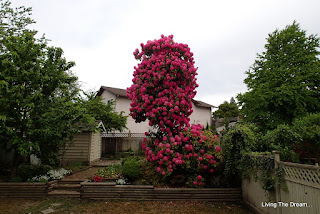 Our tour of their home started with the backyard. They have some yard work to do and plans to expand the deck. Look at the size of that rhododendron! Wow, beautiful!


After they gave us a tour, we sat in the livingroom... 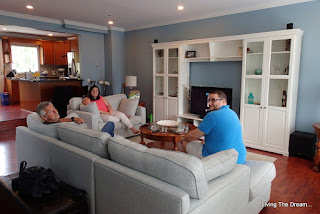 Dexter seems to be settling into his new home...this is the first time he has lived in a home with stairs! 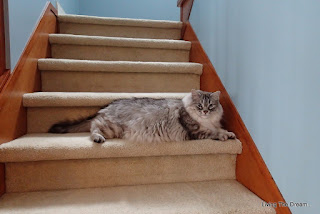 After chatting for a bit, we decided to go to a local pub for lunch...John B Neighbourhood Pub is just a few blocks away... 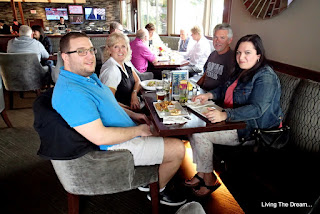 After a great lunch, we returned to Chris and Angela's place where Chris unpacked their house-warming gift...a Ryobi battery operated lawnmower! The batteries are interchangeable with other Ryobi products. 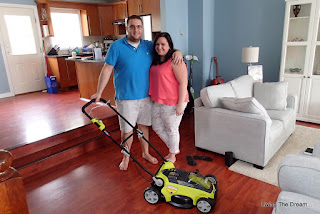 We visited with them a little longer...and next thing we knew it was after 4:00. Time to head home. So after big hugs, we headed off...wonderful seeing you both! You have a lovely new home, Chris and Angela...we couldn't be happier for you! Looking forward to seeing more of you over the next month!

Monday morning we had our usual casual start to the day and then after breakfast and showers, decided to get out for a walk. We went across the bridge and walked along the river. 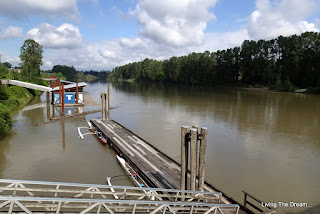 Steve took these pictures from the bridge...looking west. Our campground is on the right... 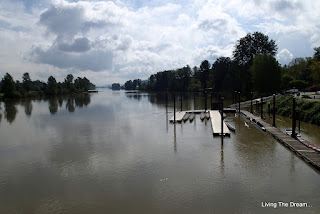 After our three mile walk, we relaxed for a bit, had lunch...and then headed off for our doctor appointments. We really would like to find a new doctor...too many times we make appointments only to have them re-scheduled for another day. This is something that is tough in our lifestyle because we really have to plan our time with so much we need to do during our short time here. The other thing we hate are the wait times...our appointments were for 12:30 and 12:40. We were finally called into a room at 2:00 (going together to hopefully speed things up)...and the doctor didn't come in to see us until 2:30. So that was a 2 hour wait! This is the third time this has happened. Never before have we heard so many negative comments from fellow patients.

On our way home, Steve dropped me off in Fort Langley so that I could drop off my prescription for renewal. I enjoyed a leisurely walk back to the park...where I found Steve relaxing in his recliner watching one of "his shows" on TV.

And there you have it...that's what we have been up to for the last few days. Another couple of days and we will head over to the island to see Rob, Angie, Conner and Bryce! Looking forward to that!

Oh...and we have heard from Jim and Barb (Jim and Barb's RV Adventure). Last winter we spent time with them in Quartzsite and after finding out they were planning a trip to Alaska this summer, we offered to show them the Greater Vancouver area...and recommended they also take in Victoria. So when planning their route, they decided to go along the Oregon coast up through Washington State, through the Olympic Peninsula, over to Anacortes...and take the ferry over to Sidney, BC. They will be there on May 2...perfect timing! We plan on showing them around the lower island (Sidney and Victoria) where we lived and worked...and then come back to Fort Langley and show them around here. Really looking forward to seeing and spending time with them again!