Saturday and Sunday were pretty much chore days...getting ready to leave on Monday. Mind you, I wasn't moving too fast either as I hobbled around with a sore knee.

The toilet was starting to "burp" when flushed, so on Saturday Steve ended up emptying the holding tanks and flushing the black tank...he had planned to do that on Sunday but that couldn't wait.

With that done, it was time to head into town to stock up on a few groceries for the coming week. Steve's eyes lit up when he saw an A&W Restaurant next door to the grocery store...and as I expected, after loading the groceries into the truck, he suggested we go there for lunch. He loves the 'Double Teen Burgers'...so today we had burgers and beer for lunch, root-beer, that is!

On the way home, I took this picture of the main street of Osoyoos... 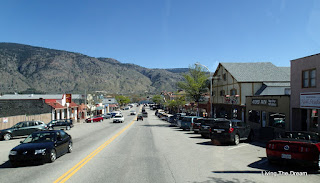 After putting the groceries away, we changed into our bathing suits and went to check out the pool and hot tub. They are both indoors...and only open from October to May. For all of the guests wintering in the park...I guess they figure it's not needed during the summer once the lake warms up. 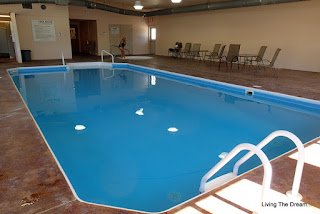 The hot tub was very hot...I was having a tough time getting into it! I sat with the jets on my knee and it seemed to help a lot. 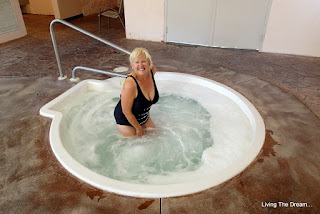 Sunday my knee was much better...it was still sore but I could at least walk much better on it. It was laundry day for me...and we had quite a mountain of it as it had been a couple of weeks since I'd last done it.

Donald and Daisy Duck were back for breakfast again today...and quite vocal about wanting something to eat... 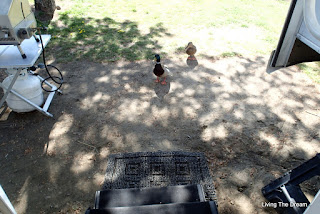 With the laundry done, I reclined in my chair outside while Steve went for a walk. The blossoms on the trees are lovely! 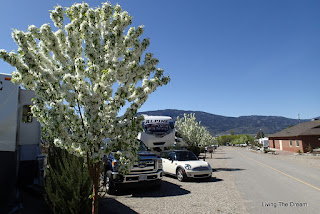 When Steve got back, he resumed his position outside...Donald and Daisy are back and squawking for more food. Steve refused so they decided to settle down and relax with him... 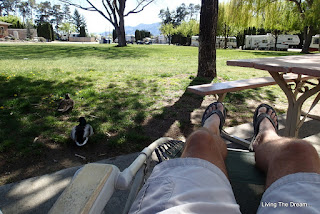 After hitching up the trailer to the truck (one less thing to do in the morning), we relaxed for the rest of the afternoon...Steve with his magazine and me with my crocheting.

Then it was time for our last happy hour with Sue, Doug and Tucker. It's been so good catching up with them! Poor Tucker is trying desperately to get more cookies from his "Cookie Auntie", he's poked his head under the arm rest! 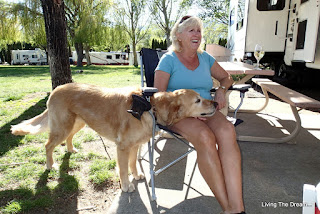 At 6:00 dinner was ready...Steve had grilled a couple of port tenderloin on the barbecue, I made rice and Doug and Sue brought Caesar salad and a pie...a delicious dinner! 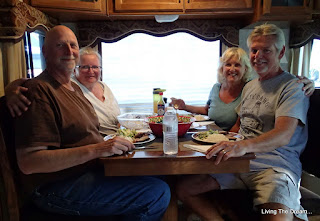 Then after dinner, we all settled in front of the TV to watch the premier of Season 2 of Outlander! Very much anticipated by Sue and I!

Just before 8:30, with the show over, we called it a night. Thanks so much Doug and Sue for all of your hospitality...it has been great spending time with you! Good luck with your summer job...we look forward to seeing you at Tunkwa Lake!

We will be heading to Old Hedley Road East Forestry Recreation Site between Keromeos and Princeton tomorrow. It is very unlikely that we will have an internet signal there..so stay tuned, we'll be back as soon as we can!