Not a lot happened Sunday...we had a nice long coffee start to the day then got ourselves decent and ready to face the day.

Now that I have a new sim card, I called Telus to get an account set up and to get my MiFi working. It took forever! I think it being Sunday, it was training the newbie guy. Don't get me wrong, he was very friendly, personable and professional, apologizing for taking so long...but what an ordeal! I almost wish that I had spent the $35 yesterday to have the folks at the Telus dealer (Tom Harris) just go ahead and set it up. Geez! 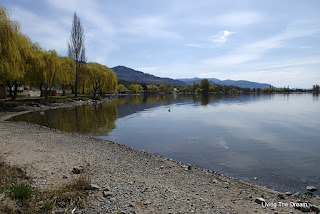 By this time, it was late morning...time to get out for a walk. Steve and I walked around the whole campground...it's pretty darn big! The water was as flat as a mirror... 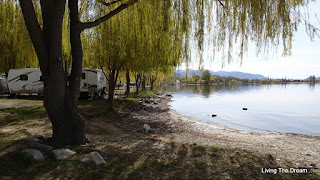 That's our rig up there...second from the right... 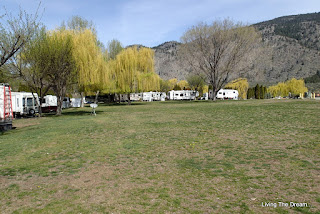 Back home, I worked on our blog for a bit and then realized that I hadn't bought any mushrooms for the spaghetti sauce.  We hadn't had a good feast of spaghetti for a long time, so I thought I'd make it tonight...we also invited Sue and Doug to join us. So at about 2:00, Steve and I made a quick trip to AG Foods in town. On our way home, I received a text from Chris (our youngest son) asking if we were available for a Skype call...you betcha...just give us about 10 minutes!

We had a great chat with Chris and Angela...getting caught up on the news about their new home. After painting, they expect to move in in about 3 weeks. Nice...about the time we get down to the lower mainland. Looking forward to seeing it! They also said that our truck would fit in their driveway...it's big enough for 4 cars, so the truck shouldn't be a problem...perfect!

After our call, I got to work on making the spaghetti sauce and even managed to get the romaine lettuce washed for Caesar salad...and the table set...all before 4:00 and happy hour!

Doug, Sue and Tucker joined us for bevies in the late afternoon sunshine...or what there was of it. It had actually gotten quite cloudy out. A change in the weather is on its way for tomorrow...there is actually rain in the forecast! 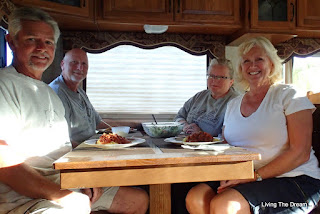 At about 6:00 Doug and Sue walked Tucker back to their place...and were back just as the spaghetti noodles were ready...dinner time!

After dinner, we relaxed in the living room for a bit, had dessert...and then it was time to return to the table for Rummikub! We had a fun time playing five games...Doug and Sue each won one game...Steve none...and the rest went to me. Yes, those are shot glasses there on the table...we had quite a variety of liqueurs...Amaretto, Sambuca and Kahlua. Maybe that's why I won so many games...LOL! 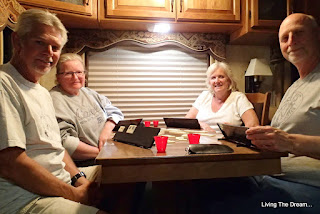 The weather forecasters were right on track...we woke to rain Monday morning. Needless to say, it was very much a lazy day! I worked on the blog, did some banking...and some general surfing on the web. 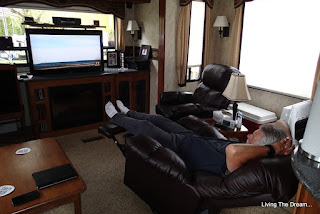 It wasn't much different for Steve...after breakfast, showering and drying the dishes...he settled in front of the TV to watch a variety of "his shows"...

The sun did manage to peek out for a little while in the afternoon, so we got out for a walk around the campground. After that bit of exercise, though, we hunkered back down inside...it was chilly out today with a high of 14C/57F!

Shortly after 4:00, Doug and Sue joined us for a couple of hours of bevies and conversation...always nice! Looking out our window we noticed a couple of other visitors as well. The birds have ignored our bird feeder but the ducks like to be near it... 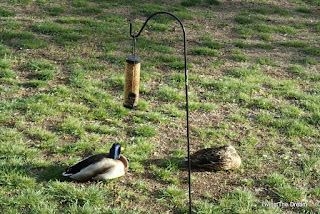 We are looking forward to the return of sunshine and warmer temps tomorrow!

Posted by Dianne and Steve at 7:44 AM