I woke up numerous times through the night to the sound of rain on the roof (I actually love that sound as I'm snuggled down under the covers in bed)...and it was still raining when we got up this morning. It didn't last, though, and to our surprise the clouds broke up a bit allowing small patches of blue sky to show with the occasional rays of sunshine peeking through.

Other than getting out for a walk, we really didn't do much today. Steve spent a good part of the afternoon replying to an email...a fellow Canadian had a lot of questions about joining this lifestyle. While he was doing that, I settled on the sofa, reading...and closing my eyes for a bit.

We were expecting friends from Ontario but they postponed their visit due to the rain. Dave and Lisa and Armand and Leonie are staying in Buckeye, AZ and were going to drive out to Quartzsite for the day. Hopefully, the weather improves and we see them tomorrow!

Saturday was another mostly cloudy day...but at least the cloud was broken allowing bits of sun to come through.

After a pretty lazy morning, we were sitting outside taking in a little sunshine that was peeking through when the phone rang...it was Leonie letting us know that they were at the entrance. So Steve gave directions to where he would meet them and hopped on his quad to go get them.

Dave and Lisa, and Armand and Leonie are folks we first met back in the fall of 2010. We were staying at an RV park in Winnipeg when Dave came over to chat with Steve. When he heard that we were heading east, he said that we would be going through Sault Ste Marie, Ontario...and that we must stop and look him up. He gave Steve his phone number and told us to call him when we got there...so we did! We must admit it was a little out of our comfort zone because Steve had really only talked to Dave for a couple of minutes, but we "bit the bullet" and did it. So Dave...you're responsible for turning us into a couple of social butterflies! We ended up going out for a nice dinner with him...and met his wife, Lisa and Lisa's sister, Leonie and her husband, Armand. We really had a nice visit with them and have stayed in touch ever since. We have met up with Leonie and Armand a couple of times down here in Arizona but this is the first time we have seen Dave and Lisa since September, 2010. So just a warning...if you threaten us with an invite you might find us at your door step! :-) 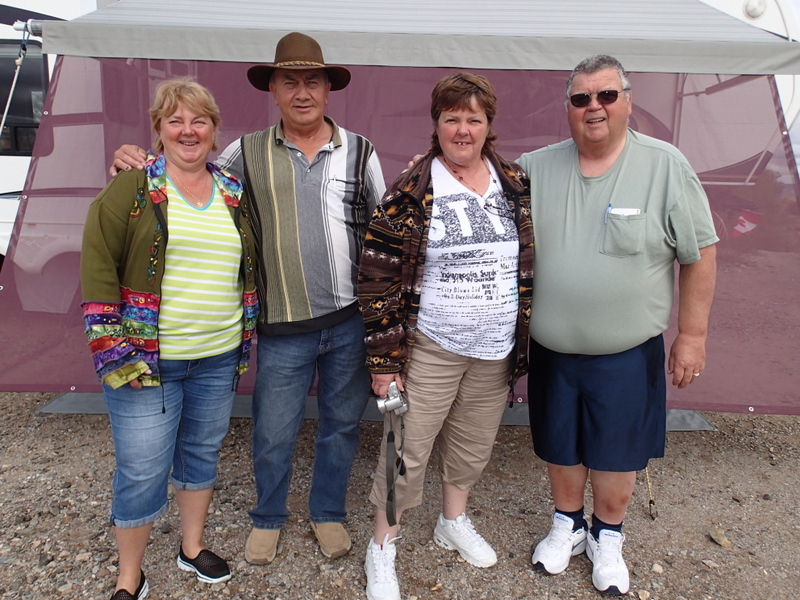 We had a wonderful visit with the four of them and then a couple of hours later, they headed off to explore Quartzsite a bit. So good seeing you all! (left to right....Leonie, Armand, Lisa and Dave)

After they left, we puttered around doing a few chores and then Steve decided to fill the fresh water tank in the trailer, so he headed off on his quad, trailer in tow to the water taps. While he did that, I decided to grab my kindle and sit outside reading.

Just before 4:00, we put a few beer in a small cooler and jumped on our quads and headed over to see Rob and Joyce, and Tom and Joyce. We hadn't seen them since last week, so we thought we'd invite ourselves over for happy hour. Tom and Joyce's fifth-wheel made a nice wind break so we sat chatting there and as the sun went down, Tom got a campfire going and we continued a little while longer enjoying the fire and the company. Unfortunately, we forgot to bring our camera...not only would it have been nice to get a picture of us enjoying our happy hour together, we also missed taking a picture of the beautiful mountains lit up as the sun went down!

It was going on 6:00 when we thanked them for a lovely evening, said goodnight, and got back on our quads to head home. Driving at night around here is always a bit of a challenge...everything looks so different! But we made it.

After a light dinner, we settled in front of the TV and watched a movie. We're supposed to be back to sunshine and clear skies tomorrow...sure hope they are right!

Posted by Dianne and Steve at 1:48 PM