We woke to clear sky this morning...YAY! We're back to blue sky and sunshine! And the forecast for the next week is for temperatures in the high 70's!

After our usual start to the day, we got our butts in gear...we had a few chores to do around here before we could relax in the sunshine. Steve went into town to fill up both propane tanks from the trailer. When he got back, we took the boat off the truck in preparation for our trip into Phoenix tomorrow to have the exhaust brake squeal addressed (again...4th time). Then he puttered around outside while I started up the generator and vacuumed inside. 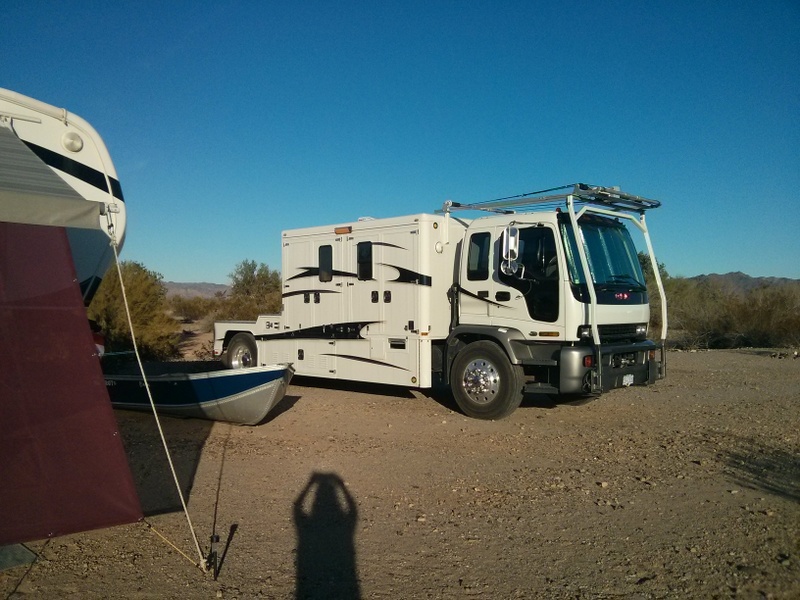 Finally, with the work done, we were able to relax in our chairs outside and enjoy the afternoon sunshine. Buster looks funny without his hat on! (LOL!)... 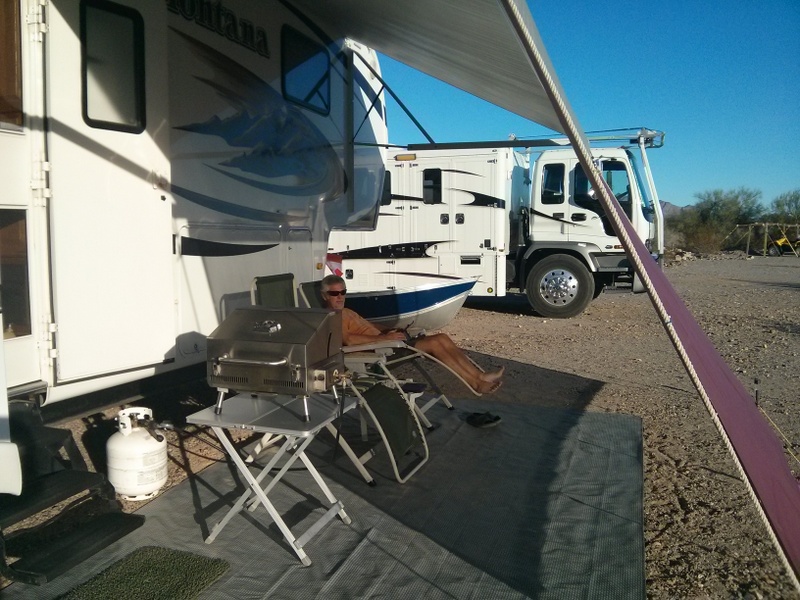 Monday morning we were out of bed at 5:30 and on the road shortly after 6:30...on our way into Phoenix for our appointment at Midway Chev. As we neared Phoenix, the layer of smog over the city is really noticeable. We have just left the I-10 and are heading north on Loop 101...

We passed the arena where the Super Bowl was held yesterday... 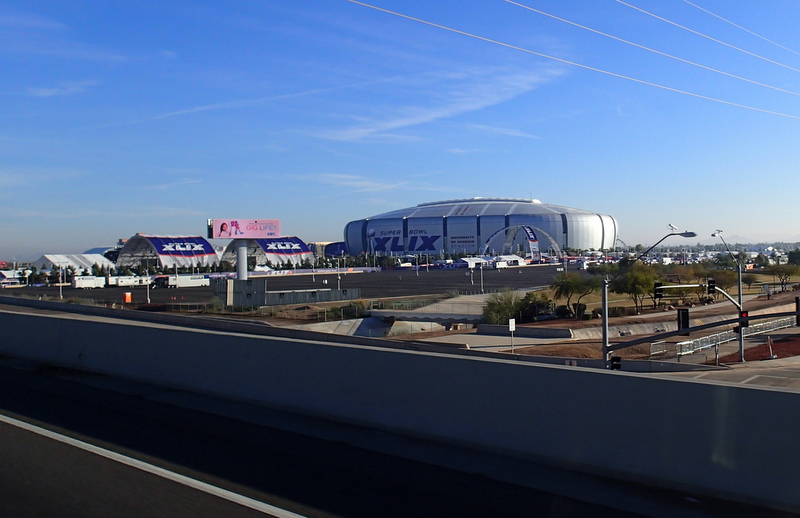 We arrived at Midway just before 9:30. After talking to Dan (our usual Service Rep, Brian, was away), we had the shuttle drop us off at Arrowhead Mall (as usual). We headed directly to Super Cuts where Steve had a long overdue haircut. While he was doing that, I wandered around Macy's and then managed to find an optical store that fixed Steve's reading glasses.

After his haircut, Steve sat in the food court for a bit with the iPad reading while I did a little more wandering around the stores. I had just sat back down with him when he got a call from Dan about the unusual wear on the front tires. The tech said that a rod in the steering assembly had a lot of play in it. What...?! They sent us to a commercial tire dealer where we had our front tires re-balanced because they said the front end was fine when we were there in December?!

It was after 11:30 when we headed out of the mall to find a brewery/restaurant that, according to Google maps, was nearby. We had no problem finding Rock Bottom Restaurant and Brewery and next thing we knew, we were sitting in the bar side trying to decide what beer to have. 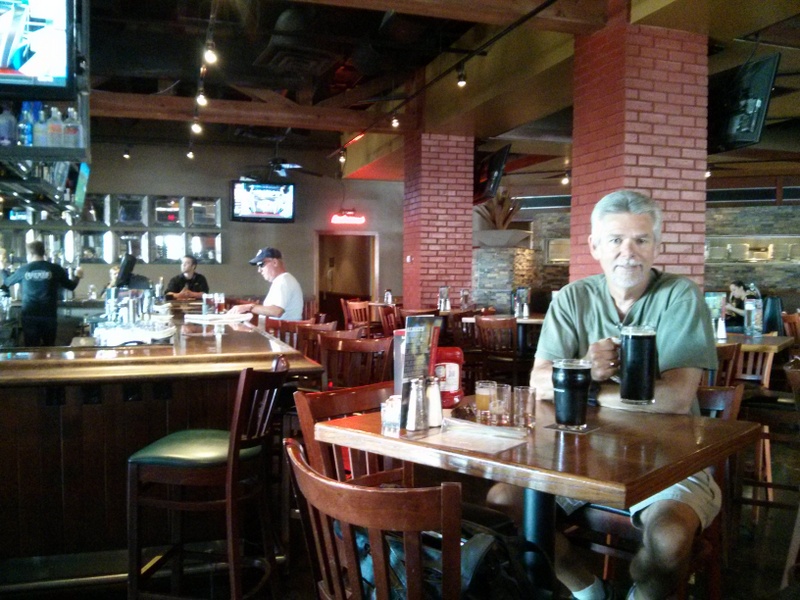 The waiter brought four samples and we chose one of their specialty dark beers...that I can't remember the name of...cheers!

Haircut, beer and a burger...life is good! 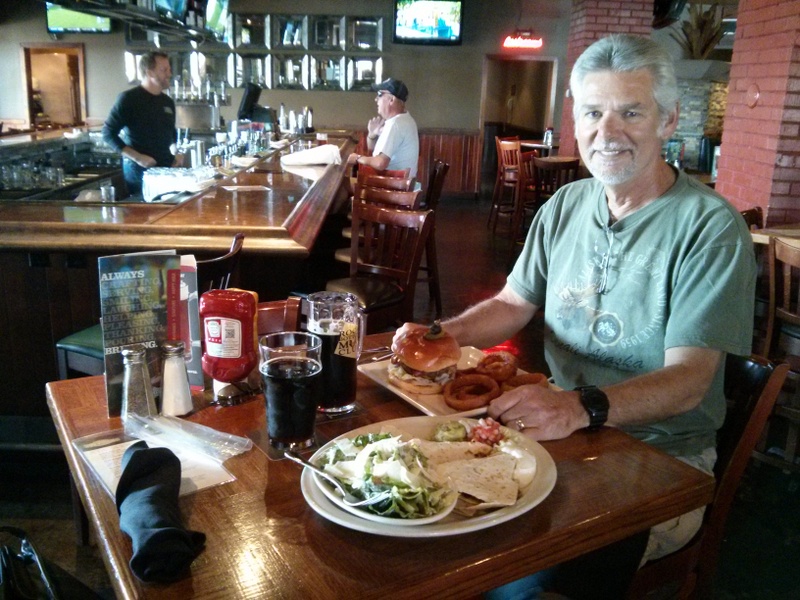 After lunch, we called for the shuttle to pick us up. While we were being driven back we got a call that the truck was ready...sweet.  It was going on 2:30 by the time we were back at Midway. This time they replaced the EGR cooler instead of just the gasket. The tech showed Steve the old EGR cooler and said that if the new one squeals again the next option is replacing the manifold. We hope this doesn't happen because the four previous repairs were during our extended warranty period which just happened to expire last month. Steve doesn't want to deal with a dispute with GM for coverage.

We left Midway and stopped at a Shell Station and fueled up the truck...$2.32/gallon...wow! Then we made one more stop before heading home...Costco! I would have been out of Costco in about 40 minutes but I ended up having an issue with my American Express credit card...it wouldn't go through. To make a long story short, it ended up being because my card is from Canada. Costco in Canada stopped using American Express at the end of December, 2014...Costco in the USA still uses American Express, so I figured that I would be okay using it while down here. Apparently not. I guess there is a new card waiting for me at home. Anyway, the only other method of payment they would accept was my debit card...well, at least that worked! Just not looking forward to seeing the amount that was actually debited...with the Canadian dollar at 79 cents US!

We arrived back home just before 7:00...a long day after being up so early! We unloaded the groceries and got them put away, had a light snack and then relaxed in front of the TV for the rest of the evening.

Tuesday was not a very exciting day...basically, it was a work day. After exercises, showers and breakfast, it ended up being late morning by the time we headed into town. Steve dropped me (and a ton of dirty laundry) off at the laundromat then went to check out our warranty replacement wheels that arrived at Love's Truck Tire Center last week. We'll be getting the wheels put on the trailer when we leave here towards the end of February. While he was waiting to speak to the service manager he noticed tire wear pattern charts on the wall. After researching countless websites he was never able to find our wear pattern listed, but here it was! It was listed as "depression wear" and one of the causes was worn shocks. Steve explained our situation to the service manager and after inspecting our shocks he confirmed that they were shot...he pointed out the wear marks to Steve. So Steve will be ordering shocks tomorrow and have them shipped to Love's for installation. Why didn't Midway Chev find this during their inspection of our front end?  Grrrr!!!!

I was waiting for him when he returned to the laundromat to pick me up...the clean, wet laundry was ready to be hung on the clothesline back home. So, once home, I took care of that while Steve emptied the trailer's holding tanks and filled up with fresh water. And that was it...a very busy work day! BUT...it was a beautiful hot sunny day...love it!