Wednesday was basically a work day. After breakfast, Steve headed out to Abbotsford to pick up the quads from G.A. Checkpoint Yamaha. While he was gone, I cleaned up and then crossed off one item from my "to-do" list...phone Pacific Blue Cross and purchase out travel insurance.

When Steve got back, I was busy working on our blog...it took a long time to pick out pictures to post from the roughly 200 plus taken at the wedding! I spent the rest of the afternoon working on the blog and cleaning out a cupboard...multitasking haha! Steve washed and waxed the boat and then loaded it back onto the truck.

We tried sitting outside for happy hour but what sun there had been had disappeared behind clouds, so we retreated inside.

We woke to another cloudy...and cooler, morning Thursday. We enjoyed our usual start to the day, watching an episode of Outlander that we had pvr'd.

Then it was time to get to work. Steve headed outside to get started on stage one of washing the trailer...the roof and slide toppers and awning. I had just finished cleaning up the kitchen and was starting to treat all of the wood cabinets when Ray and Deb stopped by. Deb is just dropping Ray off and then going shopping...do I want to join her? Sure do! I'll wait until we get across the border to do a big grocery shop but we still have a few days and I need a few things.

We made our rounds at a few stores...Deb is serving an early Thanksgiving Dinner for seven this Saturday and needed to find all of the ingredients for her dishes. On our way home, we stopped in Fort Langley for lunch. Beatniks Bistro is always very busy and has a large outside patio area but it's a spot we have never tried. Deb lucked out on a parking spot right out front and we enjoyed a lovely lunch in the sunshine, sharing their lunch special...a smoked tuna BLT sandwich. Delicious!

It was about 2:00 when Deb dropped me off. I put away the few things that I had purchased and got right back to work polishing the wood...there's a lot of wood in the trailer!

Steve was still hard at work cleaning the awning and slide toppers. It was almost 3:30 by the time he was finished. I'd had enough by this time as well and we relaxed for a bit before walking down to Deb and Ray's to join them for happy hour.

I had a doctor's appointment Friday morning at 8:30 so was up and showered and ready to go when the phone rang at 8:00. It was the doctor's office wanting to reschedule my appointment. Well, it has to be today since we are leaving Monday...okay, come in at 11:45.

I decided to walk into town first thing to pick up a few things...after a stop at Pharmasave and Lee's Market, I was back home. It was a beautiful morning! The Fraser River was the lowest I've ever seen it...the tide was obviously out... 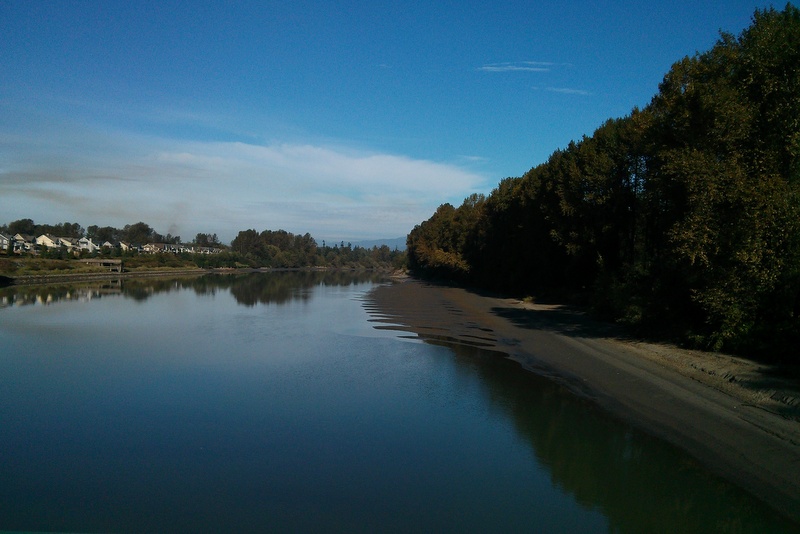 When I got back from town, Steve was busy washing the trailer. I cleaned up inside and then headed off for my doctor's appointment. I was gone for over two hours! My appointment was for 11:45...it was 12:55 by the time I got in...sheesh! All because I forgot to ask him to send a referral to my Orthopedic Surgeon last month when I saw him. Oh well...

I spent the rest of the afternoon washing floors (that took hours...haha!) and put on a load of laundry while Steve continued working on the trailer. He had to use wax to get the black streaks off... 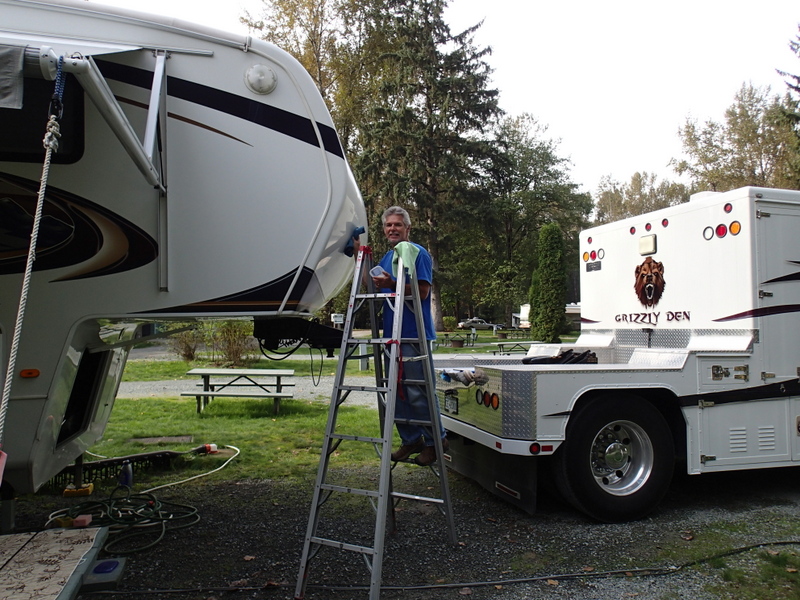 When he had finished doing that, it was my turn to use the ladder and clean the water-spots off the windows. We were all finished just in time for Deb and Ray to join us for happy hour...ahhh...

Saturday morning Steve was back outside...washing the truck. He's had three full days of washing and he is tired and sore! Oh, by the way, it rained last night...that's because Steve washed the trailer yesterday...it never fails and is becoming quite the joke! He washed the truck today...hmmm...I guess that means it's going to rain again!

While Steve was outside working, I cleaned up inside and then chopped the veggies and shredded the cheese for tacos...Chris and Angela are coming for dinner tonight. After I had finished that, it was time to settle down in front of the laptop and do some banking...something I had been putting off.

By the time I was finished, Steve was too and we had time for a bowl of soup for lunch before our friends, Sue and Doug arrived for a quick visit. They are the work-camper couple we met at Monck Provincial Park in August. We had a lovely, albeit short, visit before they had to head off to meet friends for a late lunch/early dinner (lunner?? haha)

Newlyweds Chris and Angela arrived at about 4:15. We sat outside visiting and then retreated inside for dinner. 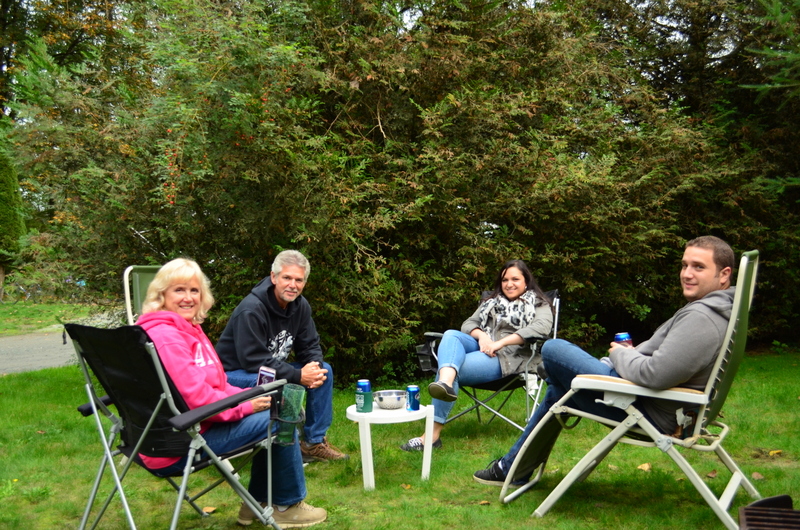 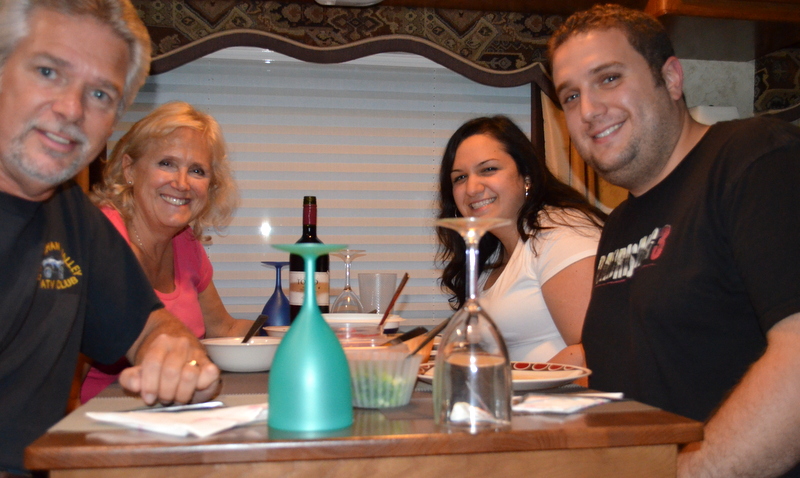 After coffee and pumpkin pie, we were back sitting at the table playing Rummikub...a new game for Angela and Chris. They caught on quickly and we had fun playing five games...I won the first three games...then Chris one and Angela won our final game...Steve was skunked! 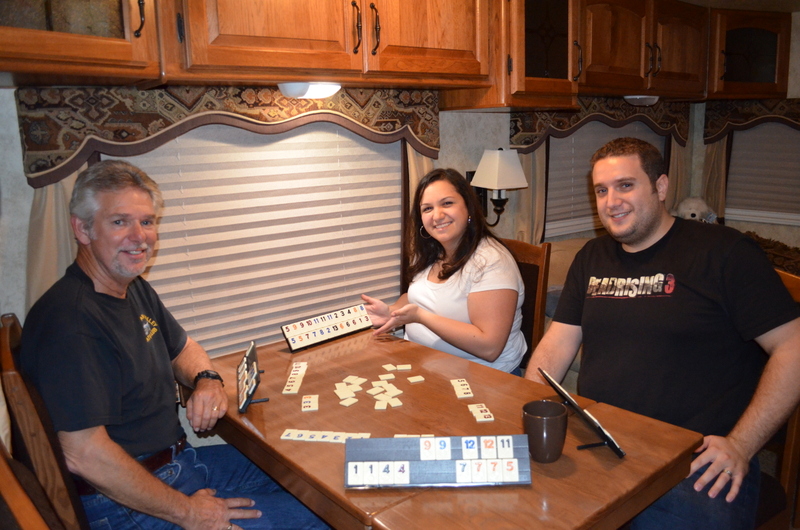 It was going on 10:00 when, after big hugs, Chris and Angela headed off. It was wonderful seeing them one last time before we leave...it will be Skype calls now until next April.

Sunday was another work day. I cleaned up the kitchen, put on three loads of laundry, scrubbed the shower stall and bathroom, and gave the trailer a thorough vacuuming...along with a bunch of puttering around, just getting things ready to leave tomorrow.

Steve had a similar day...putting tire dressing on the truck and trailer tires, checking tire pressures, flushing the tanks, equalizing the trailer batteries...along with a bunch of other stuff, getting ready to leave tomorrow.

We also had a nice Skype chat with Rob and Conner...darn, he's cute! We're going to miss the little guy...thank goodness for Skype!

At 4:00 we walked down to Deb and Ray's. They had invited us for happy hour and dinner. 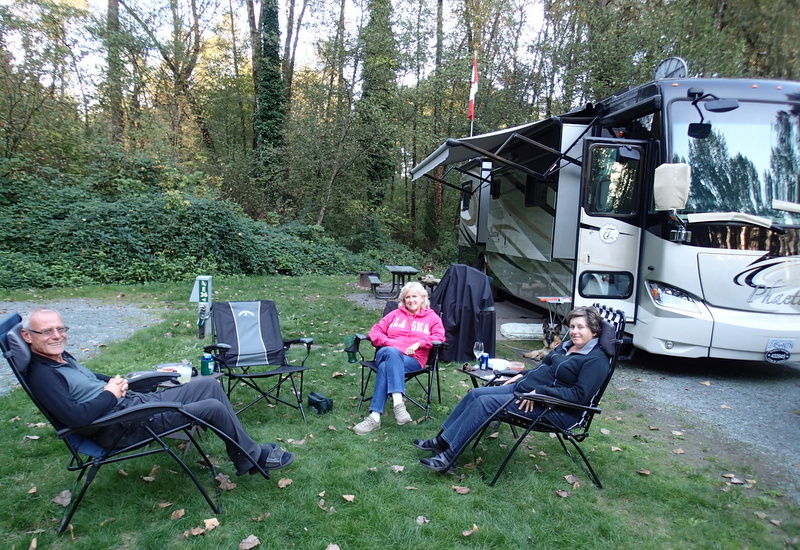 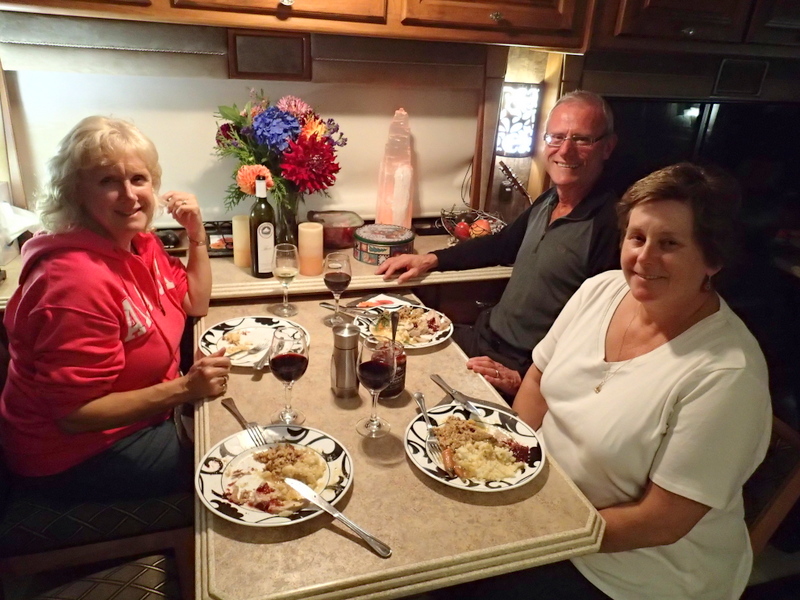 We had a delicious turkey dinner...thanks for the early Thanksgiving Dinner! As usual, we enjoyed our visit with Ray and Deb...bye for now, we'll see you sometime, somewhere down south! Posted by Dianne and Steve at 6:30 AM