Although awake early...we seem to wake up at our usual time even though we didn't get to sleep until much later than usual (after 2 am!)...we crawled out of bed at about 8:30. We sat enjoying a morning cup of coffee in our room and then decided it was time to get moving.

It was about 10:00 when we decided to take our suitcase down to the car. While in the lobby, Chris and Angela came down...well, Chris forgot to pack his runners so all he had to put on were the shiny black shoes he wore with this tux! When he loaded his gear into the box of his father-in-law's truck he got his crotch wet as well, so it looked like he peed himself. Nice look, Chris! Too funny! Steve turned to Luigi and said he's all yours! 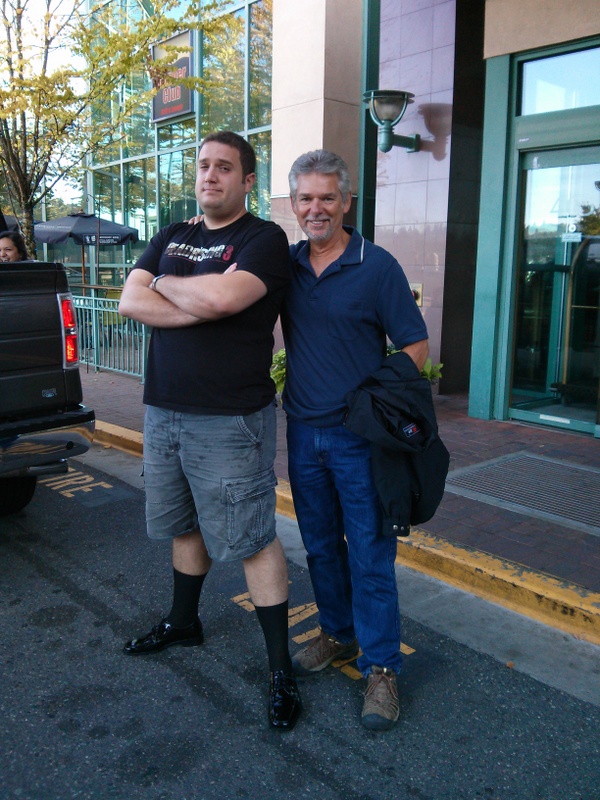 A group of us met at 11:00 in the hotel restaurant for the Sunday Brunch. Conner sat at the head of the table entertaining us all. Left to right...Esther, Gordon, Nadine, Mike, Amanda, Matt, Conner, Rob, Angie, Bev, Rob and Steve... 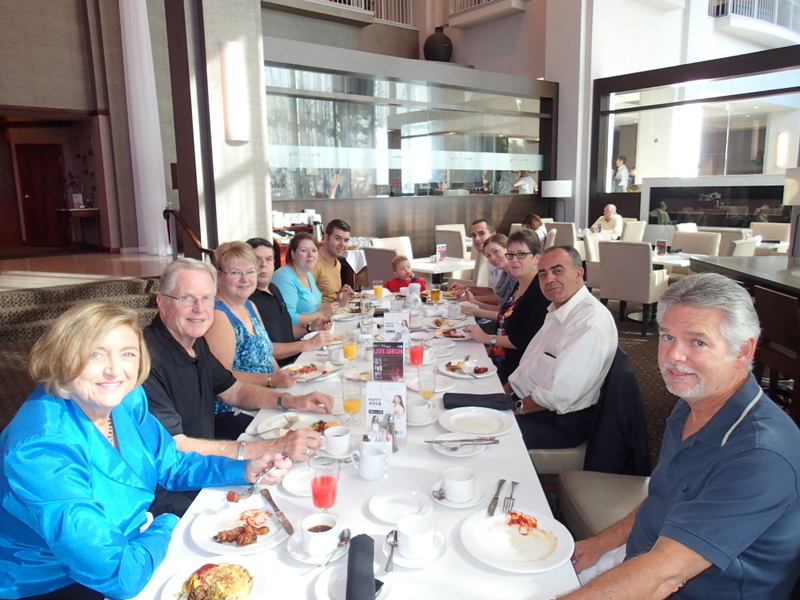 After brunch, Steve and I went to Luigi and Lucy's house where Angela and Chris were opening gifts. 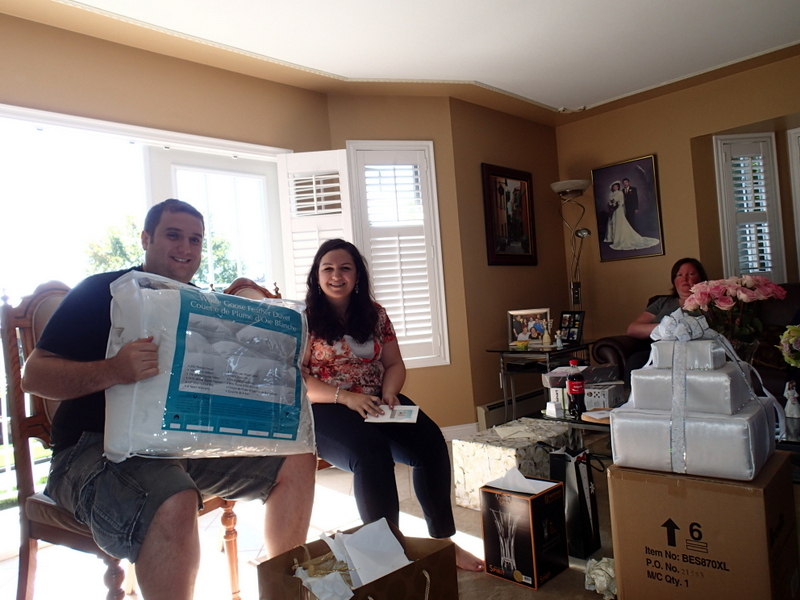 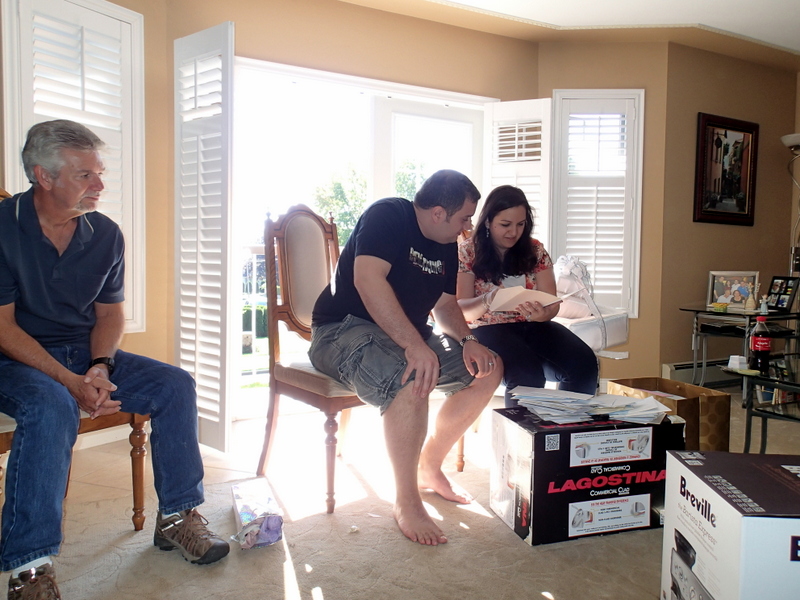 After the gifts, there was still a stack of cards to open...they decided to take them home and open them later. They were so tired...and looking forward to some down time by themselves! We enjoyed our visit with the family and then said our goodbyes.

A family gathering of Steve's cousins and their kids, along with Uncle Gordon and Aunt Esther is taking place this afternoon at (cousin) Cheryl and Grant's house. They decided to take advantage of having all out-of-towners together to have a memorial service for cousin Jamie, who passed away a couple of months ago. By no means did they want to take away from the "wedding weekend" but it just made sense to take advantage of Gordon and Esther being here from Edmonton. 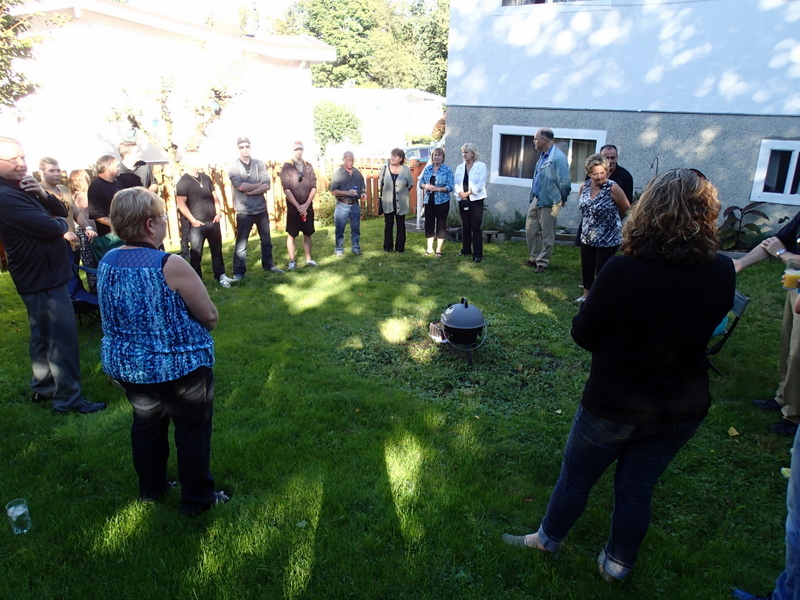 The Reverend (Uncle) Gordon is Steve's mom's brother and being the last elder "Oaks" alive is the pillar of the Oaks family. He gave a lovely memorial to James Oaks (cousin to Steve, Nadine and Dave; brother to Bev and Cheryl) 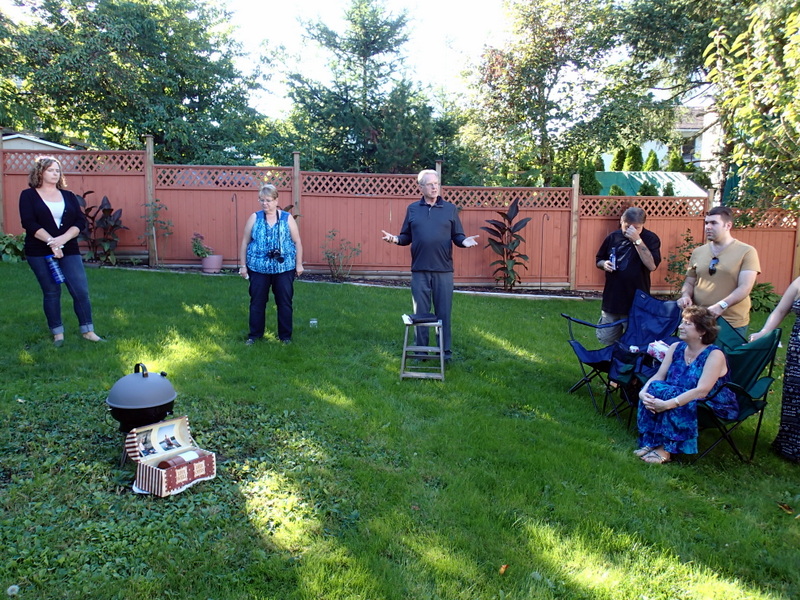 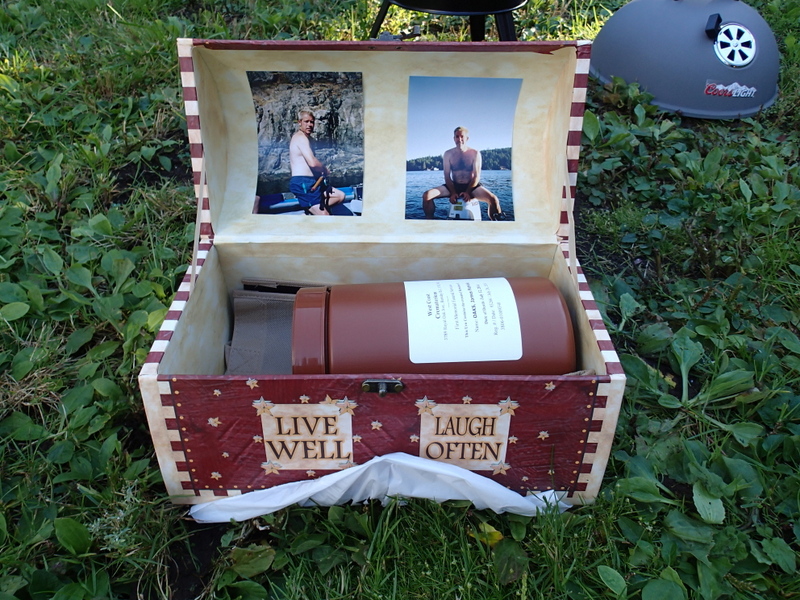 Afterwards, we spent the rest of the afternoon visiting and eating! Dave barbecued a salmon filet on cedar planks that Rob had caught...yum... 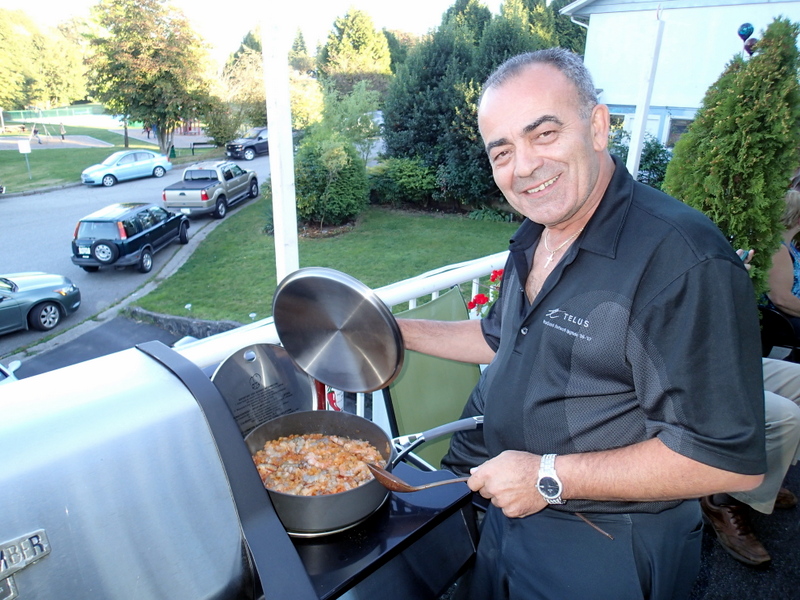 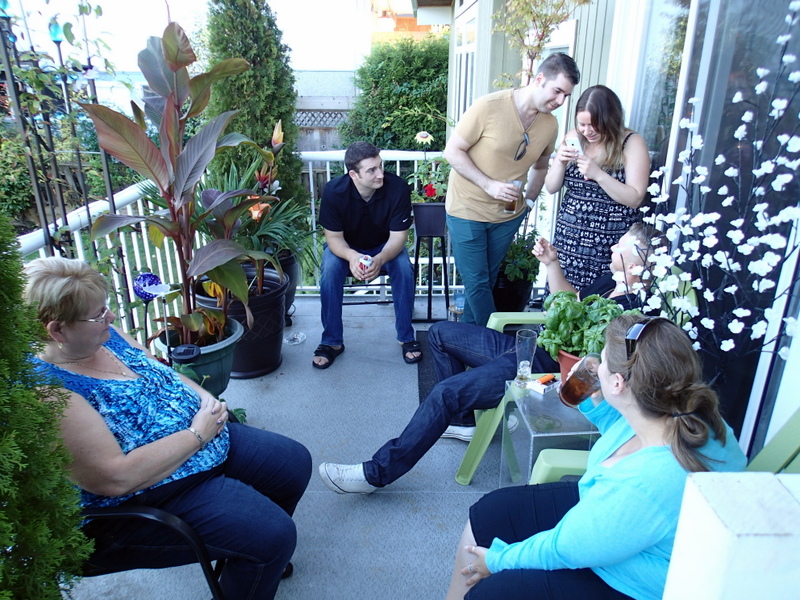 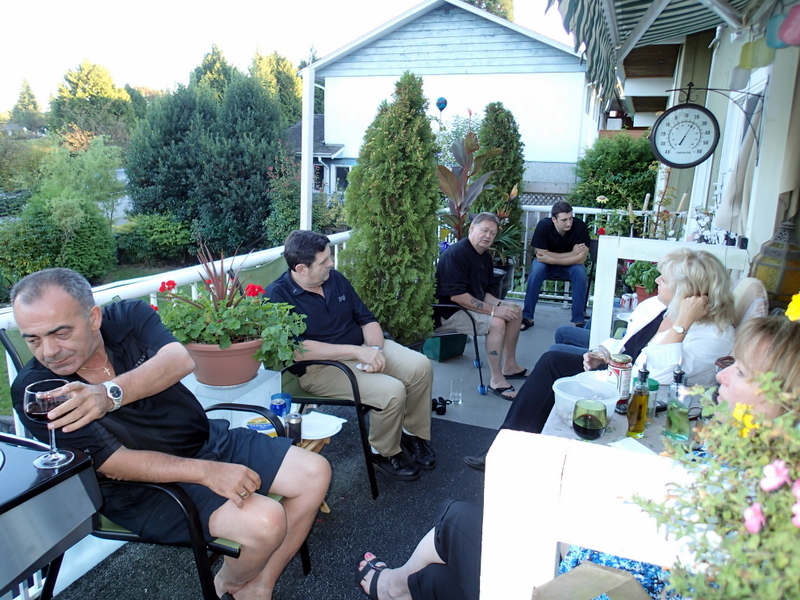 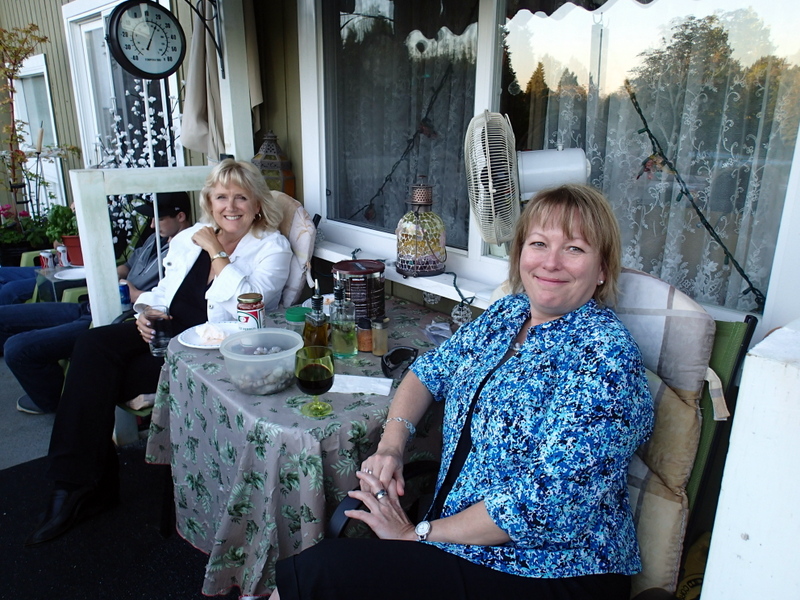 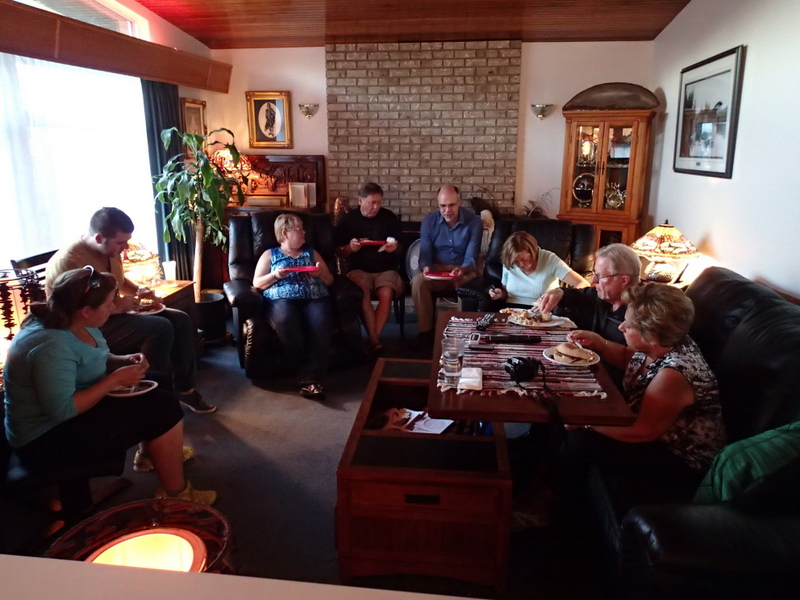 After a lovely afternoon, we headed off...I was exhausted (I wasn't very lively today...haha!) We dropped Esther's son, Doug, off in New Westminster and arrived back home in Fort Langley at about 8:30. We unpacked and were in bed with lights off at 9:30!

Monday was back to cloud and rain. How lucky is that?  Rain Friday...beautiful weather for the wedding, Saturday and Sunday...then back to rain Monday.

We met our friends Ray and Deb at the Big Ridge Brewing Company for an early lunch. Burger and a beer for $11.00. We were waiting when they opened the doors at 11:30  They took their motorhome in bright and early this morning for servicing...hope all goes well and you get your home back by the end of the day! We enjoyed chatting and catching up with them.

We were back home just after 1:00...plenty of time for Steve to get to his doctor's appointment. (The doctor was an hour and 40 minutes late.) I grabbed the overnight bag that I had packed this morning and headed off into Vancouver. I am taking Chris's car back to him and then spending the night with my friend, Glenna. We are having another night "away" at her mom's place in Burnaby since her mom is away.

I arrived early at Chris and Angela's and was able to spend some time with them...bonus! They were in the middle of setting up their new espresso maker...a wedding gift from Angela's brothers. They got it all set up and I had the very first cup of espresso they made! This picture is really deceiving...the cups are actually small espresso cups but look much bigger because of the angle, I guess. 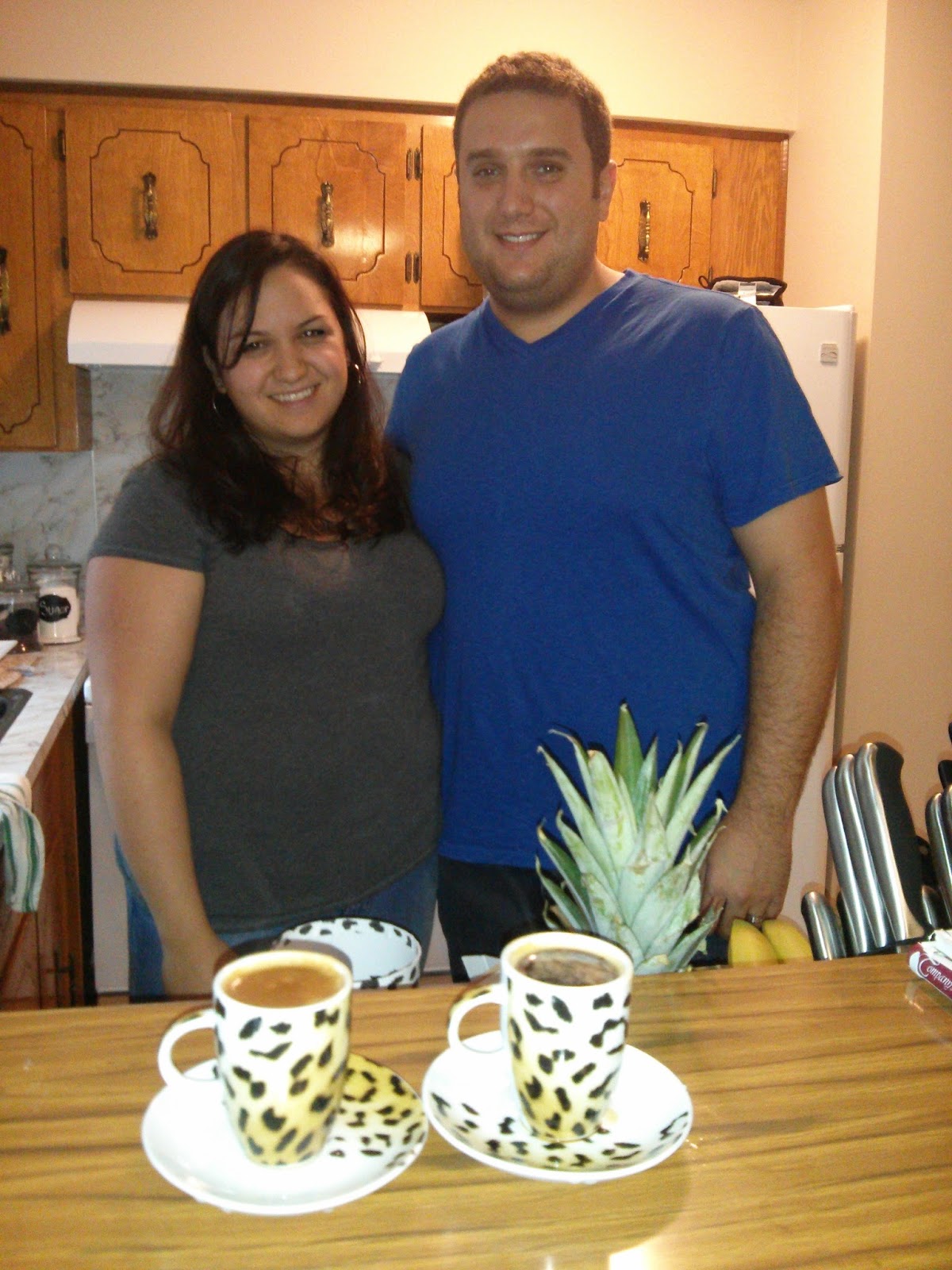 They dropped me off at Glenna's mom's place at 5:00. Glenna and I had a great time catching  up...we drank wine, went out for dinner...and drank more wine!

On Tuesday we went to a cafe just down the street for coffee and a bite to eat and then we wandered along Hastings checking out a few shops. After we were finished there, we thought we would drive out to Willowbrook Mall in Langley. We checked things out there and then headed out to Fort Langley.

It was after 2:00 when we got to the campground. Dave and Kerry were there...having stopped for a final visit with Steve before heading east on their trek home to Manitoba. We all had a quick visit and then Glenna headed back into Coquitlam and Dave and Kerry were off to Salmon Arm...the first stop on their way home.

It has been so great seeing everyone over the past six days...lots of family and friends! Now it is time to get to work...we plan on leaving next Monday and have a million and one things to get done before then!

Posted by Dianne and Steve at 9:33 PM