I was sound asleep when Steve’s watch alarm started beeping at 6:00 a.m. Whoa...it’s been a long time since I was awoken by an alarm clock! We wanted to get on the road early this morning so we could get to Suncoast RV and have the work on the 5th wheel finished up as soon as possible.

As it was, we didn’t pull out of the RV park until just after 8:30...about a half hour later than we had hoped to. Some people think nothing of stopping by for a chit chat when you’re trying to set up or packing up to leave. The route we had planned to take was fairly direct—south on I-95 then east on SR-50...quite contrary to the route Serena wanted us to take. I had noticed an exit off the I-95 for State Route 50 and since Suncoast RV is on SR-50, I figured we could just get on it and it would take us there. That way we could eliminate all those annoying Toll Booth stops...not to mention save some $$. I also checked googlemaps just to ensure it went right through. It got us there but it was funny because right up to about the last 5 miles before Suncoast RV, Serena was still trying to direct us over to the toll highways.

It was about 10:15 a.m. when we arrived at Suncoast RV and of course, the technician that was to work on our trailer was working on another one...he would get to ours once he was finished on it. So, I sat down in the waiting room and pulled out my laptop...I still had lots of work to do on our journal. Steve turned on the TV and watched CNN news...this had the makings of a long day. CNN was reporting that 49 of 50 states had snow...including Hawaii! Florida was the only snow free state but still it was cold in the mornings.

Suncoast RV is not located in an area where there are lots of restaurants or shopping areas (unfortunately) and there is some major road construction happening out front. So as our stomachs started to growl, we asked if there was any place within walking distance that we could go get some lunch. A Mexican place just down the road was recommended and off we went. Other than the basic tacos and fajitas, we really have no knowledge of Mexican food...so what to order? When we went out for a Mexican dinner in Toronto with Garth, Donna and their daughter and son-in-law, Steve had ordered either burritos or chimichangas (cool word...don’t know if it is spelled right though) and he really liked whichever one it was. So he ordered the chimichangas...nope, it must have been the burrito that he had. We realized it was the chimichangas that weren’t popular at our table when we were in Toronto.

Well, the afternoon dragged on and on as we sat waiting for our rig to be finished. At 3:00 I decided I had better call the State Park and let them know we would be arriving late. She gave me the code for the gate and said that there would be a map taped to the park office window. One thing we absolutely hate to do is arrive at a new camp spot in the dark. Unfortunately, circumstances made it out of our control.

The technician, George, was really good and spoke at length to Steve about the 5th wheel. Unfortunately, the new brake module that he installed did not work so he had to take it out and re-install the old one. The old module itself works; it’s just the display that doesn’t. The Hensley rep will be at the Tampa RV show, so we will take it back to him and figure out what to do. Gee...some things just can’t go smoothly, can they?

We finally pulled out of the Suncoast RV lot just after 5:00 p.m....Serena’s ETA at Hillsborough River State Park was 6:40 p.m. 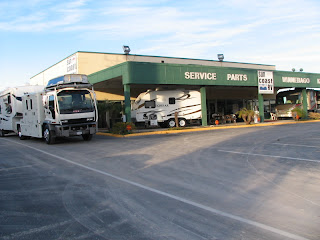 Yup, we would be arriving and setting up in the dark...and it wasn’t a pull-through site either. The sunset was spectacular as we drove southwest on I-4.... 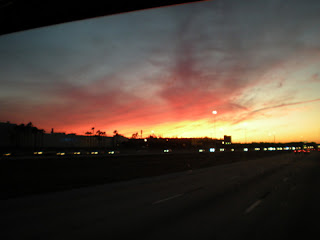 We found the park entrance just as another vehicle was opening up the gate, so we followed him into the park. As promised, a map was taped to the office window and in we went to find site #2. Well, this is a huge park with lots of trails and day-use areas so we seemed to drive forever before we finally found the entrance to the actual campground. Our site was at kind of a funny angle so we would have to back into it making a fairly sharp left turn. But Steve did a fabulous job and we actually managed to get it backed in to exactly where he wanted it with little difficulty...YAY!

It was close to 8:00 by the time we got everything all squared away inside and out. Obviously we weren’t going to try to set up the satellite dish tonight...that would probably have to wait until Friday since we would likely be at the RV Show in Tampa all day tomorrow. I kept my fingers crossed as I plugged in my Rocket Stick and fired up my laptop....are we going to get a signal??? YES! Ahhhh....life is good!

We had a light dinner, watched some pre-taped TV shows and headed to bed. We will have to be up early again tomorrow because we want to get to the RV Show when it opens at 9:00 a.m.
Posted by Dianne and Steve at 8:03 AM