The sky was blue...the sun was shining...it is going to be a beautiful day! We are back in shorts and sandals...YAY! Yesterday was a nice day but today’s forecast is for warmer temps of 72F/22C.

It was just before 11:30 when we headed out...we are going to take a drive through Crystal River. Rock Crusher Canyon is on the outskirts of Crystal River and so far we have only been the few miles south to Homosassa Springs (which we passed through on our way north). There seems to be more plaza-type shopping areas rather than a downtown core...but then Crystal River is a pretty small community. 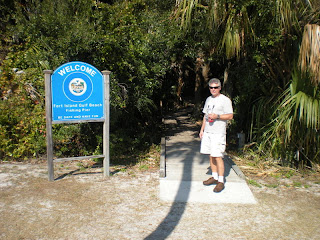 After that we headed east towards the Gulf of Mexico and Fort Island Beach. It`s about 9 miles through salt marshes and canals. The beach is beautiful...unfortunately there are so many birds that to walk along the water’s edge means dodging a lot of bird poop. We started off by taking a walk to the fiishing pier. Apparently fishing wasn’t that great but the folks were enjoying the sunshine.
This is the boardwalk that goes to the fishing pier... 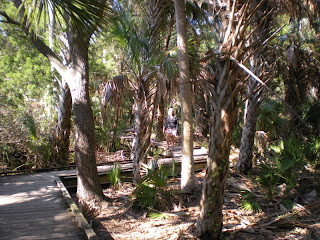 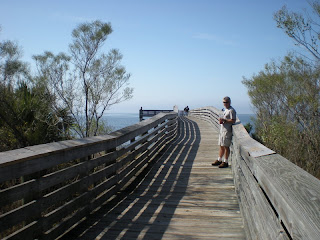 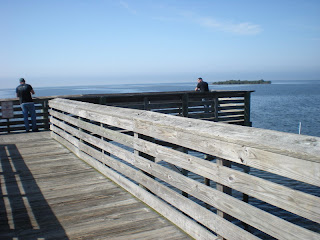 We walked to both ends of the beach and took lots of pictures... 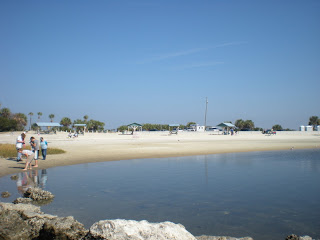 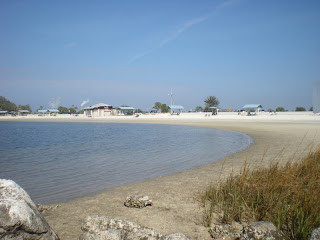 This is the fishing pier taken from the beach... 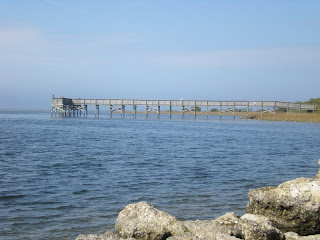 Just as we were finishing our walk along the beach, fog rolled in...wow, good thing we got here when we did! 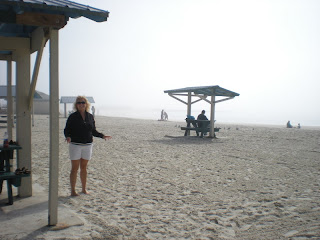 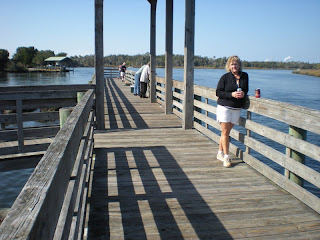 On the way back, we stopped at Fort Island Park and boat launch where there was another fishing pier. Right beside it is a community of townhouses...pretty nice right on the waterfront. I also noticed that a lot of the homes are on canals that have docks with their boats moored. 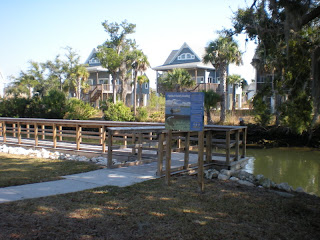 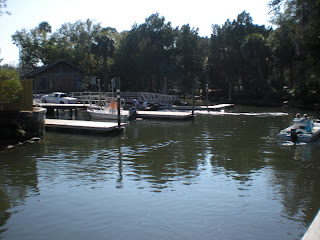 After stopping at Ace Hardware for some silicone sealant that Steve needs to seal some leaks we continued home. As a rule we try not to travel in the rain, however it was raining the day we drove here and during our set up Steve found a couple of inches of water sitting in a pail in the lower side storage compartment of the truck. Directly above the pail is a 6 inch square plate that wasn’t sealed. We had always thought that the water was coming into the compartment from a bad seal on the side doors. We have also had ongoing problem leaks since the truck was built from the two front vents on the ATV garage that has stained the interior front wall. ITB the truck body builder had the truck returned to them twice for deficiencies before we left on our adventure......and of course we didn’t realize we still had a leak until we were long gone. We will be seeing them in April! Steve also re sealed some of the framework around three storage doors on the 5th wheel where the old sealant had pulled away.

After dinner we went out for our usual walk around the campground. This time we took the camera and took pictures of the “light show” some of the RVs have...some really go all out! Unfortunately, the pictures didn’t turn out so we will try a different setting on the camera tomorrow night.

As we were walking along, it started to sprinkle out...hmmm...shall we go back now? Nah...so we finished but just after we got back, it started to just pour out! It doesn’t fool around when it rains here...no wonder there are drainage basins all over the place.

We also experienced something that has never happened before...the rain was so heavy and the cloud cover so thick that we lost our satellite signal. At first we thought that the dish just needed to be repositioned but that didn’t work...however, as the storm passed, the signal returned. Well, it returned until the next storm came through. This time there was thunder and lightning along with the rain....quite a storm.

I believe the forecast is for a rainy day tomorrow...so we might just have to have an "inside" day.