I didn’t sleep well at all last night. For some reason my lower back and hips are bothering me...not sure why but perhaps it could be the bed (we could use a new mattress) or maybe it has been all the walking in the past couple of days (I doubt that because I am used to a lot walking)...or perhaps I just strained it somehow. Whatever it was, I was up at 6:15 this morning.

Shortly after getting up, I heard the light pitter-patter of raindrops on the roof...I guess they had been right about the weather forecast. Well, that light pitter-patter was just the prelude to a major down-pour with thunder and lightning! Holy Cats! We haven’t seen rain like this for a very long time! Our campsite was transformed into a huge puddle of water...and it wasn’t letting up at all.

Needless to say, we were not rushing to get on the road this morning. At one point, Steve thought it would be a good idea to check to see if there was another site in the park that we could move to. But after checking the forecast on the US Weather Service website, we decided to get the heck out of there. A severe weather warning had been issued for the area...severe thunder and lightning with high winds and the possibility of tornados. There are no weather warnings where we are headed...about 2 hours north...so we decided to get the heck out of here.

We got the inside packed up and donned our rain gear and boots to finish up outside and get hitched up to the truck. Man-oh-man, it was just pouring! Too bad I didn’t get any pictures...but my camera was about the last thing on my mind at the time.

We were on the road at about 11:30 a.m. ...in the driving rain. Fortunately, it started to lighten up as we headed north. By the time we arrived at Rock Crusher Canyon RV Park, the rain had stopped and there even bits of blue sky showing through the clouds. The fellow manning the gate, Bud, gave us some suggested sites that would be good for satellite reception and we went for a short walk to have a look. Joyce, the reservation person, was just off at lunch and would be back in 15 minutes. We picked one that we liked but when Joyce returned, we found out that that site was already taken. So Bud took us out on the golf cart to take a look at some other options. It’s a big park with 400 sites but they are well spaced with lots of vegetation providing some privacy. 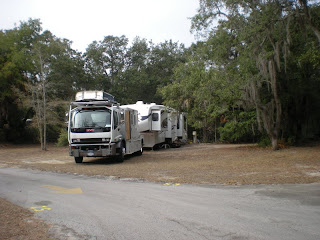 We chose site #51 and after getting registered, we manoeuvred the rig through the gates and to our site. It’s a large open site and Steve had no problem backing in. We got unhitched and Steve worked outside getting all set up while I decided to give the trailer a good vacuuming before unpacking the inside.

Okay...now it’s time to set up the satellite dish...will we be able to get a signal? After a few tense moments, the bar went green and the numbers went up...YAY! But it’s very finicky...the dish has to be pointed in exactly the right spot. Any slight movement and the signal strength goes down. Let’s hope it doesn’t get too windy out! 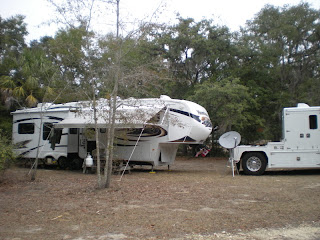 With our work all done, Steve set up our chairs and we sat outside for bit. It wasn’t sunny out but it was warm and pleasant. This seems like a very active park...lots of activities to partake in if you wish. Also lots of friendly folks out walking and of course ....wanting to know about the truck...Steve met lots of them while trying to get set up.

We had a fairly early dinner since we hadn't had lunch and then we settled in to watch TV for the evening. It was so warm that we actually had to leave the door open...wow, that hasn’t happened for quite awhile.
Posted by Dianne and Steve at 5:40 PM