We were on the road just after 9:30 this morning. It started off as a bright, sunny day but a high cloud covering soon took over. But it was still a lovely day for travel.

At first Serena wanted us to head north and take Interstate 10 west but I coaxed her into letting us take Highway 98 west instead. The route took us along the coast but for a good part of it, we couldn’t see the water...instead we were teased with signs telling us to turn left to the beach areas. The area from Panama City Beach to Destin through to Gulf Breeze is dotted with community after community along the coastline. Panama City Beach (which is different from Panama City) and Destin look like major tourist areas and must be absolutely hopping in the summer months. These areas will definitely be on our list of areas to explore the next time we are in the area!

At one point we thought something was wrong with Serena...she said that we would be arriving at our destination in 5 minutes but we still had over 40 miles to go. What the heck was going on? We were stymied...then I wondered...did we go through a time zone change? Sure enough after checking the road atlas map that showed all of the time zones, we had gained an hour as we headed west. Obviously Serena was much smarter than us! Too funny! 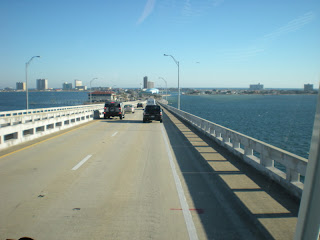 One thing Steve and I have both commented on are all the bridges they have down here in the States. When we were going through the Beaufort and Savannah areas, there were huge bridges over salt marshes connecting all of the offshore islands. There was a huge bridge over to St. George Island and then across the inlet over to Apalachicola. And now...another one over to Pensacola Beach and the Gulf Island National Seashore to Fort Pickens.
The water is a beautiful shade of bluey-green... 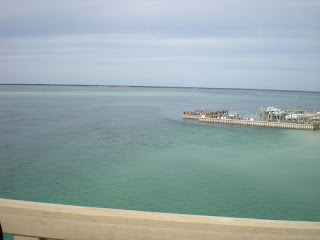 WOW! The beach is just beautiful! The sand is so white! 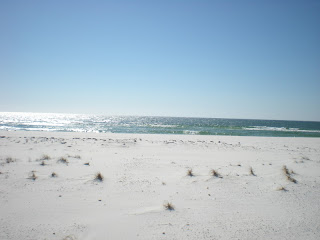 We were really surprised by the population on the island...I thought the whole island was a national park. Pensacola Beach is obviously the `go to` place in the summer time. Luxury homes, high-rise condo buildings and townhouse complexes along with all the shops and restaurants greet you as you enter the island. 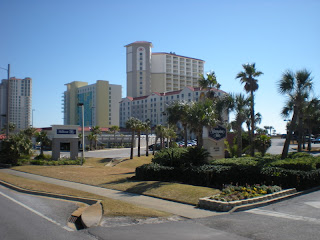 We followed Fort Pickens Road to the right that goes west along the long narrow island. We paid the $8 park entrance fee (good for 7 days) and continued on for what seemed miles and miles before we finally came to Loop A of the campground. It was a smaller loop and was quite treed...apparently it had not been hit as hard by "the hurricane" (Katrina, I think) as the rest of the campground. During the winter season, the campground only has self-registration where you go through, pick your site and then pay at the kiosk. After checking out the sites in loop A, we continued onto the main or bigger part of the campground (loops B, C, D and E). We were not particularly impressed with any of those sites...oh well, we have to pick one. We decided against loop A even though the sites are larger, opting for a less treed site in loop C so that we had full sunshine all day. All the sites in the campground have been newly paved but why they could not have added a couple of extra feet is beyond us...there is plenty of room. We chose site C33 and after manoeuvring back into it, we got all set up. We had no problem getting a satellite signal and it also looks like I may have a better internet signal too...YAY!
Posted by Dianne and Steve at 2:08 PM