It was so nice to have  relaxing day today...we had a leisurely start with our coffee and then showered and I cooked us a big breakfast. There was a dense fog advisory on until about 11:00...and a look outside confirmed that it was indeed socked right in! But that was okay...Steve planned to work on picture editing until about that time anyway.

We headed out shortly after 11:00...the fog had dissipated and it was a lovely sunny day. We needed to go to a Verizon store to put money on our account and to suspend the MiFi...we'll just use the data on the cell phone for our final week in the US. I had found a Verizon store in Eugene and as we drove into the strip-mall where it was located, Steve was happy to see a Sports Clips shop. So after finding a parking spot a little ways down the road, Steve went in to get his haircut while I took care of Verizon.

We were home a couple of hours later, had a bite to eat for lunch...and then Steve settled in for more picture editing while I read my book. A nice relaxing afternoon.


Monday (Mar. 25) I was up bright and early...I couldn't sleep and besides, I wanted some "coffee" time before we had to pack up and get ready for our 8 a.m. appointment. The reason for stopping at Guaranty on our way north is to have our big slide looked at again...we weren't really happy with the repair job that Duncan RV had done in Elkhart.

Other than going out for lunch, we basically spent our day in the waiting room at Guaranty RV Service...Steve worked on picture editing and I read my book. It was back to being rainy and gloomy out.

Around 2:00, Josh, our Service Assistant, came in to tell us that the tech working on the trailer slide had found that the gear packs on both sides of the slide had missing teeth. They can have replacements here tomorrow. The tech had also replaced the rubber seal under the kitchen slide. It had been replaced in Elkhart but within a few days Steve noticed it had a chunk missing out of the middle again just like the old one did. Our tech said it wasn't put on straight...geez! This is why we hate having repairs done on the road...you're no longer near that repair facility so you can't take it back so have to pay to have it done again! Rather than move the trailer back over to the holding lot, we can stay in the trailer where it is parked now...outside the bay door.

So Steve put on his rain gear and walked over to where we had been parked to gather our chocks and water hose, etc. while I went to set up the inside of the trailer. We would have power and didn't need to hook up to water as we had enough in our tank.

We spent the rest of the afternoon and evening inside the trailer while it poured outside...I worked on a blog update while Steve watched TV.

We spent all Tuesday (Mar. 26) morning in the trailer waiting for the parts to be delivered. Again, Steve worked on picture editing and I read my book.

Just before noon, Josh came out to let us know that the parts had arrived and that the tech would get started working on it right after lunch. So we packed up and went back into the waiting area, where we spent the afternoon. This is the first time we've had a female tech...nice to see them getting into the trade. 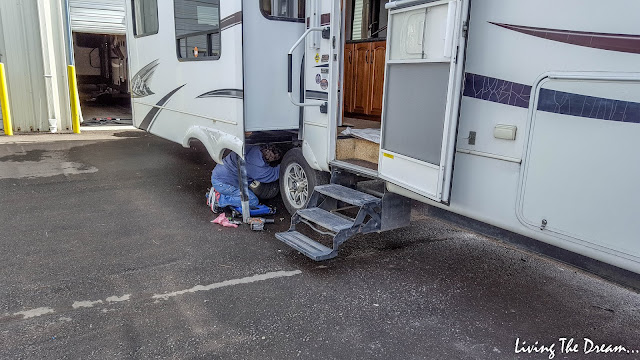 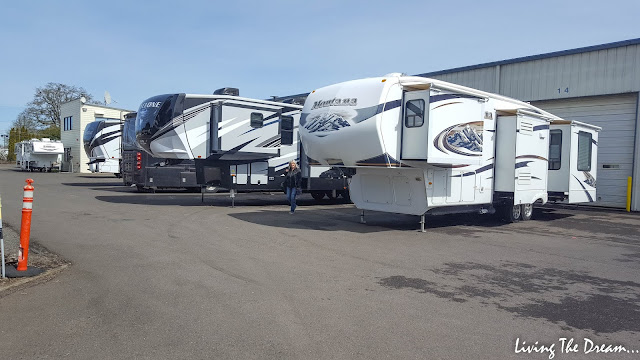 Wednesday (Mar. 27) we were up and out by 8:00...and sitting in the waiting room. Steve decided to walk over to the trailer and found our tech, service manager and Dave discussing our situation. He explained the mechanics of the slide room and how adjustments are made and felt if they tried to straighten it any further we would most likely start loosing some teeth on those new gear packs. Well that sucks...we had been so hopeful! So we decided to have them put the additional seals back inside the one end of the slide room to cover the gap. Other than new gear packs we're no further ahead! We never thought to contact the manufacturer Lippert when we were in Elkhart to see if they serviced their own products.

It was about 10:30 when it was all finished and they towed the rig back to a spot across the street. I did a minimal set up inside while Steve "hooked us up" outside. And then we gathered all of the laundry and headed the short distance down the road to the Guaranty RV Travel Center. They also have a full RV Park, store and restaurant there now too. I put the laundry on and then we had lunch there.

Once the laundry was done, we dropped the bags off at the trailer and then headed to Safeway for a few groceries. On our way home, we filled up with diesel ($3.00/gal)...so we are good to go in the morning.

There are train tracks right down the middle of this street...and yes, the train still runs on them! 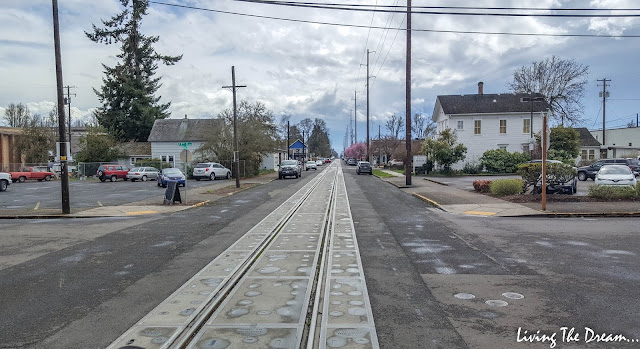 Back home, I made up the bed and put the laundry away and then relaxed. The evening was topped off by fresh pizza from Safeway that I just had to throw in the oven..and then we settled in to watch Survivor! 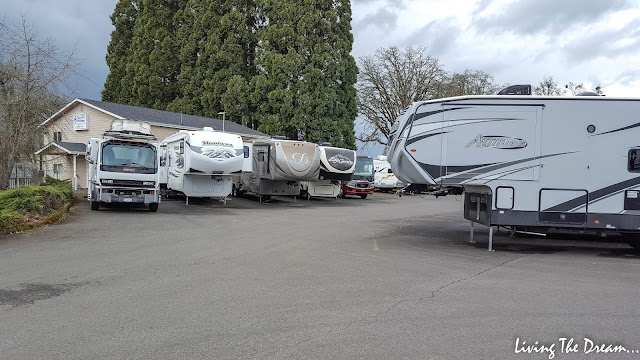 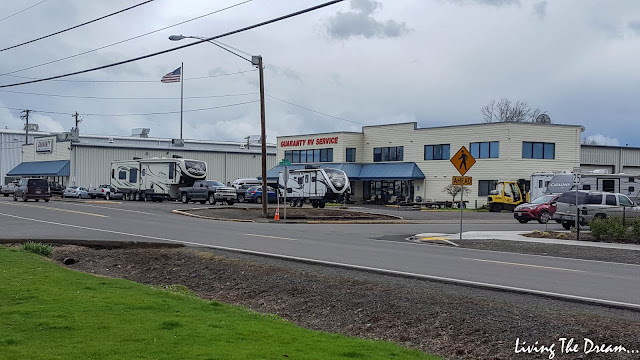 We're looking forward to getting on the road again tomorrow! Next stop...a visit with friends that we met in Q!

Posted by Dianne and Steve at 8:12 AM