Monday was another beautiful day...with just light wispy clouds and a slight breeze. I got out for a short walk...only managing 1.33 miles.  Steve joined Earl in the desert behind us flying their RC planes.

After an hour or so, Steve was back and settled in to work on picture editing while I took care of a bunch of small things on the phone...managing to change my appointment with my orthopaedic surgeon (my left knee is bad) from May 10 to April 5, just after we get back to Victoria. I also made appointments for us to see our GP. Getting appointments all lined up for when we get back to BC.

After lunch, Steve "pumped and dumped" the holding tanks and I sat outside in the sunshine knitting. And that was pretty much our day.

Tuesday morning Steve and Earl were out early taking advantage of the calm morning, taking their planes out back to fly. At 10:00 Steve was back...I looked out the screen door and there he was standing with a sad look on his face. He had crashed his beloved plane. Shortly after arriving here he stopped flying in beginner mode and has been flying in experienced mode and learning to do loops, stalls, spins and rolls. Apparently he got a little too close to the ground and tried to switch back to beginner mode which is suppose to immediately right the plane with it's on board gyros but it didn't engage in time. Steve always said this day would come for him as most RC pilots he's met admit to at least one crash. Meanwhile Earl is doing well learning to fly his new plane in beginner mode, cautiously practising circuits and landings. 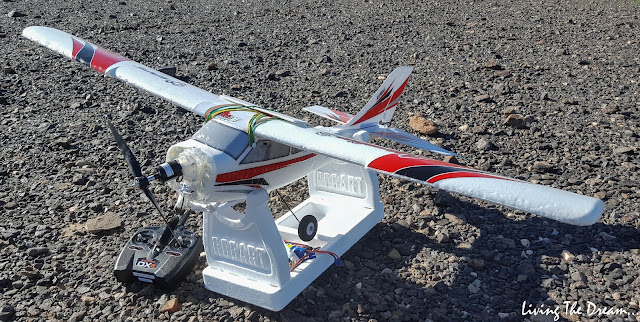 Shortly after 10:00 we all piled into Dave and Leslie's truck and headed off to Castle Dome Mine Museum and Ghost Town. It was (another) beautiful hot day, with a nice breeze to keep things cooler. We passed the border patrol blimp...it is just starting to lift off... 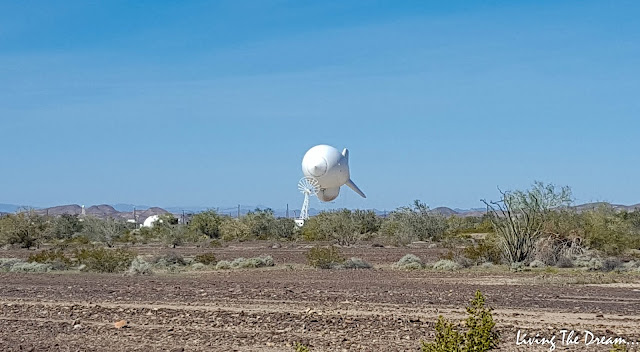 Because we've been here before Steve only took a couple of pictures...that's me, Dave and Leslie in the distance... 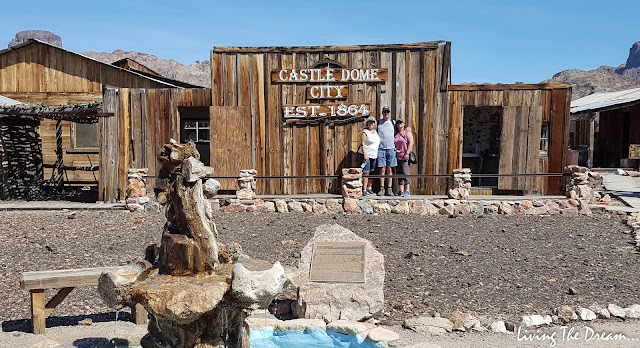 This was our second time to the Ghost Town but it's pretty cool and thought Dave and Leslie would enjoy seeing it. For more pictures and a look at our first time here, click on this link...you'll have to scroll down a bit to Thursday, January 14, 2016.

On our way home, we stopped at Roadrunner in Quartzsite to pick up some hot dogs and buns...we're having a wienie-roast tonight!

Everyone gathered in the shade behind our place for happy hour. Dale and Ruth joined the gang...they are finally here after a long wait for repairs on their fifth-wheel and truck.
Left to right, around the circle...Steve, Dale, Ruth, Red (Pam is still in Phoenix), Mike, Dawne, Cindi (Roger's away working) Dave, Leslie, Allison and Earl... 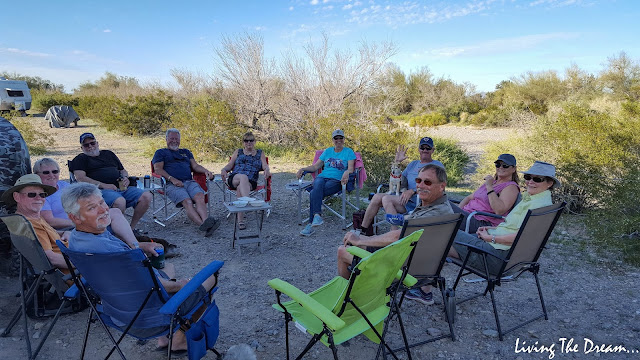 At about 6:00, we all moved over to the fire ring to get a campfire going. And soon, the fire was ready and it was time to cook dinner! 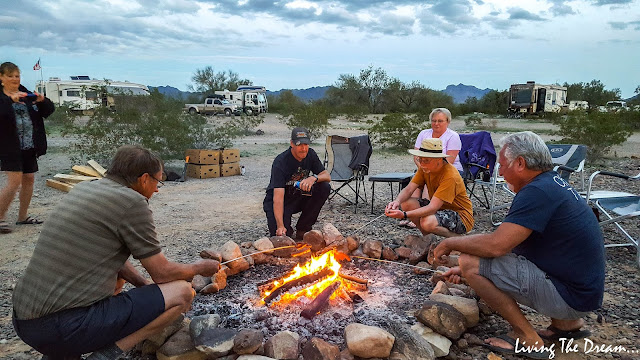 Colan talking with Red, Deb's back, Steve, Leslie, Gary's back (Deb and Gary are friends of Mike and Dawne's...didn't get very good pictures of them, just their backs!), Allison with Marilyn on the other side of her... 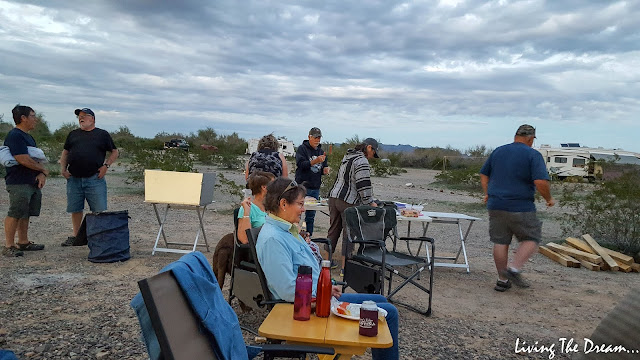 We had a very mild night last night, waking up Wednesday morning to 66F/19C outside and 69F/20C inside...but we could also hear a few sprinkles of rain on the roof and the wind was starting up.

However, the day turned out to be mainly sunny and hot with the temperature going up to 81F/27C...but by mid morning, the wind had started and it was a very blustery wind from the south forcing us to close the door in an attempt to keep the dust out.

I cleaned the inside of the refrigerator...the drip tray that catches water had filled up and I guess the plug that drains outside must have plugged because it overflowed inside. We are keeping a close watch on the fridge. It seems to go along fine and then goes into a defrost cycle where the frost on the fins melt and we have a hard time keeping the temperature down. It's going through that now. We've gone from the temperature inside being 37F at a setting of 3 to 42F at a setting of 8! We will continue to monitor it.

Steve, Earl and Red went to the hanger. Steve and Red wanted to repair their planes with help from the experienced plane fixer Jim. Jim had an unfortunate incident with a propeller on a gas plane he was working on the other day so now has stitches and a bandaged arm. Jim confirmed Steve's plane was repairable so Steve started removing the broken parts while they worked on Red's plane. Yay... cheaper than having to buy a whole new plane! Steve needs to order a new cowling, motor mount, fire wall, battery compartment cover, tail assembly and nose wheel. Jim applied epoxy to the crack in the fuselage and battery compartment then returned to fixing Red's plane. It's fantastic for the guys to learn from, and have the services of, Jim and the use of all the tools and equipment at the hanger... 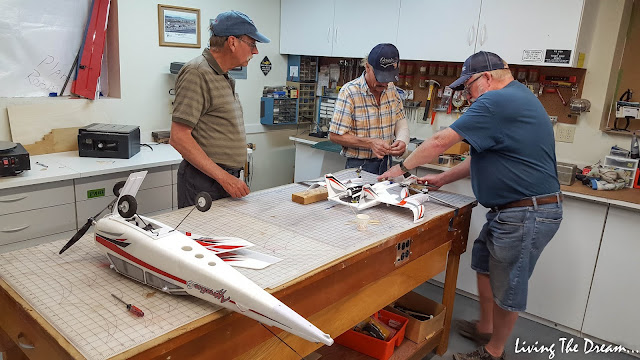 While they were gone, I worked on another blog update and then found some shelter outside in the shade, out of the wind to sit and knit.

And that pretty well sums up the last few days!

Posted by Dianne and Steve at 4:50 PM