It was cold in the trailer when we got up this morning...44F/7C...Brrrrr! We usually leave the heater on low overnight but our smoke detector packed it in yesterday...so no smoke detector means no heater; we didn't want to take any chances!

Looks like a cold snap is settling in over the next week or so...there is a freeze warning for tonight and the daytime highs are only in the mid 50'sF (12C). At least we have clear blue sky and sunshine!

We had an extra lazy morning today...as we waited for it to warm up. By late morning we were ready to head into Quartzsite to run a few errands. We started by going to RV Lifestyles...interesting that in our four years coming to Quartzsite that we have never been there. After looking through their parts and accessories department, we bought a new vent cover to replace the disintegrating one in the bedroom and then continued with our errands...filling our gallon jugs with drinking water, getting propane and finally a stop at Herb's Hardware for a new smoke detector.

Before heading home, we stopped at the vendors on Kuehn Street...more and more are setting up in preparation for the busy couple of months ahead. We had a quick look around and then continued home for turkey sandwiches. We had left Bob and Sue's last night with some leftover turkey, stuffing and cranberry sauce...along with homemade buns...for lunch today. Delicious, thanks Bob and Sue!

After lunch, it was time to get to work. Steve started with the bedroom vent while I did some baking. He had to dismantle the vent starting from the inside... 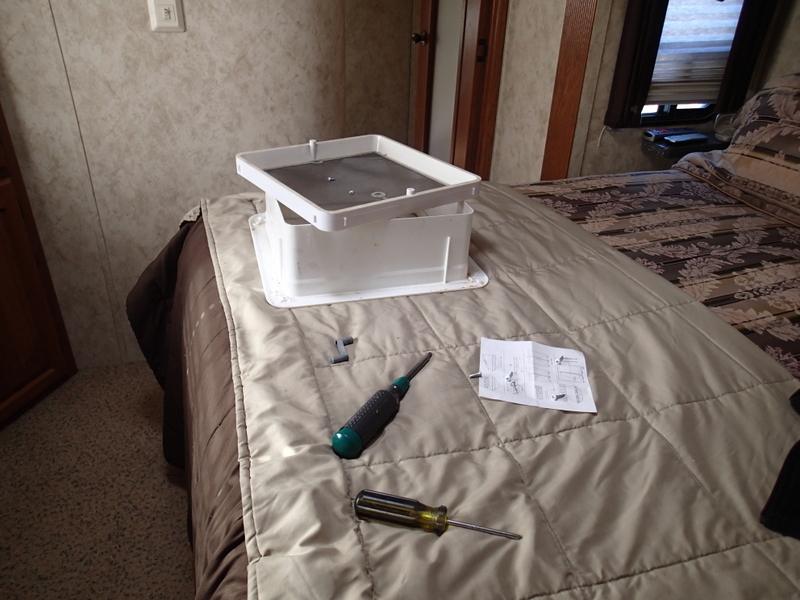 Here's what's left of the old one. It's amazing how brittle it had become considering we have the MaxAir vent cover over it. 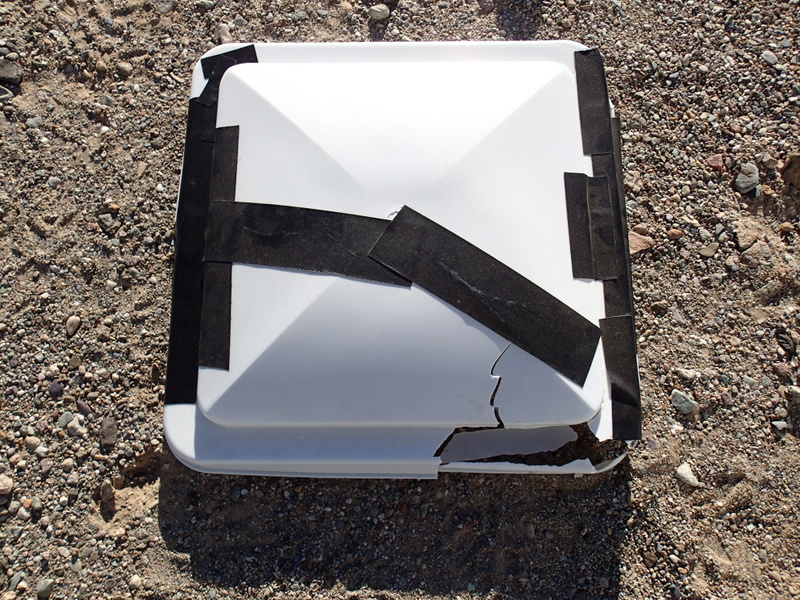 Up on the roof installing the new one... 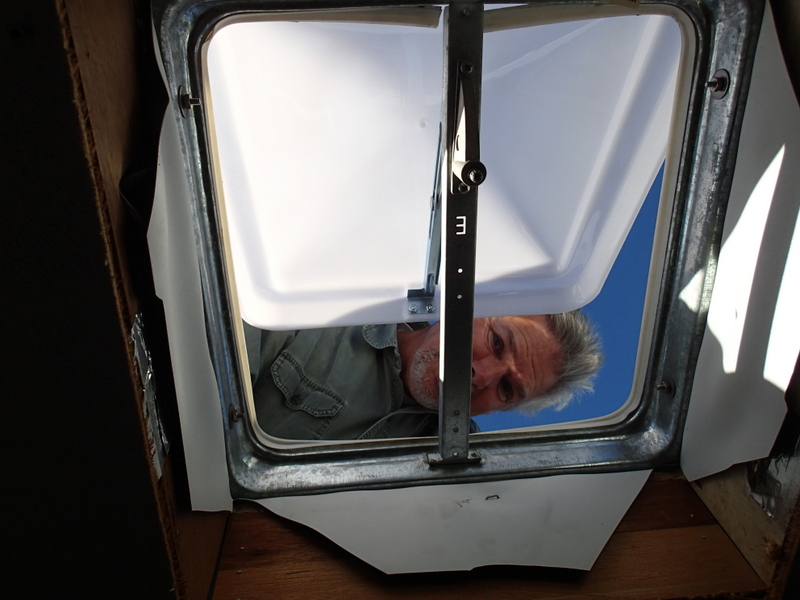 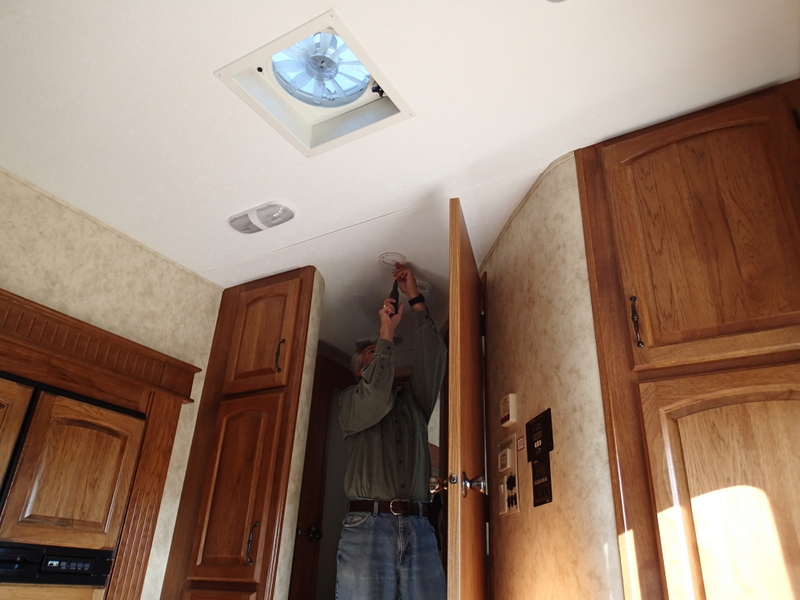 After the new vent cover was installed, it was time to move onto the new smoke detector. Of course all of the new ones we looked at had a larger mounting footprint so Steve had to make another hole in the ceiling. One feature we like about the new detector is the "Hush Button" that silences nuisance alarms for 8 minutes. The old detector alarm was always going off from the dust being burned off our Olympian Wave 8 heater or making toast.

I had to postpone my next baking project because he had taken over the kitchen at this point... 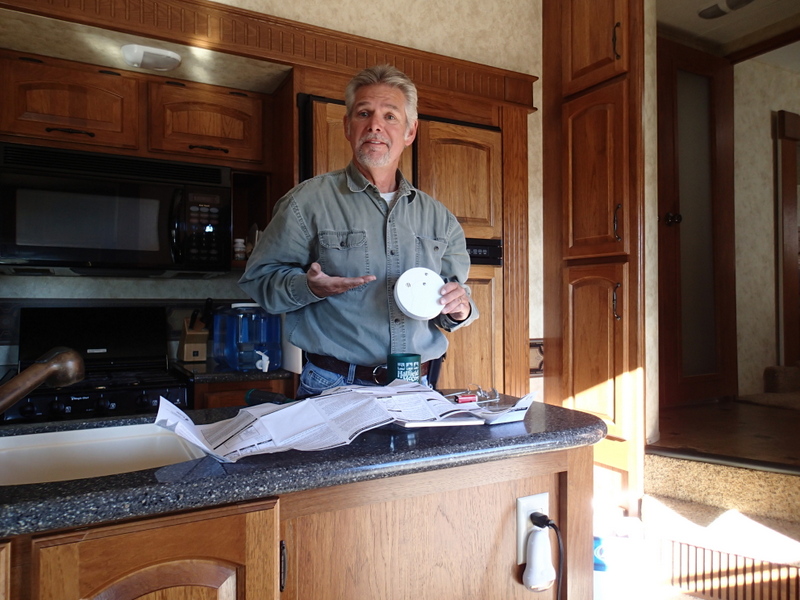 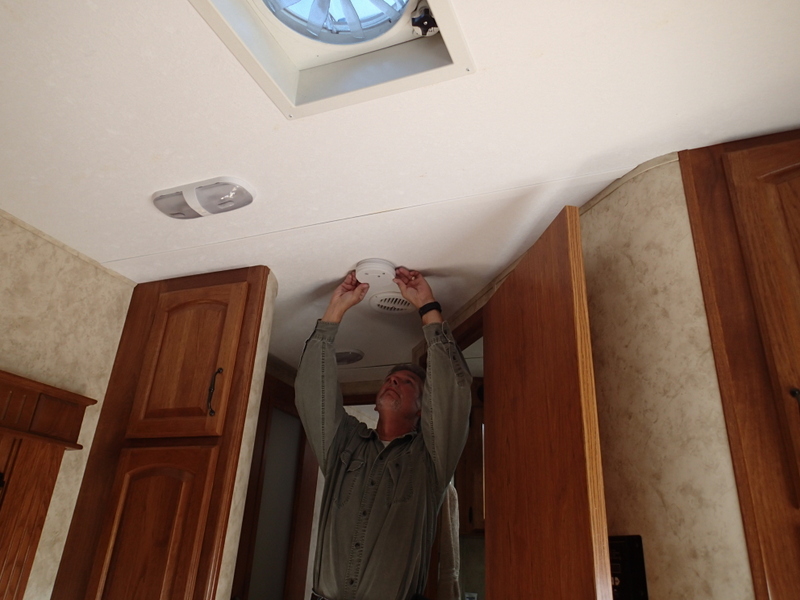 It was going on 4:00 by the time all of the work was done...time to relax in the sunshine with a drink. Although the sky was clear and the sun was shining, it was breezy and not all that warm...so it wasn't long until we retreated inside to enjoy the late afternoon sunshine through all of the windows of our trailer.

We had tacos for dinner (we thought of you, Chris...he loves tacos!) and then settled in front of the TV for the evening...with the heater on!

Happy Boxing Day to all our family and Canadian friends!