We wanted to be on the road by 8:00 this morning so I was up shortly after 5:30 just so that I could at least relax with one cup of coffee before having to get to work. 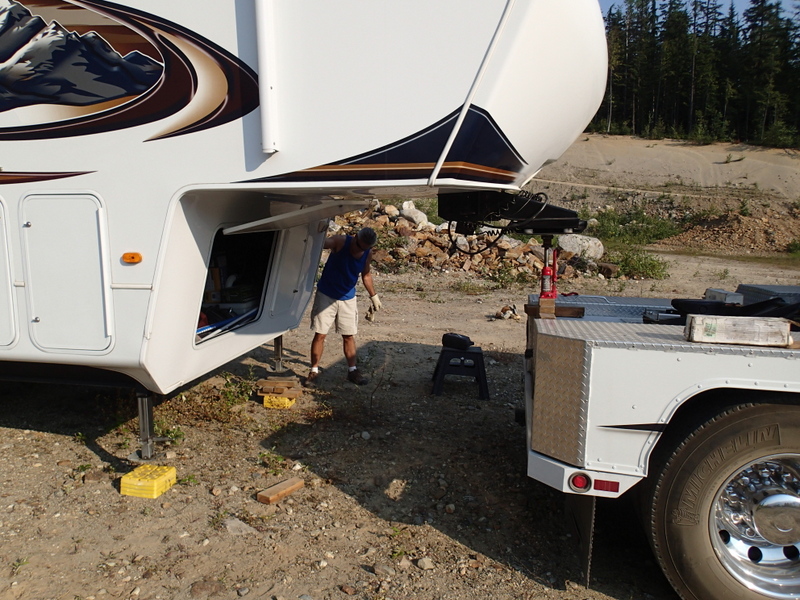 We didn't do too bad...it was shortly after 8:00 by the time we were all packed up and put the slides in...now the last thing to do was to get hitched up. With the front-end jacked up so high and the motor for the jacks acting up, we were weren't sure how it was going to go. First of all, Steve had to use the bottle jack under the kingpin to get it a little higher so that he could take the weight off the jacks so that he could remove some of the blocks under the jacks to get it low enough to be able to get it into the truck hitch. All went well until he tried to take the bottle jack out from under the kingpin and it wouldn't budge. Thankfully, letting air out of the truck's rear air bags dropped it enough to remove it...whew!

All hitched up and with all the wood used for blocking the trailer up, we were all set to leave. It was about 8:40 when we said goodbye to Three Valley Gap and hit Hwy 1 going west. It was incredibly smokey out again this morning and got increasingly thicker as we continued west.... 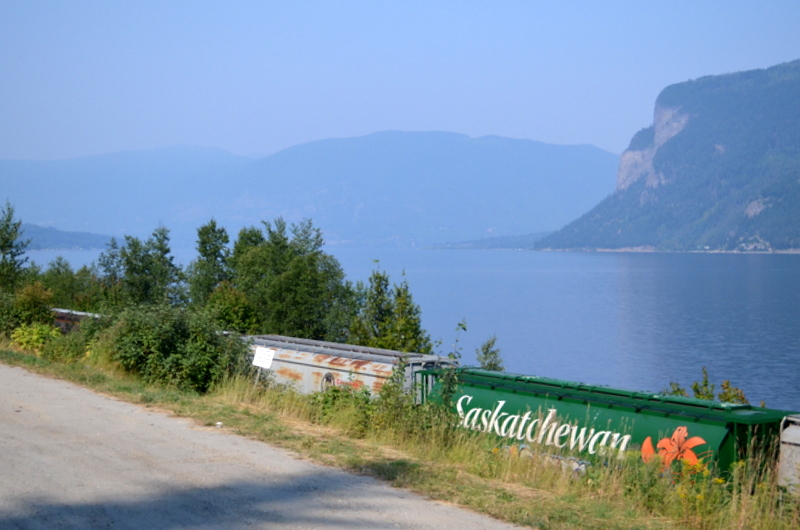 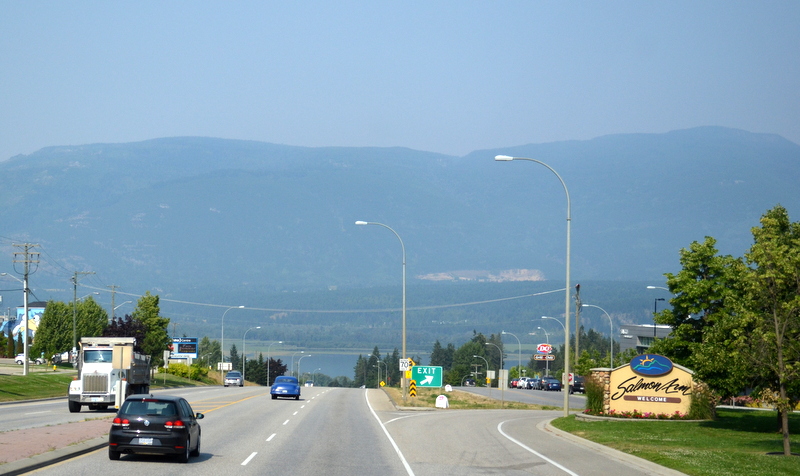 We stopped at the Piccadilly Shopping Centre in Salmon Arm again to use the sani-dump...I also popped into Save-On-Foods again for a few groceries.  Steve also called a local RV repair place to see if they could replace our failing jacks motor. As usual, no one seems to stock parts anymore...we decided we might have better luck in Kamloops.

So about an hour later we were back on the highway continuing west with the address of Fraserway RV punched into Serena (our GPS). 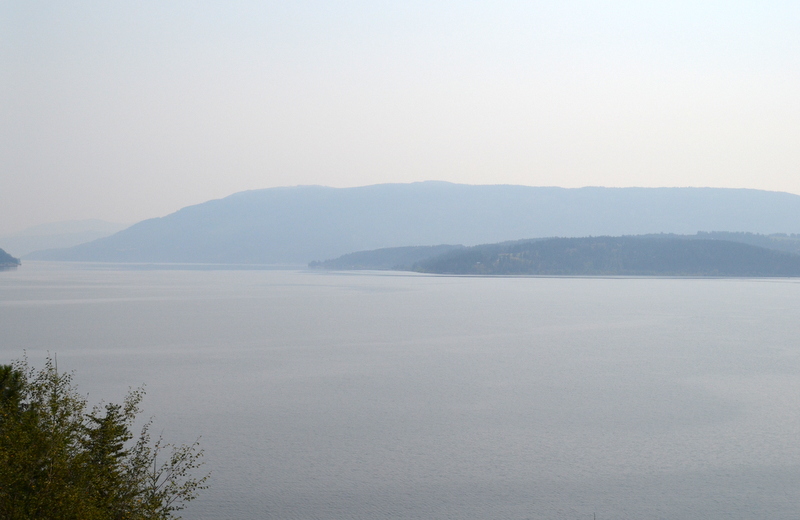 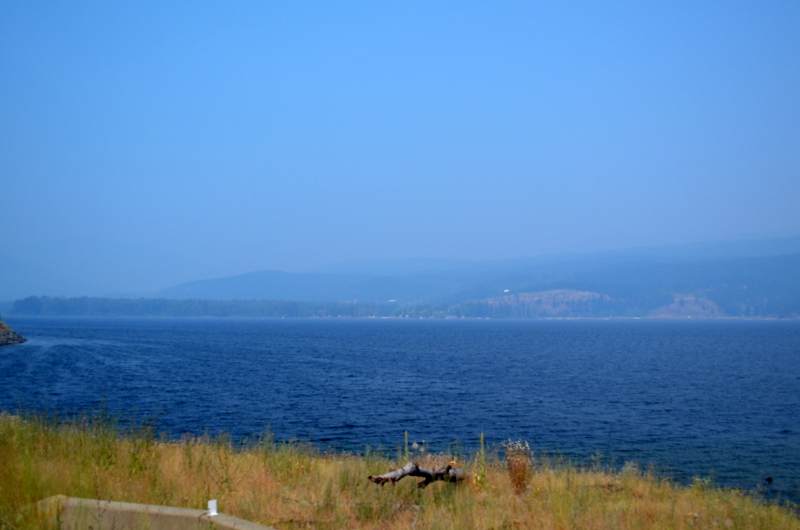 Smoke as we pass through Chase, BC... 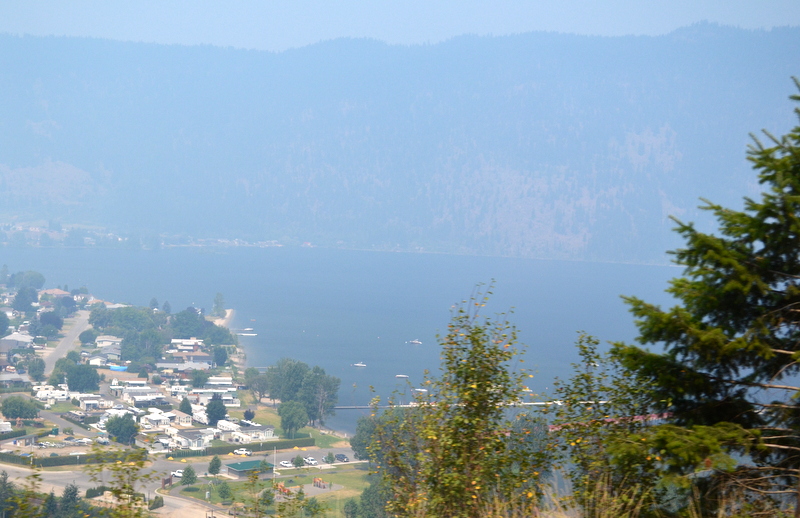 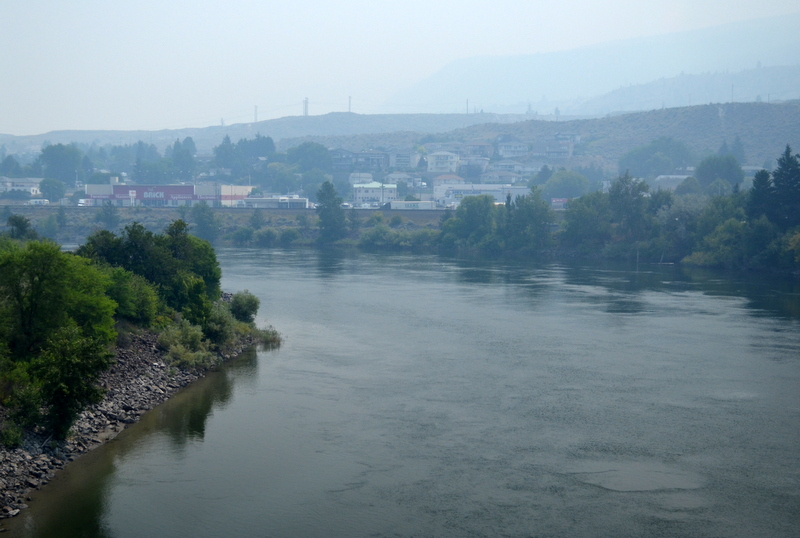 After stopping at a Husky Station in Kamloops to fill up with diesel, we found Fraserway RV (formerly Country RV)....the entrance of which was a gravel slope down into a gravel parking lot. Steve went in to the service department and was told that they are completely booked up until the fall with their "own customers". Not impressed...their head office will be getting an e-mail!

Now we had to figure out how to get out. We couldn't drive through, so I had to direct Steve as he  back up the gravel hill. We managed to get turned around and out of the parking lot. Our next stop was at Jubilee RV on the other side of the highway. At first he suggested we go to Fraserway as they sell Montana's but after Steve told him their response, Peter agreed to take a look. Of course, the jacks worked fine while connected to the truck but he did take all the info needed to order a new motor and Steve would call if we still had problems. 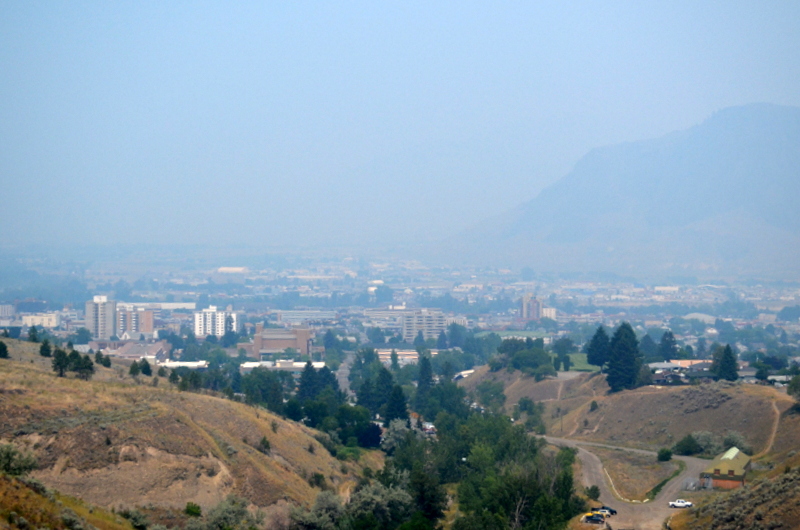 We climbed the long hill out of Kamloops heading south and then took the exit to Hwy 97D towards Logan Lake. The turnoff to Paska Lake is about 15 kms before Logan Lake but we needed to go to the sani-dump to fill up with fresh water first. It was a busy spot...when we arrived there was a fellow in a pickup truck filling a big water container (he was camped at Tunkwa Lake). As we were waiting, a truck and trailer arrived to fill up and shortly after that another truck arrived...all of us there to fill up with fresh water. 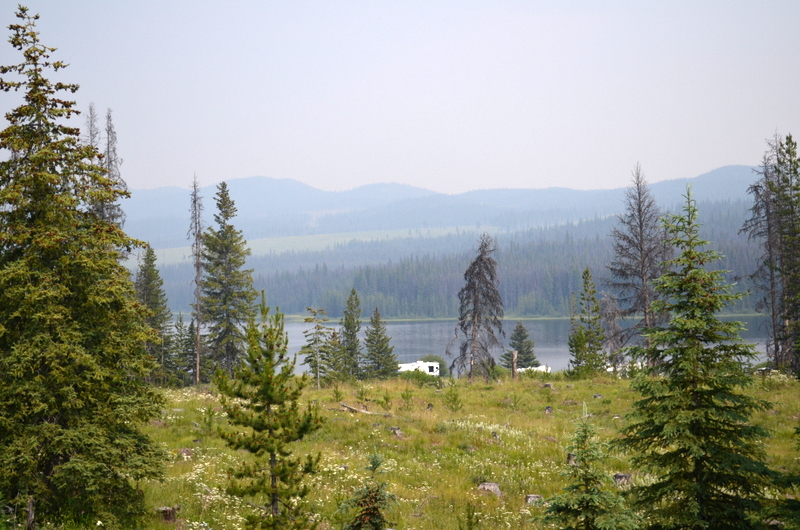 We made our way back to Paska Lake Road and headed north up the windy, hilly...but paved...road. We had no idea how far it was but about 10 minutes later we saw glimpses of a lake through the trees...must be Paska Lake!

Sure enough, we're here! The road into the Rec Site slopes steeply down to the water.... 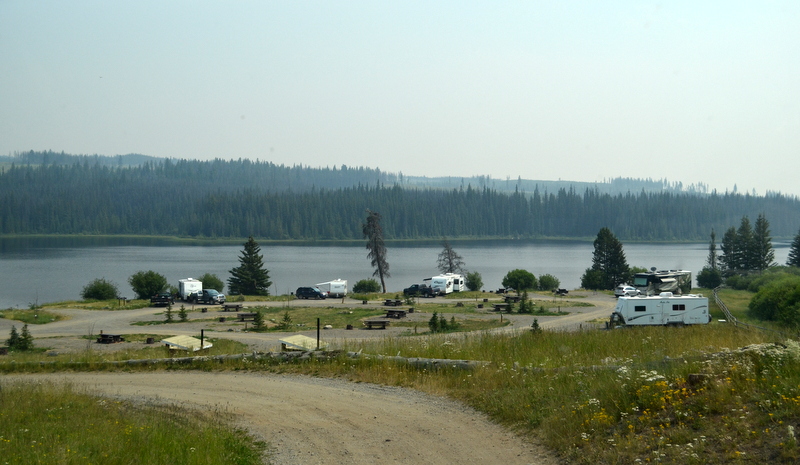 Ray and Deb (they are the couple we met in Fort Langley last spring) saw us coming down the road and came out to greet us. They had saved a lakefront spot for us.

It was an easy back-in from the curve in the road...I like those! Luckily there is a big grassy area behind the parking pad so that we could back up with the trailer wheels to the back edge...that's really the only way we were able to fit into the site.

We were level side-to-side but after unhitching from the truck, the front had to come way down. Of course, that's when the jack motor decided it had had enough...oh well, we were almost level at that point. Mind you, we might have trouble getting back up when it's time to re-hitch to the truck. I guess we will cross that bridge when we come to it. Steve will definitely be calling Peter at Jubilee RV to order in a new motor. We were all set up, including satellite dish, in about an hour...and then joined Deb and Ray down at the water for happy hour. It was great catching up with them! 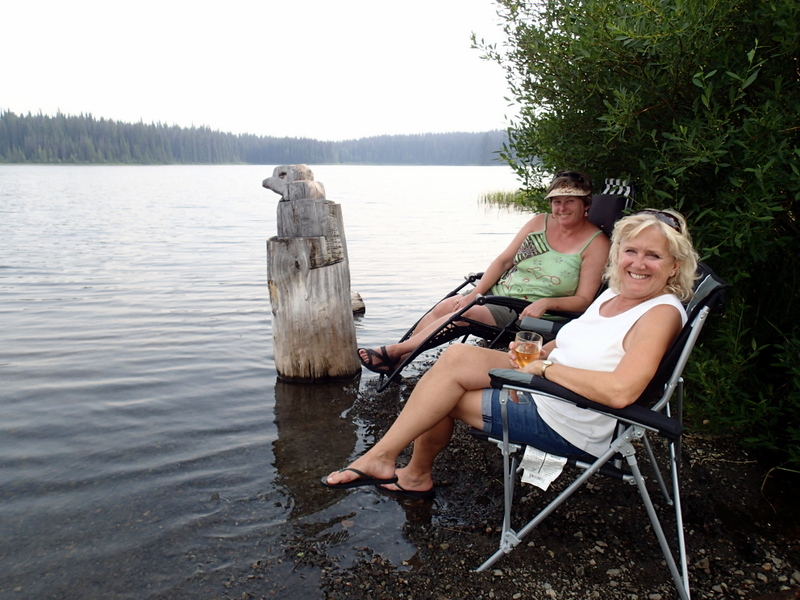 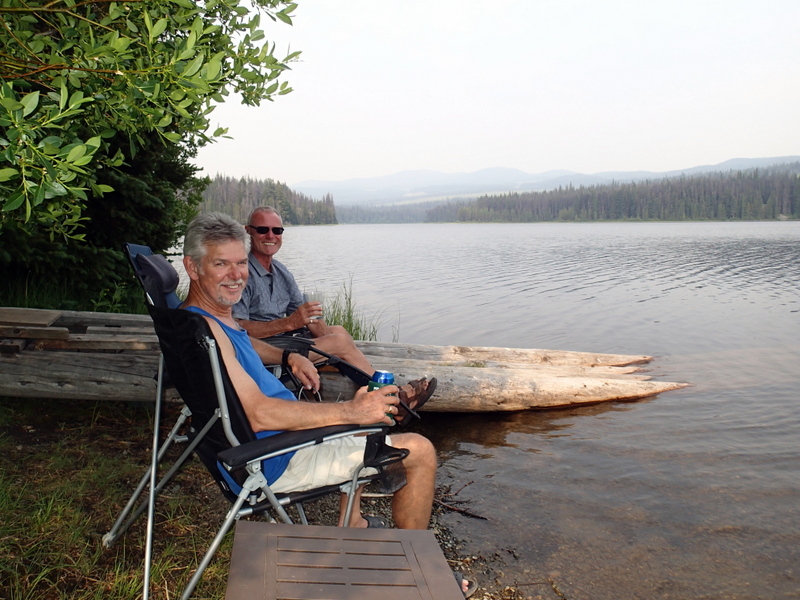 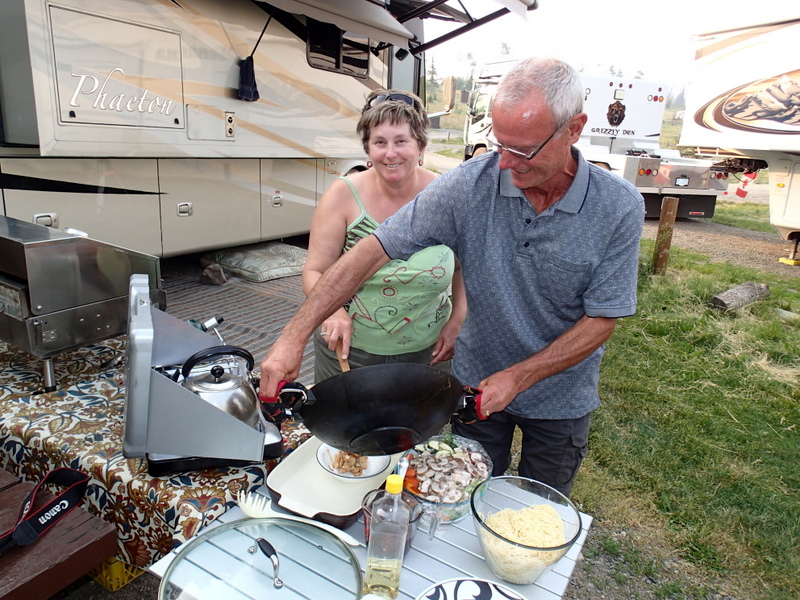 Deb made a deal with us...she would cook dinner for us tonight if we do dinner tomorrow night...it's a deal! Deb loves cooking and prepared a wonderful chicken chowmein dish along with barbecued chicken legs...delicious! Thanks so much! 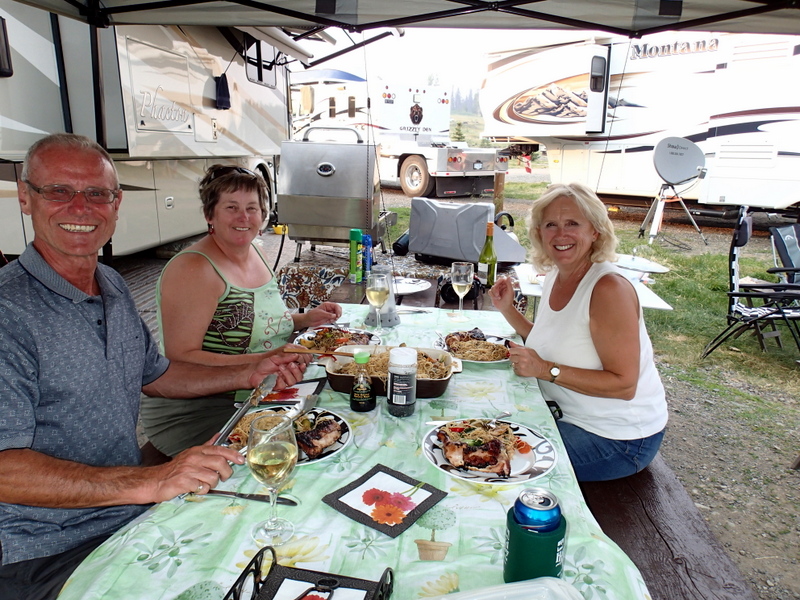 After dinner we sat chatting with an after dinner drink until about 9:30 and then decided to call it a night. I think we are going to like it here! Fishers out on the late evening...beautiful...