We had a beautiful sunrise Tuesday.... 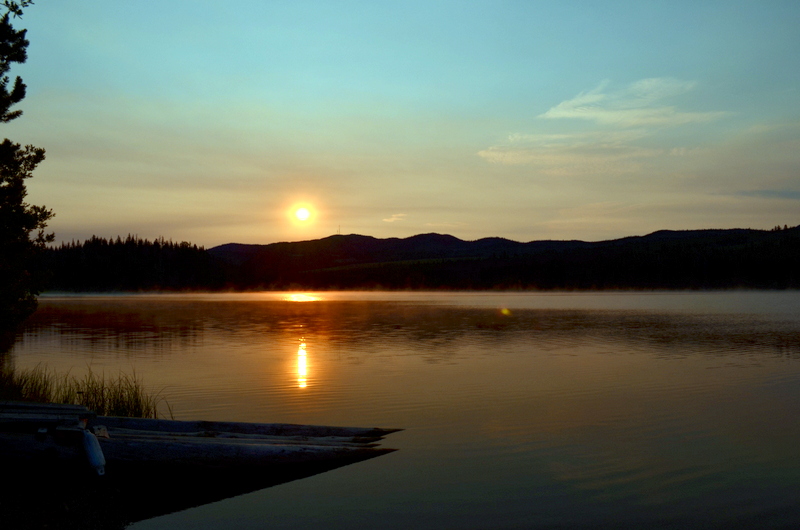 With a bunch of errands to run today, we thought we would drive into Logan Lake. It was about 9:00 when we headed off. I took a couple of pictures along the way.... 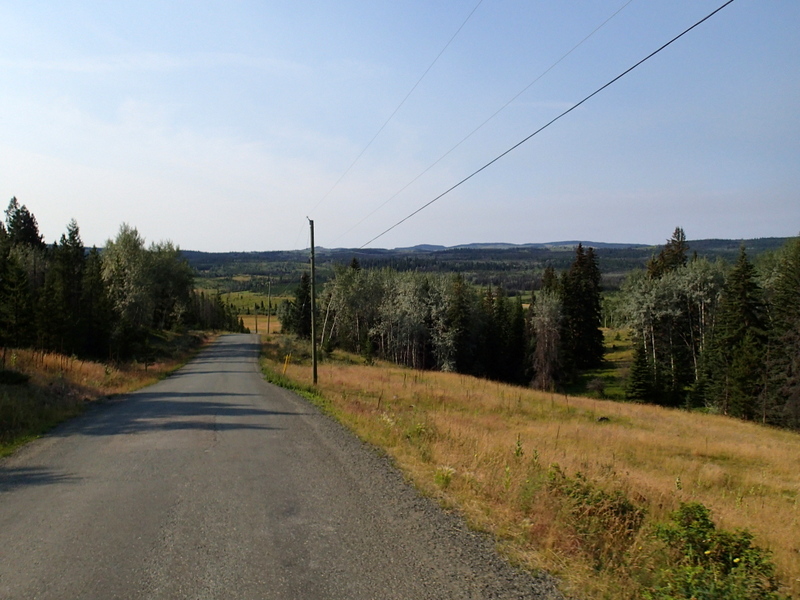 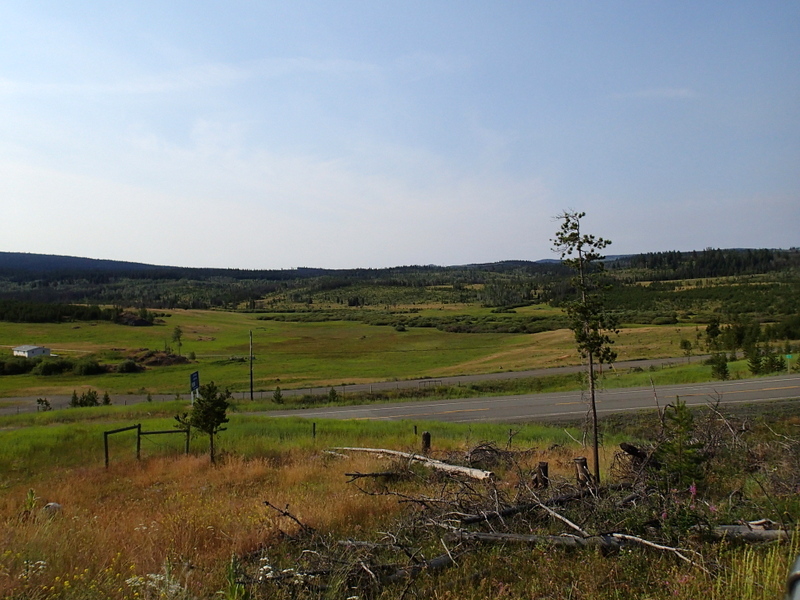 Steve dropped me off at the hotel where I sat in the coffee shop with my laptop working on our blog. While I was doing that, Steve got fresh water, gas and propane. Less than an hour later he was back...finished yet?, he says...ha...nowhere near! As they were ready, Steve took a look, editing and adding little bits. 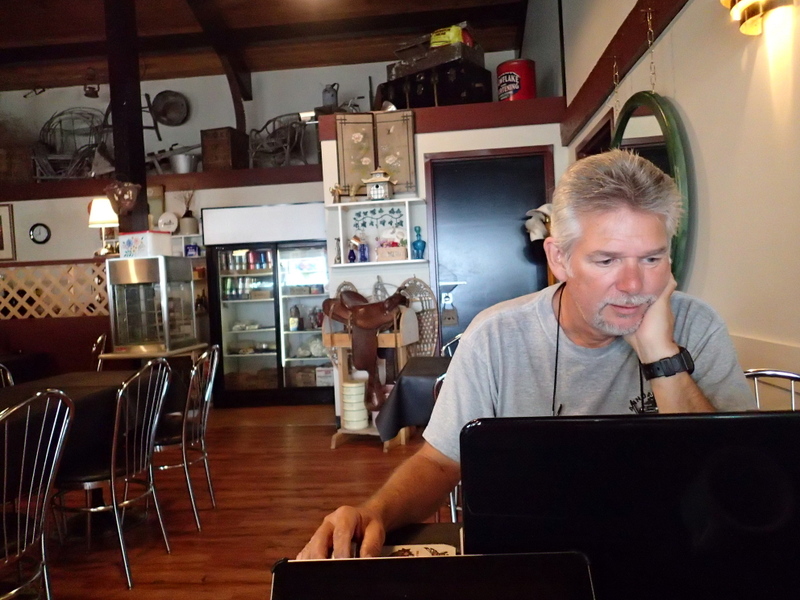 Four hours later, after numerous cups of coffee...and lunch, the blog was all up to date. After a stop at the liquor store and grocery store, we were on our way back home. It was going on 2:00 by this time.

Although the clouds were thick, the rain wasn't supposed to start until late this afternoon, so we thought we would get out for a bit of a ride on our quads. Tomorrow sounds like a right-off according to the weather...  rain is in the forecast with a chance of a severe thunderstorm.

Steve was just getting changed and I was getting the helmets out when we heard the pitter-patter of raindrops on the roof...hmmmm...so much for that idea!

Consequently, the rest of the day was spent inside....I read my book while Steve watched some TV and snoozed.

Wednesday morning we were both woken up before 5:00 by the "zzzzzz" sound of a mosquito taking turns dive-bombing us. After a couple of attempts with the fly zapper, Steve got him but by then the damage had been done...we were both wide awake. So needless to say, we were up very early! It wasn't a bad morning out there...the sun was shining intermittently through broken clouds. However, the weather forecasters say a big rainstorm with possible thunder and lightning is on its way.

We had had our morning coffee, done our exercises, Steve had showered and we'd had breakfast...all by 8:30 this morning! So Steve was out on the lake before 9:00 while I had my shower and then cleaned up the dishes. 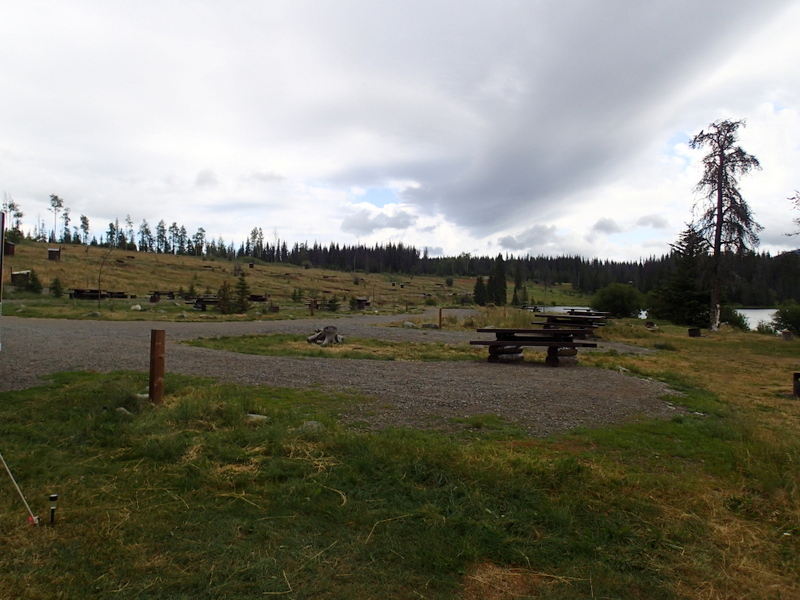 The other two campers in the campground left us this morning...we are all by ourselves now. Absolutely amazing...it's the middle of summer, for heaven's sake!

About an hour and a half later, Steve was back in...he'd caught one fish (catch and release) and lost a few but the wind was picking up, it was time to come in. 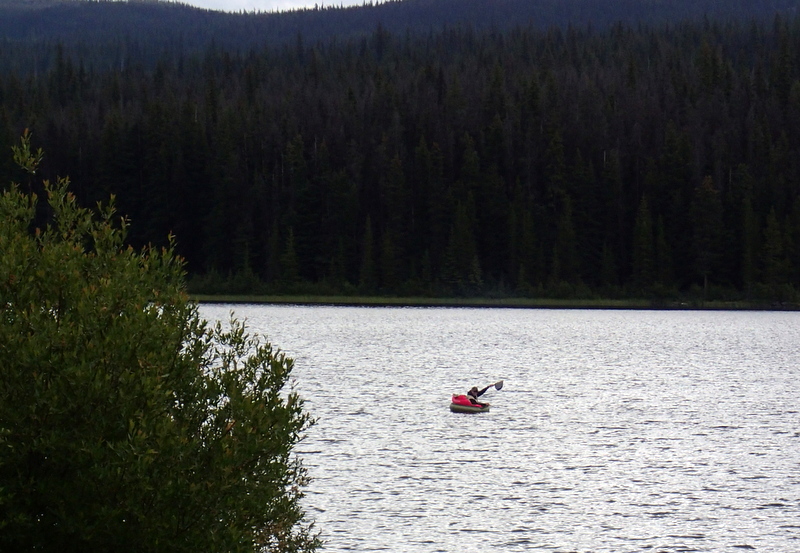 Steve gassed up the generator in preparation for the rain storm... 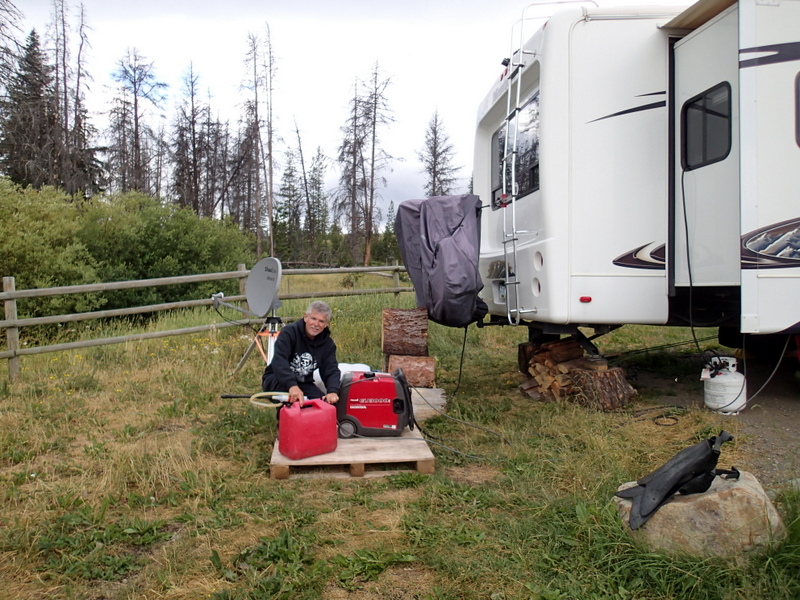 ...and then we thought we would try to get out for a walk around the campground before it started raining...well, we got started but had to turn around and run back as it started to rain. 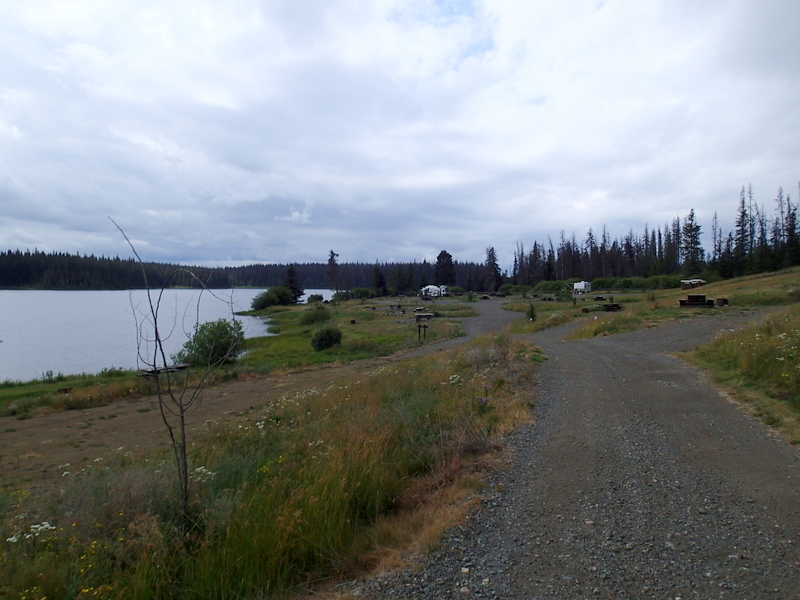 We sat inside for a bit but when the rain didn't really develop into much, we went outside to our chairs where we read...Steve, his magazine and me, my book. The dark clouds were coming in and we could hear thunder in the distance...sounds like the storm is on its way! 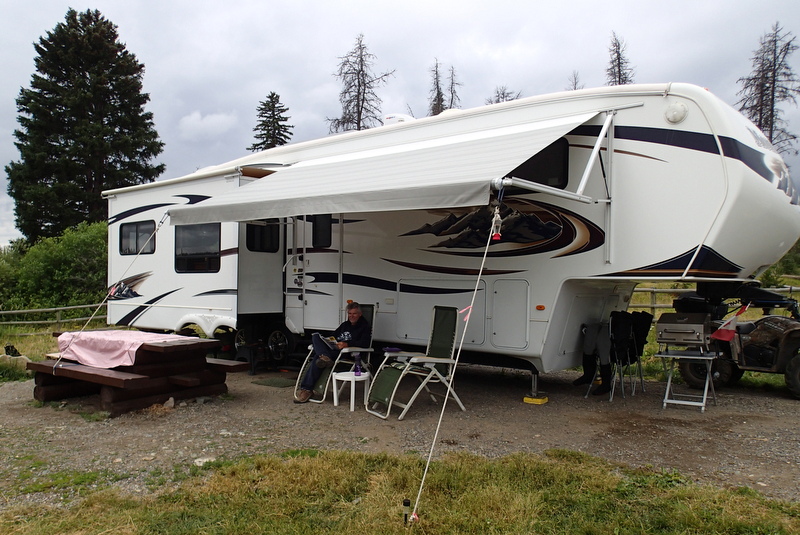 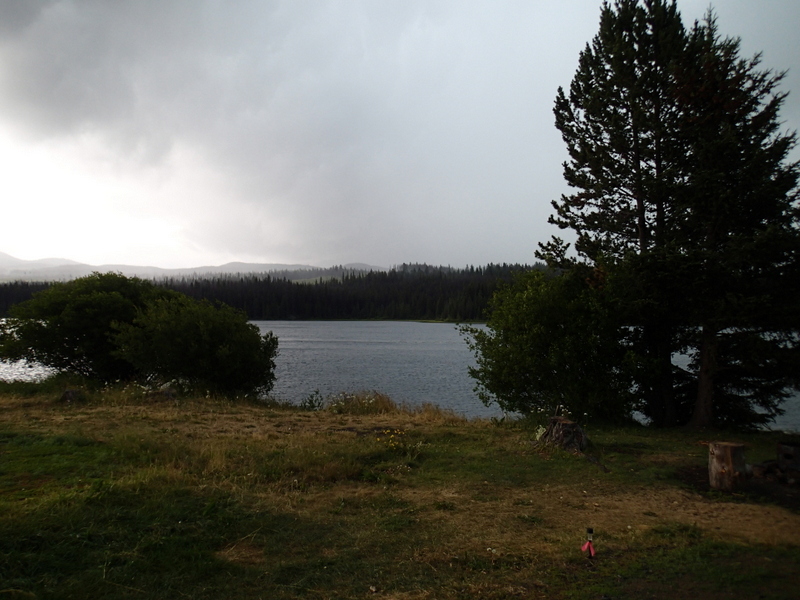 We had gone inside, and after having lunch, decided to just stay put. The thunder was getting closer. Well, it was about 1:30 when one hellava thunder/lightning storm came through...complete with strong winds, heavy rain and hail! 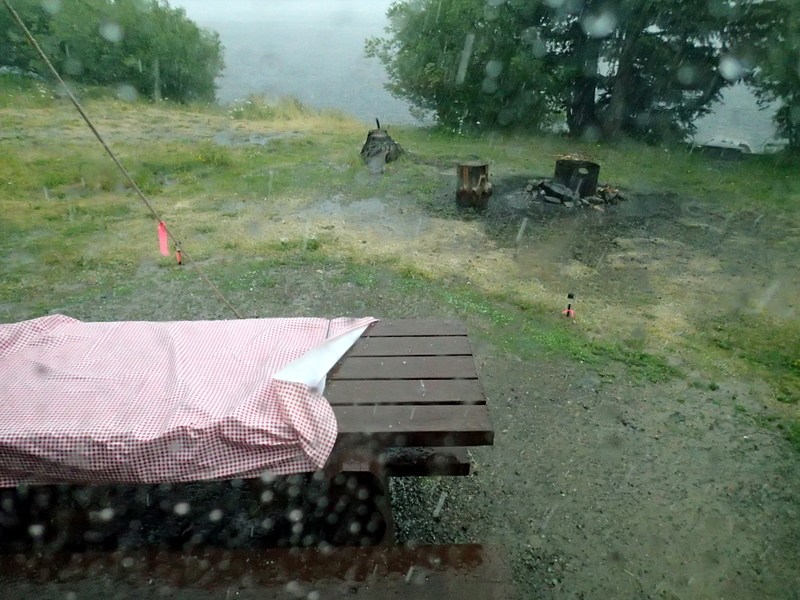 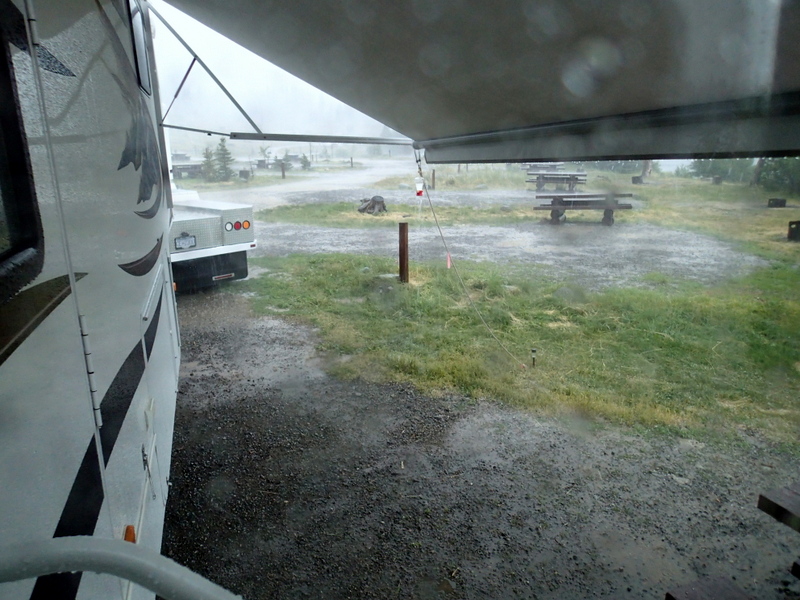 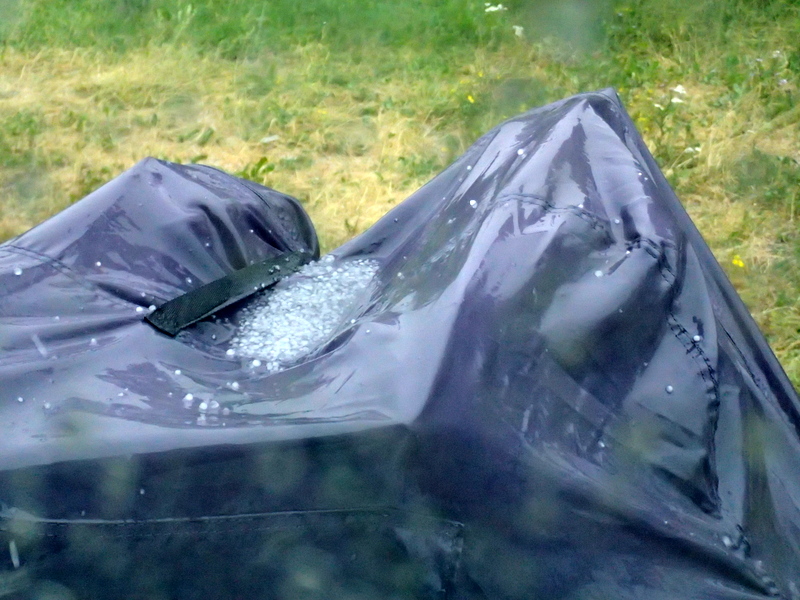 Steve went out a little later and gathered a handful of hail that had come off of the awning... 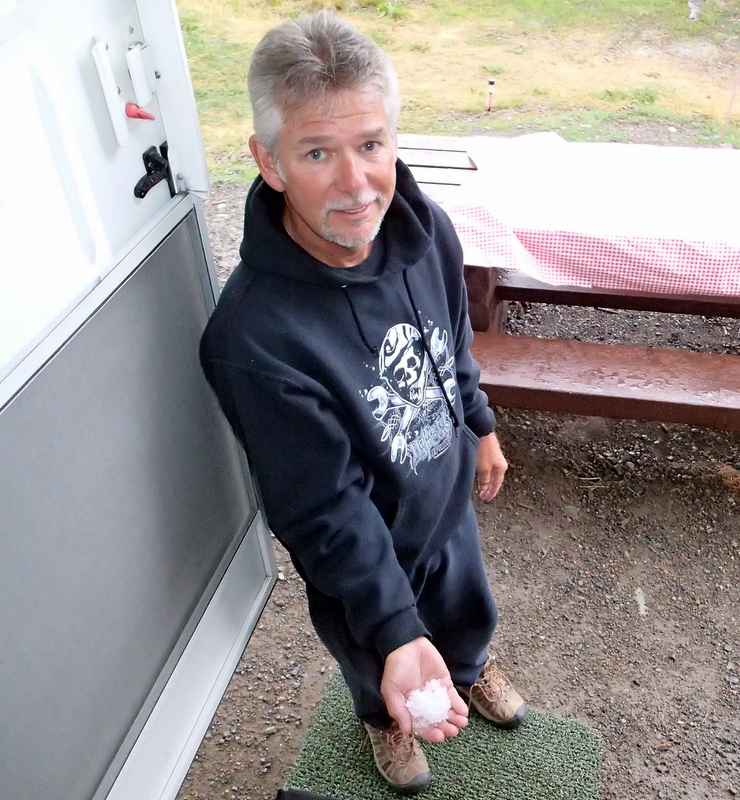 The main storm lasted for about 20 minutes but the rain continued for the rest of the afternoon. About an hour later there was one bright flash of lightening above the lake and an immediate booooom! Wow...that was close! Now we are anxiously awaiting news that the campfire ban has been removed for the area!

We woke Thursday to the sound of pitter-patter on the roof...hmmmm....it's going to be that kind of day, is it? It was also going on 7:30 by the time we got up...wow, we don't often sleep in that late...must have something to do with getting up so early yesterday.

And rain was the order of the day...there was pretty well steady rainfall all day. It was also very cool out...with temps not reaching much over 10C. We had the heater going for most of the day. So we sat inside all day...reading and watching TV. Steve did sit at the laptop for quite awhile, though, checking out the trails from here up to Greenstone Mountain and surrounding lakes. We have BC Backroads Maps on the laptop (and his GPS), so he was able to mark the best route (using "tracks"). Once that was done, we transferred the tracks to our GPS's...so we are ready for a quad ride when the weather improves.

A truck and trailer joined us here in the campground mid afternoon...not a very nice day to be travelling and setting up camp. The rain stopped very late in the afternoon but it was still very chilly out. Perhaps if we could have had a campfire, we may have gone out but as far as we can tell the ban is still on...even with all of the rain we've had in the last couple of days. We asked the park facilitator when she came by to collect camping fees but she said it was still on.

Just before 8:00, we got out for a walk around the campground...well, we got a little exercise and fresh air after a day of doing nothing but sitting inside!